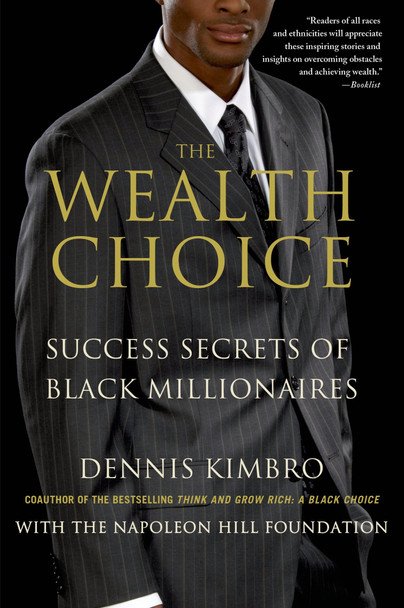 Approximately 35 percent of African Americans had no measurable assets in 2009, and 24 percent of these same households had only a motor vehicle. Dennis Kimbro, observing how the weight of the continuing housing and credit crises disproportionately impacts the African-American community, takes a sharp look at a carefully cultivated group of individuals who've scaled the heights of success and how others can emulate them. Based on a seven year study of 1,000 of the wealthiest African Americans, The Wealth Choice offers a trove of sound and surprising advice about climbing the economic ladder, even when the odds seem stacked against you.

Readers will learn about how business leaders, entrepreneurs, and celebrities like Bob Johnson, Spike Lee, L. A. Reid, Herman Cain, T. D. Jakes and Tyrese Gibson found their paths to wealth; what they did or didn't learn about money early on; what they had to sacrifice to get to the top; and the role of discipline in managing their success. Through these stories, which include men and women at every stage of life and in every industry, Dennis Kimbro shows readers how to:

· Develop a wealth-generating mindset and habits

· Craft goals that match your passion

The book, The Wealth Choice: Success Secrets of Black Millionaires [Bulk, Wholesale, Quantity] ISBN# 9781137279149 in Paperback by Dennis Kimbro may be ordered in bulk quantities. Minimum starts at 25 copies. Availability based on publisher status and quantity being ordered.

Secrets for Success and Happiness

MSRP:
Now:
As low as
Was:
It's safe to say that world-famous speaker and author Og Mandino has as many friends as any man alive, thanks to his inspiring motivational lectures and his bestselling books. This new book is a...

MSRP:
Now:
As low as
Was:
Updated so that it speaks to today's students, this long-time Barron's bestseller presents strategies to improve test scores, a plan to help students develop regular and effective study habits, tips...

MSRP:
Now:
As low as
Was:
NEW EDITION--REVISED AND UPDATED with all-new chapters on productivity! Legendary business coach and entrepreneur Dean Graziosi takes you from where you are in life to where you want to be, using...

The Laws of Wealth: Psychology and the Secret to Investing Success

MSRP:
Now:
As low as
Was:
From New York Times and USA Today bestselling author, Dr Daniel Crosby, comes the behavioral finance book all investors have been waiting for. In The Laws of Wealth, psychologist and behavioral...

Secrets of the Millionaire Mind: Mastering the Inner Game of Wealth

MSRP:
Now:
As low as
Was:
Secrets of the Millionaire Mind reveals the missing link between wanting success and achieving it! Have you ever wondered why some people seem to get rich easily, while others are destined for a...

Do This, Not That: Career: What to Do (and NOT Do) in 75+ Difficult Workplace Situations

MSRP:
Now:
As low as
Was:
How do you deal with a difficult boss who is always unavailable? How should you handle a coworker who never completes their portion of a project on schedule? How can you establish a strong work-life...

MSRP:
Now:
As low as
Was:
In Know What You're FOR, entrepreneur and thought leader Jeff Henderson makes it clear that if we want to change the world with our products or our mission, then we must shift the focus of our...

Who Rocked the Boat?: A Story about Navigating the Inevitability of Change

MSRP:
Now:
As low as
Was:
In this FranklinCovey book on managing change, explore your own experiences with change using a river journey parable as a point-of-reference. Take this voyage and discover timeless principles and...

MSRP:
Now:
As low as
Was:
You don’t have to be educated or connected to be wealthy How do wealthy people do it? Are they geniuses? Lucky? We tend to think something special must be going on because it looks like magic...

MSRP:
Now:
As low as
Was:
Despite investing billions of dollars, the world's institutions are making scant progress toward the promise of diversity, equity, and inclusion. The central cause: top leaders lack the means to...

MSRP:
Now:
As low as
Was:
Jonathan Smart, business agility practitioner, thought leader, and coach, reveals patterns and antipatterns to show how business leaders from every industry can help their organizations deliver...

MSRP:
Now:
As low as
Was:
Catalog Copy: Walt’s Apprentice: Keeping the Disney Dream Alive is the memoir of Disney Legend Dick Nunis. It is a warm personal reminiscence of learning directly from Walt Disney for 12 years,...

MSRP:
Now:
As low as
Was:
The 1619 Project’s lyrical picture book in verse chronicles the consequences of slavery and the history of Black resistance in the United States, thoughtfully rendered by Pulitzer Prize-winning...