Them: Why We Hate Each Other--And How to Heal [Hardcover] 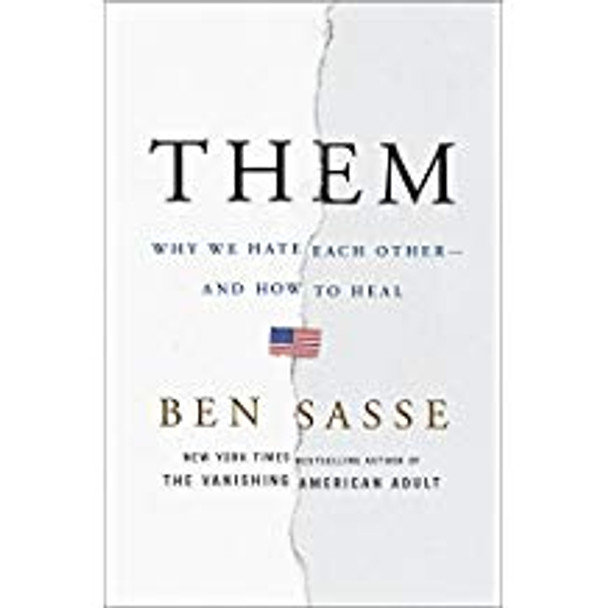 Them: Why We Hate Each Other--And How to Heal [Hardcover]

From the New York Times bestselling author of The Vanishing American Adult, an intimate and urgent assessment of the existential crisis facing our nation.

Something is wrong. We all know it.

American life expectancy is declining for a third straight year. Birth rates are dropping. Nearly half of us think the other political party isn’t just wrong; they’re evil. We’re the richest country in history, but we’ve never been more pessimistic.

In Them, bestselling author and U.S. senator Ben Sasse argues that, contrary to conventional wisdom, our crisis isn’t really about politics. It’s that we’re so lonely we can’t see straight—and it bubbles out as anger.

As traditional tribes of place evaporate, we rally against common enemies so we can feel part of a team. No institutions command widespread public trust, enabling foreign intelligence agencies to use technology to pick the scabs on our toxic divisions. We’re in danger of half of us believing different facts than the other half, and the digital revolution throws gas on the fire.

There’s a path forward—but reversing our decline requires something radical: a rediscovery of real places and human-to-human relationships. Even as technology nudges us to become rootless, Sasse shows how only a recovery of rootedness can heal our lonely souls.

America wants you to be happy, but more urgently, America needs you to love your neighbor and connect with your community. Fixing what's wrong with the country depends on it.

The book, Them: Why We Hate Each Other--And How to Heal [Bulk, Wholesale, Quantity] ISBN# 9781250193681 in Hardcover by Ben Sasse may be ordered in bulk quantities. Minimum starts at 25 copies. Availability based on publisher status and quantity being ordered.
View AllClose

Love, Hate and Other Filters [Hardcover]

MSRP:
Now: $18.99
Was:
A NEW YORK TIMES BESTSELLER In this unforgettable debut novel, an Indian-American Muslim teen copes with Islamophobia, cultural divides among peers and parents, and a reality she can neither explain...

Nincompoopery: Why Your Customers Hate You--And How to Fix It

MSRP:
Now: $24.99
Was:
Nincompoopery--terrible customer service, idiotic business processes, and soul-crushing management practices--surrounds all of us. We lose time, patience, and profits as stuck-in-the-past...

Why We Took the Car [Hardcover]

MSRP:
Now: $17.99
Was:
Mike Klingenberg is a troubled fourteen-year-old from a disfunctional family in Berlin who thinks of himself as boring, so when a Russian juvenile delinquent called Tschick begins to pay attention to...

Outspoken: Why Women's Voices Get Silenced and How to Set Them Free

MSRP:
Now: $29.99
Was:
A big think, conversation-changing book, full of practical advice, about how women can learn to claim the power of their voices in the workplace and at home, and what needs to change so they can...

Feedback (and Other Dirty Words): Why We Fear It, How to Fix It

MSRP:
Now: $18.95
Was:
A practical and irreverent guide to taking the sting out of feedback and reclaiming it as a motivating, empowering experience for everyone involved. Feedback: the mere mention of the word can make...

The Stories of Eva Luna [Paperback]

MSRP:
Now: $17.00
Was:
Isabel Allende is one of the world's most beloved authors. In 1988, she introduced the world to Eva Luna in a novel of the same name that recounted the adventurous life of a young Latin American...

MSRP:
Now: $28.00
Was:
Reclaim your time, money, health, and happiness from our toxic diet culture with groundbreaking strategies from a registered dietitian, journalist, and host of the "Food Psych" podcast. 68 percent...

MSRP:
Now: $35.00
Was:
Film historian and acclaimed New York Times bestselling biographer Scott Eyman has written the definitive biography of Hollywood legend Cary Grant, one of the most accomplished—and beloved—actors of...

If I'm Being Honest

MSRP:
Now: $10.99
Was:
Mean Girls meets The Taming of the Shrew in this romantic follow-up to Always Never Yours Cameron Bright's reputation can be summed up in one word: b*tch. It's no surprise she's queen bee at her...

MSRP:
Now: $17.99
Was:
Beep! Beep! Beep! Meet Blue. A muddy country road is no match for this little pick up--that is, until he gets stuck while pushing a dump truck out of the muck. Luckily, Blue has made a pack of farm...

The First Strawberries: A Cherokee Story

MSRP:
Now: $6.99
Was:
From an award-winning Native American storyteller comes this captivating re-telling of a Cherokee legend, which explains how strawberries came to be. Long ago, the first man and woman quarrelled. The...

MSRP:
Now: $30.00
Was:
The workplace has become a hotbed of social toxicity – from the #MeToo movement to WeWork, it's clear that abusive bosses and entrenched cultures of discrimination have become more prevalent than...