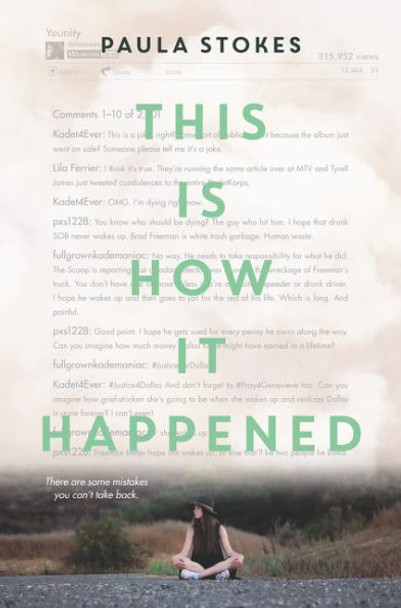 The author of Girl Against the Universe and Liars, Inc. plunges readers into a world where the internet is always watching—and judging—in this compelling story about mistakes, repercussions, and online vigilante justice. Perfect for fans of Sarah Darer Littman’s Backlash or Robyn Schneider’s The Beginning of Everything. After waking up from a coma, Genevieve Grace can’t remember the car crash that killed her boyfriend Dallas, a YouTuber turned teen music idol. Genevieve knows she was driving, but because of what's been reported in the media, everyone assumes the other driver, Brad Freeman, is guilty. As she slowly pieces together the night of the accident, Genevieve is hit with a sickening sense of dread—what if she's the one at fault? While the internet and social media viciously condemn Brad, Genevieve escapes to her father’s house near Zion National Park to hide from curious classmates and intrusive reporters. But she quickly realizes that she can’t run away from the accident. And eventually, she will have to come to grips with what happened…and her role in it.

The book, This Is How It Happened [Bulk, Wholesale, Quantity] ISBN# 9780062379931 in Hardcover by Paula Stokes may be ordered in bulk quantities. Minimum starts at 25 copies. Availability based on publisher status and quantity being ordered.
View AllClose

It Happened in New Mexico

MSRP:
Now:
As low as
Was:
True Tales from New Mexico's Past. From the life and times of Folsom Man (9,000 BC) to the Great Prison Riot of Santa Fe County (1980 AD), It Happened in New Mexico tells the stories of intriguing...

MSRP:
Now:
As low as
Was:
Hillary Rodham Clinton is the first woman in US history to become the presidential nominee of a major political party. She served as the 67th Secretary of State—from January 21, 2009, until February...

And Then What Happened, Paul Revere?

MSRP:
Now:
As low as
Was:
Everyone knows about Paul Revere's midnight ride. But not everyone knows the harrowing details and narrow escapes that occurred along the way. This timeless and witty book highlights little-known...

MSRP:
Now:
As low as
Was:
Sherman Smith saw the most terrible thing happen. At first he tried to forget about it, but something inside him started to bother him. He felt nervous and had bad dreams. Then he met someone who...

How the Internet Happened: From Netscape to the iPhone

EllRay Jakes Is Not a Chicken!

MSRP:
Now:
As low as
Was:
EllRay Jakes is tired of being bullied by fellow classmate Jared Matthews. But when EllRay tries to defend himself, he winds up in trouble. Then his dad offers him a deal: If he stays out of trouble...

MSRP:
Now:
As low as
Was:
Do you want to lose weight? BLAST the Sugar Out! will guide you to eat well―and frequently―while controlling carbohydrates and dropping pounds to get to goal. You will lose weight on this diet―and...

MSRP:
Now:
As low as
Was:
A gently humorous, strikingly illustrated guide to the different catnap positions favored by felines—and what they reveal about each cat’s personality. How does your cat like to nap? It’s well...

It's So Much Work to Be Your Friend: Helping the Child with Learning Disabilities Find Social Success

MSRP:
Now:
As low as
Was:
Answers the most intense need of parents, teachers, and caregivers of learning disabled children -- or anyone who knows a child who needs a friend. ADHD • Anxiety • Nonverbal • Communication •...

The Big Five: Five Simple Things You Can Do to Live a Longer, Healthier Life

MSRP:
Now:
As low as
Was:
The underlying promise of every exciting medical discovery, diet, and exercise program is the same: do this, buy this, or eat this and you will look better, live longer, and be healthier. But few...

MSRP:
Now:
As low as
Was:
Mia Tang has a lot of secrets. Number 1: She lives in a motel, not a big house. Every day, while her immigrant parents clean the rooms, ten-year-old Mia manages the front desk of the Calivista Motel...