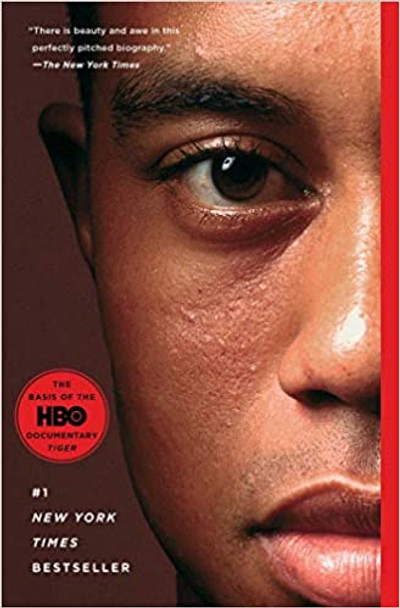 The inspiration for the HBO documentary from Academy Award–winning producer Alex Gibney.

The #1 New York Times bestseller based on years of reporting and interviews with more than 250 people from every corner of Tiger Woods’s life—this “comprehensive, propulsive…and unsparing” (The New Yorker) biography is “an ambitious 360-degree portrait of golf’s most scrutinized figure…brimming with revealing details” (Golf Digest).

In 2009, Tiger Woods was the most famous athlete on the planet, a transcendent star of almost unfathomable fame and fortune living what appeared to be the perfect life. But it turned out he had been living a double life for years—one that exploded in the aftermath of a Thanksgiving night crash that exposed his serial infidelity and sent his personal and professional lives over a cliff. In this “searing biography of golf’s most blazing talent” (GOLF magazine), Jeff Benedict and Armen Keteyian dig deep behind the headlines to produce a richly reported answer to the question that has mystified millions of sports fans for nearly a decade: who is Tiger Woods, really?

Drawing on more than four hundred interviews with people from every corner of Woods’s life—many of whom have never spoken about him on the record before—Benedict and Keteyian construct a captivating psychological profile of a mixed race child programmed by an attention-grabbing father and the original Tiger Mom to be the “chosen one,” to change not just the game of golf, but the world as well. But at what cost? Benedict and Keteyian provide the starling answers in this definitive biography that is destined to linger in the minds of readers for years to come.

“Irresistible…Immensely readable…Benedict and Keteyian bring us along for the ride in a whirlwind of a biography that reads honest and true” (The Wall Street Journal). Ultimately, Tiger Woods is “a big American story…exhilarating, depressing, tawdry, and moving in almost equal measure” (The New York Times).

The book, Tiger Woods [Paperback] [Bulk, Wholesale, Quantity] ISBN# 9781501126444 in Paperback by Jeff Benedict may be ordered in bulk quantities. Minimum starts at 25 copies. Availability based on publisher status and quantity being ordered.
View AllClose

The White Tiger: A Novel [Paperback]

MSRP:
Now:
As low as
Was:
Winner of the Man Booker Prize 2008, this story of coruscating wit and blistering suspense explores modern Indian culture with charisma and shows that decency can still be found in a corrupt worldand...

MSRP:
Now:
As low as
Was:
Davey has never felt so alone in her life. Her father is deadshot in a holdupand now her mother is moving the family to New Mexico to try to recover. Climbing in the Los Alamos canyon, Davey meets...

Roaring Back: The Fall and Rise of Tiger Woods

MSRP:
Now:
As low as
Was:
The incredible true story of Tiger Woods’s dramatic return to glory at the 2019 Masters following his humbling and very public personal, physical, and professional setbacks. One publicly imploded...

The Second Life of Tiger Woods

MSRP:
Now:
As low as
Was:
From Michael Bamberger, author most recently of the New York Times best seller Men in Green, the intimate and extraordinary Tiger Woods comeback story, in which the iconic golfer - his game, body,...

Lies My Teacher Told Me: Everything Your American History Textbook Got Wrong [Paperback]

MSRP:
Now:
As low as
Was:
"Every teacher, every student of history, every citizen should read this book. It is both a refreshing antidote to what has passed for history in our educational system and a one-volume education in...

MSRP:
Now:
As low as
Was:
“Harvey offers surprising insights into the male mentality and gives women strategies for taming that unruly beast.” —Philadelphia Inquirer “Women should listen to Steve Harvey when it comes to...

The Sorrow of War: A Novel of North Vietnam [Paperback]

MSRP:
Now:
As low as
Was:
The daring and controversial novel that took the world by storm--a story of politics, selfhood, survival, and war. Heart-wrenching, fragmented, raw, former North Vietnamese solder Bao Ninh's The...

MSRP:
Now:
As low as
Was:
Winner of the 1963 Newbery Medal, A Wrinkle in Time is a unique classic that has captivated readers since it’s publication. Madeleine L’Engle’s story creates a world of fantasy and magic that young...

First, We Make the Beast Beautiful: A New Journey Through Anxiety

MSRP:
Now:
As low as
Was:
New York Times Bestseller "Probably the best book on living with anxiety that I’ve ever read.” – Mark Manson, #1 New York Times bestselling author of The Subtle Art of Not Giving a F*ck The Chinese...

MSRP:
Now:
As low as
Was:
When faced with a ’human error’ problem, you may be tempted to ask 'Why didn’t these people watch out better?' Or, 'How can I get my people more engaged in safety?' You might think you can solve your...

MSRP:
Now:
As low as
Was:
A beautiful and practical book on choosing and caring for over 100 easy-to-find houseplants, as well as inspiring plant styling advice and much more. Fresh flowers are great—everyone loves...

Black Magic: What Black Leaders Learned from Trauma and Triumph

MSRP:
Now:
As low as
Was:
A powerful exploration of Black achievement in a white world based on honest, provocative, and moving interviews with Black leaders, scientists, artists, activists, and champions. “I remember the...