To the Greatest Heights: Facing Danger, Finding Humility, and Climbing a Mountain of Truth 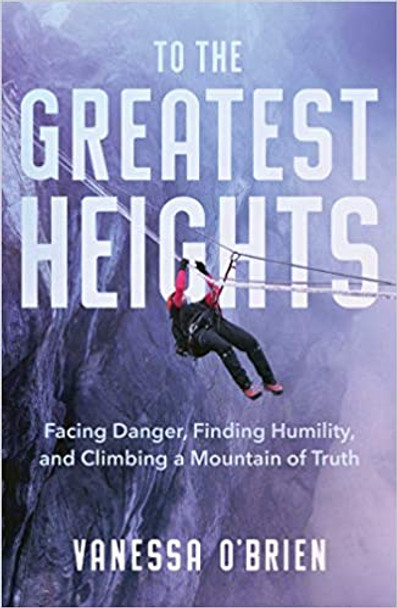 To the Greatest Heights: Facing Danger, Finding Humility, and Climbing a Mountain of Truth

This riveting and uplifting memoir by Vanessa O’Brien, record-breaking American-British explorer, takes you on an unexpected journey to the top of the world’s highest mountains.

Long before she became the first American woman to summit K2 and the first British woman to return from its summit alive, Vanessa O’Brien was a feisty suburban Detroit teenager forced to reinvent her world in the wake of a devastating loss that destroyed her family.

Making her own way in the world, Vanessa strove to reach her lofty ambitions. Soon, armed with an MBA and a wry sense of humor, she climbed the corporate ladder to great success, but after the 2009 economic meltdown, her career went into a tailspin. She searched for a new purpose and settled on an unlikely goal: climbing Mount Everest. When her first attempt ended in disaster, she trudged home, humbled but wiser. Two years later, she made it to the top of the world. And then she kept going.

Grounded by a cadre of wise-cracking friends and an inimitable British spouse, Vanessa held her own in the intensely competitive world of mountaineering, summiting the highest peak on every continent, and skiing the last degree to the North and South Poles. She set new speed records for the Seven Summits, receiving a Guinness World Record and the Explorers Grand Slam, and finally made peace with her traumatic past. During her attempt on K2, she very nearly gave up. But on the “savage mountain,” which kills one out of every four climbers who summit, Vanessa evolved from an adventurer out to challenge herself to an explorer with a high-altitude perspective on a changing world—and a new call to share her knowledge and passion across the globe.

Told with heart and humor, Vanessa’s journey from suburban Detroit to Everest’s Death Zone to the summit of K2 and beyond, is a transformative story of resilience, higher purpose, and the courage to overcome any obstacle.

The book, To the Greatest Heights: Facing Danger, Finding Humility, and Climbing a Mountain of Truth [Bulk, Wholesale, Quantity] ISBN# 9781982123789 in Hardcover by Vanessa O'Brien may be ordered in bulk quantities. Minimum starts at 25 copies. Availability based on publisher status and quantity being ordered.
View AllClose

To the Top!: Climbing the World's Highest Mountain

MSRP:
Now:
As low as
Was:
Illus. in full color. Here is the gripping story of Hillary and Norgay's perilous ascent of Mount Everest as they battled snow and ice slides, whipping winds, and the grim knowledge that 19 others...

MSRP:
Now:
As low as
Was:
This is a book about ten Great Ideas. Each chapter is an attempt to savor one idea that has been discovered by several of the world's civilizations-to question it in light of what we now know from...

MSRP:
Now:
As low as
Was:
Mega-Pastor and media personality John Gray uses powerful Biblical principles to help you become your best self -- the person God created you to be. In WIN FROM WITHIN, John Gray helps readers...

Overload: Finding the Truth in Today's Deluge of News

MSRP:
Now:
As low as
Was:
From the explosion of fake news to the challenges of the 24 hour news cycle, legendary journalist Bob Schieffer examines political journalism today and those who practice it. Based on interviews with...

In the Heights: Finding Home

MSRP:
Now:
As low as
Was:
The eagerly awaited follow-up to the #1 New York Times bestseller Hamilton: The Revolution, Lin-Manuel Miranda’s new book gives readers an extraordinary inside look at In the Heights, his breakout...

Holes in the Sky

MSRP:
Now:
As low as
Was:
Miss Eula is back! In this heartwarming companion to Chicken Sunday, young Trisha is devastated when her grandmother passes away, but finds joy in bonds with a new friend, her new California...

Deeply Grateful & Entirely Unsatisfied: A Book for Anyone Wondering If Life Is Giving You Magical Gifts or Just Messing with You

MSRP:
Now:
As low as
Was:
What does it mean to be vulnerable and defiant at the same time? In Deeply Grateful and Entirely Unsatisfied, author and artist Amanda Happé poses this question with disarming honesty and humor. Her...

Union: A Democrat, a Republican, and a Search for Common Ground

MSRP:
Now:
As low as
Was:
Two friends -- a Democrat and a Republican -- travel across America to better understand each other, and the country they love. In the year before Donald Trump was elected president, Jordan Blashek,...

En Espanol!... The book, En Espanol! [Bulk, Wholesale, Quantity] ISBN# 9780395958063 in Paperback by may be ordered in bulk quantities. Minimum starts at 25 copies. Availability based on publisher...

MSRP:
Now:
As low as
Was:
When a very curious little girl meets a cow named Luella who is even more stubborn than she is, who will be the first to back down? Phyllis Root’s spirited tall tale finds a family of countless...