Tough As They Come 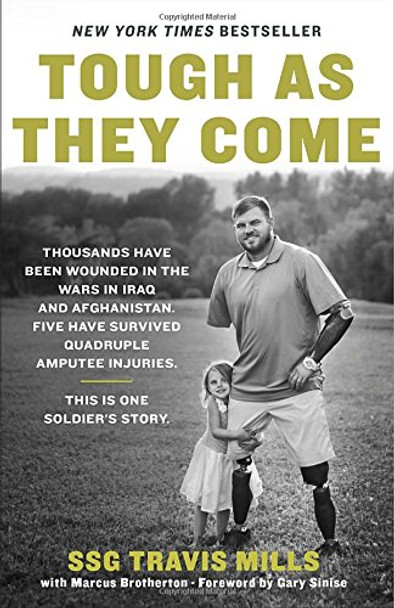 Tough As They Come

Thousands have been wounded in the wars in Iraq and Afghanistan. Five have survived quadruple amputee injuries. This is one soldier's story. Thousands of soldiers die year to defend their country. United States Army Staff Sergeant Travis Mills was sure that he would become another statistic when, during his third tour of duty in Afghanistan, he was caught in an IED blast four days before his twenty-fifth birthday. Against the odds, he lived, but at a severe cost—Travis became one of only five soldiers from the wars in Afghanistan and Iraq to survive a quadruple amputation. Suddenly forced to reconcile with the fact that he no longer had arms or legs, Travis was faced with a future drastically different from the one he had imagined for himself. He would never again be able to lead his squad, stroke his fingers against his wife’s cheek, or pick up his infant daughter. Travis struggled through the painful and anxious days of rehabilitation so that he could regain the strength to live his life to the fullest. With enormous willpower and endurance, the unconditional love of his family, and a generous amount of faith, Travis shocked everyone with his remarkable recovery. Even without limbs, he still swims, dances with his wife, rides mountain bikes, and drives his daughter to school. Travis inspires thousands every day with his remarkable journey. He doesn’t want to be thought of as wounded. “I'm just a man with scars,” he says, “living life to the fullest and best I know how.” — Winner, 67th Annual Christopher Award

The book, Tough As They Come [Bulk, Wholesale, Quantity] ISBN# 9781101904800 in Paperback by Travis Mills;Marcus Brotherton may be ordered in bulk quantities. Minimum starts at 25 copies. Availability based on publisher status and quantity being ordered.
View AllClose

MSRP:
Now:
As low as
Was:
I'm the new kid. I am tuf. This morning I beat up a kid.It's only the first day of school for Dexter, but he's already mad at the principal, and the secretary, and the janitor, and the kids who laugh...

MSRP:
Now:
As low as
Was:
#1 New York Times–bestselling author Jan Karon returns—with the story readers have been waiting for. Over the course of ten Mitford novels, fans have kept a special place in their hearts for Dooley...

MSRP:
Now:
As low as
Was:
Master storyteller Ralph Moody tells the thrilling story of a plucky horse who refused to quit, a down-on-his-luck jockey who didn’t let horrendous accidents keep him out of the saddle, and a...

As the Tide Comes In

MSRP:
Now:
As low as
Was:
When her big sister Violet has friend trouble at school, Dory tries to come to her rescue. But, of course, Dory's active imagination takes over, and Dory's suddenly sure that Violet's problem...

This Time Will Be Different

MSRP:
Now:
As low as
Was:
Acclaimed author Rita Williams-Garcia gives readers an intimate, gritty portrayal of three very different teens on the day when everything collides. Trina: "Hey," I say, though I don't really know...

Teach Like a Champion : 49 Techniques That Put Students on the Path to College [Paperback]

MSRP:
Now:
As low as
Was:
A comprehensive resource filled with the techniques that have proven it is possible to close the achievement gap.... The book, Teach Like a Champion : 49 Techniques That Put Students on the Path to...

MSRP:
Now:
As low as
Was:
An account of Sir John Cotesworth Slessor (1897-1979), one of Great Britain's most influential airmen Sir John Slessor played a significant role in building the World War II Anglo-American air...

MSRP:
Now:
As low as
Was:
A guide to successfully getting the life you want by changing your perspective and discovering your ideal self. More often than not, our own mental obstacles are holding us back from the joy,...

We Walked the Sky

MSRP:
Now:
As low as
Was:
A stunning, multigenerational story about two teenagers: Victoria, who joins the circus in 1965, and her granddaughter, Callie, who leaves the circus fifty years later. Perfect for fans of This is Us...

The Opposite of Hate: A Field Guide to Repairing Our Humanity

MSRP:
Now:
As low as
Was:
At a moment when we are facing an epidemic of incivility and hate—with divisive political speech, online trolling, and hate crimes escalating—popular CNN commentator Sally Kohn sets out to discover...