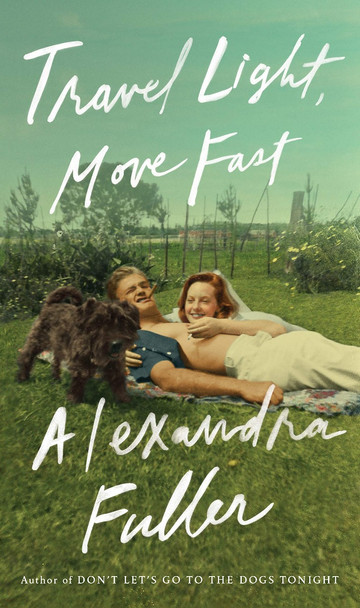 From bestselling author Alexandra Fuller, the utterly original story of her father, Tim Fuller, and a deeply felt tribute to a life well lived

Six months before he died in Budapest, Tim Fuller turned to his daughter: “Let me tell you the secret to life right now, in case I suddenly give up the ghost." Then he lit his pipe and stroked his dog Harry’s head. Harry put his paw on Dad’s lap and they sat there, the two of them, one man and his dog, keepers to the secret of life. “Well?” she said. “Nothing comes to mind, quite honestly, Bobo,” he said, with some surprise. “Now that I think about it, maybe there isn’t a secret to life. It’s just what it is, right under your nose. What do you think, Harry?” Harry gave Dad a look of utter agreement. He was a very superior dog. “Well, there you have it,” Dad said.

After her father’s sudden death, Alexandra Fuller realizes that if she is going to weather his loss, she will need to become the parts of him she misses most. So begins Travel Light, Move Fast, the unforgettable story of Tim Fuller, a self-exiled black sheep who moved to Africa to fight in the Rhodesian Bush War before settling as a banana farmer in Zambia. A man who preferred chaos to predictability, to revel in promise rather than wallow in regret, and who was more afraid of becoming bored than of getting lost, he taught his daughters to live as if everything needed to happen all together, all at once—or not at all. Now, in the wake of his death, Fuller internalizes his lessons with clear eyes and celebrates a man who swallowed life whole.

A master of time and memory, Fuller moves seamlessly between the days and months following her father’s death, as she and her mother return to his farm with his ashes and contend with his overwhelming absence, and her childhood spent running after him in southern and central Africa. Writing with reverent irreverence of the rollicking grand misadventures of her mother and father, bursting with pandemonium and tragedy, Fuller takes their insatiable appetite for life to heart. Here, in Fuller’s Africa, is a story of joy, resilience, and vitality, from one of our finest writers.

The book, Travel Light, Move Fast [Bulk, Wholesale, Quantity] ISBN# 9781594206740 in Hardcover by Alexandra Fuller may be ordered in bulk quantities. Minimum starts at 25 copies. Availability based on publisher status and quantity being ordered.
View AllClose

MSRP:
Now: $12.95
Was:
Don’t read this book—play it! Introducing an ingenious way to help kids get the 60 minutes of active play they need each day. Move! is a book that combines imaginative play with movement. Hold it up...

MSRP:
Now: $29.00
Was:
Move Fast and Break Things tells the story of how a small group of libertarian entrepreneurs began in the 1990s to hijack the original decentralized vision of the Internet, in the process creating...

MSRP:
Now: $8.99
Was:
Reverse spin, triple pump, reverse dribble, stutter step with twist to the left, stutter into jumper, blind pass. These are me. The moves make the man. The moves make me. Jerome foxworthy -- the...

MSRP:
Now: $28.00
Was:
The dramatic true story of two brothers living parallel lives on either side of the U.S.-Mexico border—and how their lives converged in a major criminal conspiracy José and Miguel Treviño were bonded...

Only One Life: How a Woman's Every Day Shapes an Eternal Legacy

MSRP:
Now: $16.99
Was:
Life keeps us running so fast and frenzied that we often lose sight of each day’s holy potential. Yet as a woman loved and called by God, your ordinary everyday matters more than you could possibly...

If the Dinosaurs Came Back

MSRP:
Now: $22.95
Was:
As leaders, how we are is as important as what we do. The second edition of a leadership classic, updated with new chapters, shows how to master the inner and outer work needed to build relationships...

Uncomfortable Conversations with a Black Man

MSRP:
Now: $27.99
Was:
An urgent primer on race and racism, from the host of the viral hit video series “Uncomfortable Conversations with a Black Man”. “You cannot fix a problem you do not know you have.” So begins...

MSRP:
Now: $27.99
Was:
Now a documentary narrated by Common, produced by Grant Hill, Dwyane Wade, and 9th Wonder, from filmmaker Mary Mazzio The moving true story of a group of young men growing up on Chicago's West...