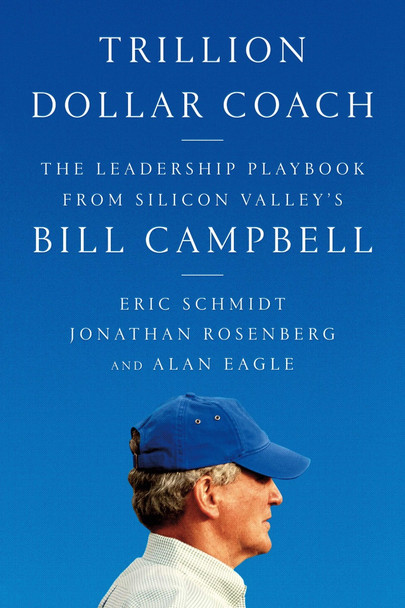 **A 2019 OWL AWARD SHORTLIST WINNER IN THE LEADERSHIP CATEGORY**

The team behind How Google Works returns with management lessons from legendary coach and business executive, Bill Campbell, whose mentoring of some of our most successful modern entrepreneurs has helped create well over a trillion dollars in market value.

Bill Campbell played an instrumental role in the growth of several prominent companies, such as Google, Apple, and Intuit, fostering deep relationships with Silicon Valley visionaries, including Steve Jobs, Larry Page, and Eric Schmidt. In addition, this business genius mentored dozens of other important leaders on both coasts, from entrepreneurs to venture capitalists to educators to football players, leaving behind a legacy of growing companies, successful people, respect, friendship, and love after his death in 2016.

Leaders at Google for over a decade, Eric Schmidt, Jonathan Rosenberg, and Alan Eagle experienced firsthand how the man fondly known as Coach Bill built trusting relationships, fostered personal growth—even in those at the pinnacle of their careers—inspired courage, and identified and resolved simmering tensions that inevitably arise in fast-moving environments. To honor their mentor and inspire and teach future generations, they have codified his wisdom in this essential guide.

Based on interviews with over eighty people who knew and loved Bill Campbell, Trillion Dollar Coach explains the Coach’s principles and illustrates them with stories from the many great people and companies with which he worked. The result is a blueprint for forward-thinking business leaders and managers that will help them create higher performing and faster moving cultures, teams, and companies.

The book, Trillion Dollar Coach: The Leadership Playbook of Silicon Valley's Bill Campbell [Bulk, Wholesale, Quantity] ISBN# 9780062839268 in Hardcover by Eric Schmidt;Jonathan Rosenberg;Alan Eagle may be ordered in bulk quantities. Minimum starts at 25 copies. Availability based on publisher status and quantity being ordered.

Dad's Playbook: Wisdom for Fathers from the Greatest Coaches of All Time

MSRP:
Now:
As low as
Was:
This gift book for dad collects more than 100 inspiring quotes from the greatest coaches of all time. After all, dads do what the best coaches do: they motivate, mentor, discipline, and love. Author...

MSRP:
Now:
As low as
Was:
Every startup wants to change the world. But the ones who truly do know something the others don't: how to make government and regulation work for them. As startups use technology to shape the way...

MSRP:
Now:
As low as
Was:
An unforgettable story of four women who, through grit and ingenuity, became stars in the cutthroat, high-stakes, male dominated world of venture capital in Silicon Valley, and helped build some of...

Coaching for Performance: The Principles and Practice of Coaching and Leadership (5TH ed.)

MSRP:
Now:
As low as
Was:
Coaching for Performance is the definitive book for coaches, leaders, talent managers and professionals around the world. An international bestseller, featuring the influential GROW model, this book...

Full Out: Lessons in Life and Leadership from America's Favorite Coach

MSRP:
Now:
As low as
Was:
From the breakout star of Netflix’s Cheer, a motivational and inspiring guide to becoming a champion in all areas of life. In Full Out, “the Bill Belichick of cheerleading” (The Cut) Coach Monica...

It's the Manager: Gallup Finds the Quality of Managers and Team Leaders Is the Single Biggest Factor in Your Organization's Long-Term Success [Hardcover]

MSRP:
Now:
As low as
Was:
While the world’s workplace has been going through extraordinary historical change, the practice of management has been stuck in time for more than 30 years. The new workforce – especially younger...

Just Work: How to Root Out Bias, Prejudice, and Bullying to Build a Kick-Ass Culture of Inclusivity

MSRP:
Now:
As low as
Was:
**A 2019 OWL AWARD LONGLIST WINNER IN THE LEADERSHIP CATEGORY**Every great leader is a great storyteller. As a manager, CEO, or team leader, how can you innovatively engage your employees so that...

MSRP:
Now:
As low as
Was:
Perfect for fans of Percy Jackson and Mr. Lemoncello’s Library, Atlantis: The Accidental Invasion launches an exciting, action-packed new series about the underwater lost city Kaya, raised in the...

MSRP:
Now:
As low as
Was:
In her international work as a business coach and speaker, Julia Pimsleur has worked with thousands of high achievers, and she polled them to discover their greatest challenges — getting the right...

MSRP:
Now:
As low as
Was:
**A 2020 OWL AWARD SHORTLIST WINNER IN THE MANAGEMENT & CULTURE CATEGORY**Agile has the power to transform work--but only if it's implemented the right way. For decades business leaders have been...

MSRP:
Now:
As low as
Was:
**A 2019 OWL AWARD SHORTLIST WINNER IN THE SALES & MARKETING CATEGORY**Business Models for Transforming Customer Relationships What if there were a way to turn occasional, sporadic transactions...

Great Leaders Have No Rules: Contrarian Leadership Principles to Transform Your Team and Business

The Iconist: The Art and Science of Standing Out

MSRP:
Now:
As low as
Was:
**2019 OWL AWARD SALES & MARKETING CATEGORY WINNER**Why do we immediately recognize art by Van Gogh and Warhol? What does Beethoven share with Rage Against the Machine and Madonna? What makes us...