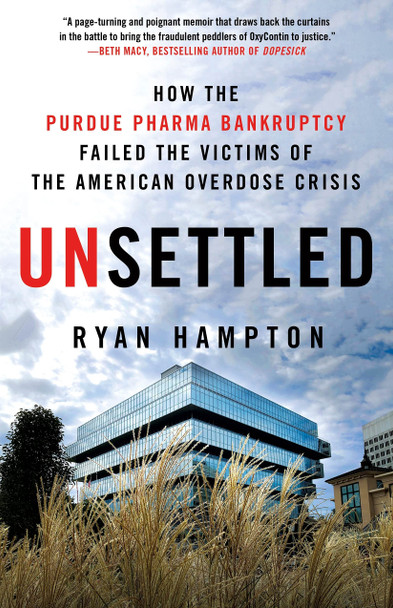 A shocking inside account of reckless capitalism and injustice in the Purdue Pharma bankruptcy case.

In September 2019, Purdue Pharma―the maker of OxyContin and a company controlled by the infamous billionaire Sackler family―filed for bankruptcy to protect itself from 2,600 lawsuits for its role in fueling the U.S. overdose crisis. Author and activist Ryan Hampton served as co-chair of the official creditors committee that acted as a watchdog during the process, one of only four victims appointed among representatives of big insurance companies, hospitals, and pharmacies. He entered the case believing that exposing the Sacklers and mobilizing against Purdue would be enough to right the scales of justice. But he soon learned that behind closed doors, justice had plenty of other competition―and it came with a hefty price tag.

Unsettled is the inside story of Purdue’s excruciating Chapter 11 bankruptcy proceedings, the company’s eventual restructuring, and the Sackler family’s evasion of any true accountability. It’s also the untold story of how a group of determined ordinary people tried to see justice done against the odds―and in the face of brutal opposition from powerful institutions and even government representatives.

Although America was envisioned as an equitable place, where the vulnerable are protected from the greed of the powerful, the corporate-bankruptcy process betrays those values. In its heart of hearts, this system is built to shield the ultra-wealthy, exploit loopholes for political power, promote gross wealth inequality, and allow companies such as Purdue Pharma to run amok.

The real story of the Purdue bankruptcy wasn’t that the billion-dollar corporation was a villain, a serial federal offender. No matter what the media said, Purdue didn’t do this alone. They were aided and abetted by the very systems and institutions that were supposed to protect Americans. Even on-your-side elected officials worked against Purdue’s victims―maintaining the status quo at all costs.

Americans deserve to know exactly who is responsible for failing to protect people over profits―and what a human life is worth to corporations, billionaires, and lawmakers. Unsettled is what happened behind closed doors―the story of a sick, broken system that destroyed millions of lives and let the Sacklers off almost scot-free.

The book, Unsettled: How the Purdue Pharma Bankruptcy Failed the Victims of the American Overdose Crisis [Bulk, Wholesale, Quantity] ISBN# 9781250273161 in Hardcover by Ryan Hampton may be ordered in bulk quantities. Minimum starts at 25 copies. Availability based on publisher status and quantity being ordered.
View AllClose

American Fix: Inside the Opioid Addiction Crisis - And How to End It [Paperback]

MSRP:
Now:
As low as
Was:
American Fix is a 2018 Outstanding Works of Literature (O.W.L.) Award Longlist Winner: http://awards.book-pal.com/2018-longlist. Nearly every American knows someone who has been affected by the...

MSRP:
Now:
As low as
Was:
A comprehensive portrait of a uniquely American epidemic--devastating in its findings and damning in its conclusions The opioid epidemic has been described as "one of the greatest mistakes of modern...

Taken for Granted: How Conservatism Can Win Back the Americans That Liberalism Failed

MSRP:
Now:
As low as
Was:
A Fox News political analyst tackles some of our communities’ toughest challenges with timely insight from his own life: the story of how conservative values helped a kid from the South Side of...

The American Crisis: What Went Wrong. How We Recover.

MSRP:
Now:
As low as
Was:
Some of America’s best reporters and thinkers offer an urgent look at a country in chaos in this collection of timely, often prophetic articles from The Atlantic. The past four years in the United...

MSRP:
Now:
As low as
Was:
A “deeply reported, deeply moving” (Patrick Radden Keefe) account of everyday heroes fighting on the front lines of the overdose crisis. From the New York Times bestselling author of Dopesick...

Cyber Crisis: Protecting Your Business from Real Threats in the Virtual World

MSRP:
Now:
As low as
Was:
Based on news reports, you might think there’s a major cybersecurity threat every four to five months. In reality, there’s a cybersecurity attack happening every minute of every day. Today, we live...

Our Team: The Epic Story of Four Men and the World Series That Changed Baseball

MSRP:
Now:
As low as
Was:
The riveting story of four men―Larry Doby, Bill Veeck, Bob Feller, and Satchel Paige―whose improbable union on the Cleveland Indians in the late 1940s would shape the immediate postwar era of Major...

Forward: Notes on the Future of Our Democracy

MSRP:
Now:
As low as
Was:
A lively and bold blueprint for moving beyond the “era of institutional failure” by transforming our outmoded political and economic systems to be resilient to twenty-first-century problems, from the...

Plagued: Pandemics from the Black Death to Covid-19 and Beyond

MSRP:
Now:
As low as
Was:
From the Black Death to Covid-19, pandemics have shaped and reshaped human society. Science and history can give us insight into two urgent questions: Why do they persist? And how can we survive...

Living in the Long Emergency: Global Crisis, the Failure of the Futurists, and the Early Adapters Who Are Showing Us the Way Forward

MSRP:
Now:
As low as
Was:
Forget the speculation of pundits and media personalities. For anyone asking “Now what?” the answer is out there. You just have to know where to look. In his 2005 book, The Long Emergency, James...

MSRP:
Now:
As low as
Was:
When Craig Cooper and Walker Hayes met, Walker was an alcoholic atheist reeling from the backlash of a failed music career. Through their unlikely friendship, Craig’s life demonstrated the love of...

Living Fully: Dare to Step Into Your Most Vibrant Life

MSRP:
Now:
As low as
Was:
An irresistible guide to living without holding back, from the vibrant lifestyle entrepreneur and host of the Living Fully podcast. Mallory Ervin is known for exuding energy, joy, and laughter...

South to America: A Journey Below the Mason-Dixon to Understand the Soul of a Nation

MSRP:
Now:
As low as
Was:
An essential, surprising journey through the history, rituals, and landscapes of the American South—and a revelatory argument for why you must understand the South in order to understand...

MSRP:
Now:
As low as
Was:
From the #1 New York Times bestselling coauthor of Game Change, John Heilemann, comes a cinematic, page-turning account of Joe Biden’s triumph over Donald Trump in a presidential election unlike any...