Utopia for Realists: How We Can Build the Ideal World 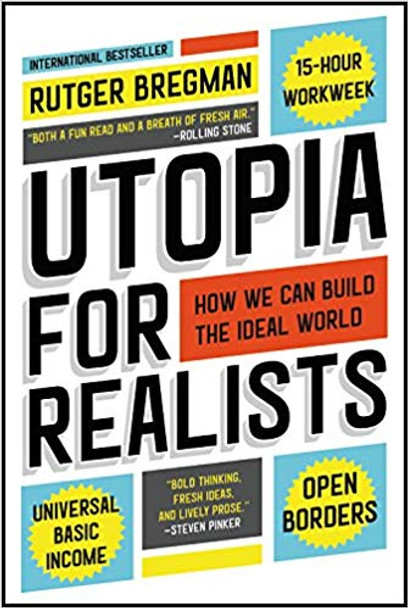 Utopia for Realists: How We Can Build the Ideal World

Universal basic income. A 15-hour workweek. Open borders. Does it sound too good to be true? One of Europe's leading young thinkers shows how we can build an ideal world today.

After working all day at jobs we often dislike, we buy things we don't need. Rutger Bregman, a Dutch historian, reminds us it needn't be this way-and in some places it isn't.

Rutger Bregman's TED Talk about universal basic income seemed impossibly radical when he delivered it in 2014. A quarter of a million views later, the subject of that video is being seriously considered by leading economists and government leaders the world over. It's just one of the many utopian ideas that Bregman proves is possible today.

Utopia for Realists is one of those rare books that takes you by surprise and challenges what you think can happen. From a Canadian city that once completely eradicated poverty, to Richard Nixon's near implementation of a basic income for millions of Americans, Bregman takes us on a journey through history, and beyond the traditional left-right divides, as he champions ideas whose time have come.

Every progressive milestone of civilization-from the end of slavery to the beginning of democracy-was once considered a utopian fantasy. Bregman's book, both challenging and bracing, demonstrates that new utopian ideas, like the elimination of poverty and the creation of the fifteen-hour workweek, can become a reality in our lifetime. Being unrealistic and unreasonable can in fact make the impossible inevitable, and it is the only way to build the ideal world.

The book, Utopia for Realists: How We Can Build the Ideal World [Bulk, Wholesale, Quantity] ISBN# 9780316471916 in Paperback by Rutger Bregman may be ordered in bulk quantities. Minimum starts at 25 copies. Availability based on publisher status and quantity being ordered.
View AllClose

What Can a Body Do?: How We Meet the Built World

MSRP:
Now:
As low as
Was:
A fascinating and provocative new way of looking at the things we use and the spaces we inhabit, and a call to imagine a better-designed world for us all. Furniture and tools, kitchens and campuses...

Why We Elect Narcissists and Sociopaths--And How We Can Stop

MSRP:
Now:
As low as
Was:
Bestselling author, therapist, lawyer, and mediator Bill Eddy describes how dangerous, high-conflict personalities have gained power in governments worldwide--and what citizens can do to keep these...

That Used to Be Us: How America Fell Behind in the World It Invented and How We Can Come Back

MSRP:
Now:
As low as
Was:
In That Used to Be Us, Thomas L. Friedman and Michael Mandelbaum analyze the four major challenges we face as a country---globalization, the revolution in information technology, chronic deficits,...

The Apology Impulse: How the Business World Ruined Sorry and Why We Can?t Stop Saying It

MSRP:
Now:
As low as
Was:
Saying sorry is in crisis. On one hand there are anxious PR aficionados and social media teams dishing out apologies with alarming frequency. On the other there are people and organizations who have...

The Third Side: Why We Fight and How We Can Stop

MSRP:
Now:
As low as
Was:
According to William Ury, it takes two sides to fight, but a third to stop. Distilling the lessons of two decades of experience in family struggles, labor strikes, and wars, he presents a bold new...

The Smartest Person in the Room: The Root Cause and New Solution for Cybersecurity

MSRP:
Now:
As low as
Was:
Cyberattack—an ominous word that strikes fear in the hearts of nearly everyone, especially business owners, CEOs, and executives. With cyberattacks resulting in often devastating results, it’s no...

A Complaint Free World: How to Stop Complaining and Start Enjoying the Life You Always Wanted

MSRP:
Now:
As low as
Was:
Available in paperback for the first time, the book by the creator of the "complaint free" philosophy has been revised and updated to address the worldwide phenomenon that followed its initial...

MSRP:
Now:
As low as
Was:
The key to success, salespeople are constantly told, is to follow specific steps and techniques. Just heed the advice of this guru or that speaker, and you’ll be the best! Well, that approach just...

My Three Best Friends and Me, Zulay [Hardcover]

MSRP:
Now:
As low as
Was:
Zulay and her three best friends are all in the same first grade class and study the same things, even though Zulay is blind. When their teacher asks her students what activity they want to do on...

MSRP:
Now:
As low as
Was:
When Zola moves into the neighborhood, her new next-door neighbor is too shy to go over and introduce herself. Plus, Zola already has a friend to play with—an elephant! What we imagine is not...

MSRP:
Now:
As low as
Was:
Melia is scientific and loves to create things in her backyard laboratory, but something is missing. Her inventions just aren’t quite right. Enter Jo, her new friend with an artistic spirit. When you...

Radical Alignment: How to Have Game-Changing Conversations That Will Transform Your Business and Your Life

MSRP:
Now:
As low as
Was:
Why do so many organizations, teams, couples, families, and groups who should be working together end up wasting energy on unproductive conflict? Even when everyone has the same general goals, what’s...

MSRP:
Now:
As low as
Was:
BlackTold: 33 Dynamic Essays from Andscape, is a collection of the most dynamic articles to have been published on the ESPN’s Andscape.com, a multi-media platform that publishes content exploring how...

MSRP:
Now:
As low as
Was:
Organizations use data to identify problems or opportunities. The actions others may need to take today from your insights in data could reverse or improve the trajectory of your future data. So,...

MSRP:
Now:
As low as
Was:
When businesses try to “do AI,” they place an abstract solution before problems and customers without fully considering whether it is wise, whether the hype is true, or how AI will impact their...