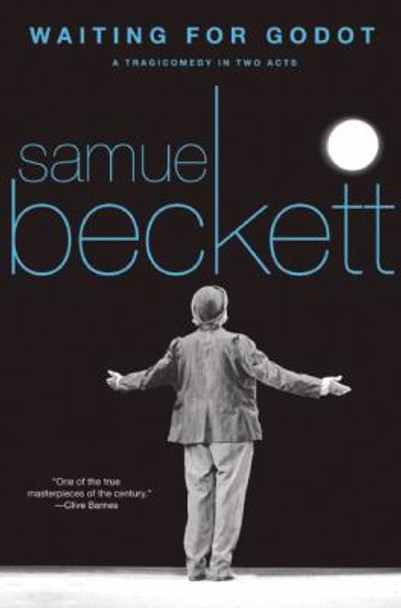 MSRP:
Now: List Price $14.00
Was:
— You save
Paperback
This product qualifies for FREE US Ground Shipping on orders over $100.

From an inauspicious beginning at the tiny Left Bank Theatre de Babylone in 1953, followed by bewilderment among American and British audiences, Waiting for Godot has become of the most important and enigmatic plays of the past fifty years and a cornerstone of twentieth-century drama. As Clive Barnes wrote, “Time catches up with genius … Waiting for Godot is one of the masterpieces of the century.” The story revolves around two seemingly homeless men waiting for someone—or something—named Godot. Vladimir and Estragon wait near a tree, inhabiting a drama spun of their own consciousness. The result is a comical wordplay of poetry, dreamscapes, and nonsense, which has been interpreted as mankind’s inexhaustible search for meaning. Beckett’s language pioneered an expressionistic minimalism that captured the existential post-World War II Europe. His play remains one of the most magical and beautiful allegories of our time.

The book, Waiting for Godot (Eng Rev): A Tragicomedy in Two Acts [Bulk, Wholesale, Quantity] ISBN# 9780802144423 in Paperback by Beckett, Samuel may be ordered in bulk quantities. Minimum starts at 25 copies. Availability based on publisher status and quantity being ordered.
View AllClose

MSRP:
Now:
As low as
Was:
Addie is waiting for normal. But Addie's mom has an all-or-nothing approach to life: a food fiesta or an empty pantry, jubilation or gloom, her way or no way. All or nothing never adds up to normal...

MSRP:
Now:
As low as
Was:
As Vladimir and Estragon await the arrival of Godot, they discuss their lives and consider hanging themselves, but choose to wait for Godot instead, in the hope that he can tell them their purpose...

MSRP:
Now:
As low as
Was:
Every spring, butterflies emerge and dazzle the world with their vibrant beauty. But where do butterflies come from? How are they born? What do they eat--and how? With a simple, rhyming text and...

MSRP:
Now:
As low as
Was:
A classic of modern theatre and perennial favorite of colleges and high schools. "One of the most noble and moving plays of our generation . . . suffused with tenderness for the whole human...

MSRP:
Now:
As low as
Was:
Caldecott Honor and Geisel Honor Book What are you waiting for? An owl, a puppy, a bear, a rabbit, and a pig—all toys arranged on a child’s windowsill—wait for marvelous things to happen in this...

MSRP:
Now:
As low as
Was:
A mysterious plague is decimating the population of colonial Mexico. One of His Majesty's highest physicians is dispatched from Spain to bring the latest advances in medical science to the backward...

MSRP:
Now:
As low as
Was:
A thrilling adventure classic-inthe- making! The night Martine Allen turns eleven years old is the night her life changes completely. Martine?s parents are killed in a fire, so she must leave her...

The Hobbit: Or There and Back Again [Hardcover]

MSRP:
Now:
As low as
Was:
Tolkien's "The Hobbit," which first appeared on the literary scene in 1937, sets the stage for the epic trilogy that Tolkien was to write in the coming years. Unabridged. 4 CDsThe book, The Hobbit...

MSRP:
Now:
As low as
Was:
Sheyann Webb was eight years old and Rachel West was nine when Dr. Martin Luther King Jr. arrived in Selma, Alabama, on January 2, 1965. He came to organize non-violent demonstrations against...

Prepared: What Kids Need for a Fulfilled Life

MSRP:
Now:
As low as
Was:
A blueprint for how parents can stop worrying about their children’s future and start helping them prepare for it, from the cofounder and CEO of one of America’s most innovative public-school...