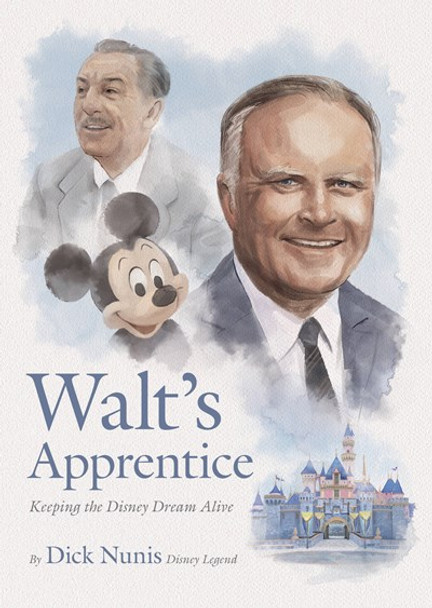 Catalog Copy: Walt’s Apprentice: Keeping the Disney Dream Alive is the memoir of Disney Legend Dick Nunis. It is a warm personal reminiscence of learning directly from Walt Disney for 12 years, followed by more than 30 years devoted to championing his vision and standards as the Disney empire grew.

The story covers Disney’s highlights, including the 1960 Winter Olympics, 1964-1965 New York World’s Fair, and the development and opening of Disneyland, Walt Disney World, Epcot, Tokyo Disneyland and Disneyland Paris. Unlike other Disney books, this story is told from the perspective of operations rather than Imagineering. It touches on decisions that defined the guest experience and Disney’s reputation for quality in areas ranging from capacity and people-moving, training, delivering a consistent “good show,” food service, and more.This first-person narrative is presented as a series of wide-ranging vignettes. Some vignettes focus on personal, character-shaping events, such as the injury that ended his collegiate football career. Other stories touch on national events, such as Nikita Khrushchev’s derailed visit to Disneyland, the decision to close the park following the assassination of John F. Kennedy, and Ronald Reagan’s assistance in expediting the visa process for cast members staffing the Epcot World Showcase. Few people have enjoyed a life so immersed in Disney magic.

These stories share that magic through the memories of one of the original doers and dreamers.

Searching for that perfect gift for the #1 Disney fan in your life? Explore more behind-the-scenes stories from
Disney Editions:
One Little Spark! Mickey's Ten Commandments and The
Road to Imagineering (By Disney Legend Marty Sklar)
Magic Journey: My Fantastical Walt Disney Imagineering Career (By Kevin Rafferty)
ravels with Walt Disney: A Photographic Voyage Around the World (By Jeff Kurtti)
Eat Like Walt: The Wonderful World of Disney Food (By Marcy Carriker Smothers)
Walt Disney: An American Original (By Bob Thomas)

The book, Walt's Apprentice: Keeping the Disney Dream Alive [Bulk, Wholesale, Quantity] ISBN# 9781368078047 in Hardcover by Dick Nunis may be ordered in bulk quantities. Minimum starts at 25 copies. Availability based on publisher status and quantity being ordered.
View AllClose

MSRP:
Now:
As low as
Was:
In Renaissance Florence, thirteen-year-old apprentice Arduino's dreams of being a painter are challenged after he discovers the extreme measures the Maestro Cosimo di Forlç will take in the name of...

From the author of "Catherine, Called Birdy" comes another spellbinding novel set in medieval England. The girl known only as Brat has no family, no home, and no future until she meets Jane the...

MSRP:
Now:
As low as
Was:
Set in Charles Towne, Carolina Territory in 1712, Privateer's Apprentice tells the story of thirteen-year old Jameson Cooper, son of a printer, who has been thrown in jail after the death of both of...

MSRP:
Now:
As low as
Was:
The moving memoir of one brave woman who, along with her daughters, has kept 90,000 of her fellow citizens safe, healthy, and educated for more than 20 years in Somalia. Dr. Hawa Abdi, "the Mother...

The Witch's Apprentice (Dragons in a Bag)

MSRP:
Now:
As low as
Was:
The dragons may be out of the bag, but Jaxon is ready to hatch some magic of his own in this third book in the critically acclaimed series. Ever since the baby dragons were returned to the magical...

MSRP:
Now:
As low as
Was:
Customer Experience expert Jim Tincher provides the wisdom and tools to show business-to-business (B2B) organizations how to build and sustain superior customer experience (CX) as a core business...

Disability Friendly: How to Move from Clueless to Inclusive

MSRP:
Now:
As low as
Was:
Create a true culture of inclusion Although progress has been made around equality for many marginalized groups, people with disabilities are still massively underrepresented in organizations’...

MSRP:
Now:
As low as
Was:
No one has set foot on Earth in centuries -- until now." Ever since a devastating nuclear war, humanity has lived on spaceships far above Earth's radioactive surface. Now, one hundred juvenile...

MSRP:
Now:
As low as
Was:
Patricia Polacco's bestselling book - with over 400,000 copies sold - Thank You, Mr. Falker celebrates what a good teacher can be. And now her heartwarming tribute to the teacher who changed her life...

Reset: A Leader's Guide to Work in an Age of Upheaval

MSRP:
Now:
As low as
Was:
From the CEO and President of the Society for Human Resource Management (SHRM) comes the ultimate book on transforming the way we select, retain and train our employees in a radically changed...

MSRP:
Now:
As low as
Was:
Harden the human firewall against the most current threats Social Engineering: The Science of Human Hacking reveals the craftier side of the hacker’s repertoire—why hack into something when you could...

Twelve and a Half: Leveraging the Emotional Ingredients Necessary for Business Success

MSRP:
Now:
As low as
Was:
In his sixth business book, bestselling author, entrepreneur, and investor Gary Vaynerchuk explores the twelve essential emotional skills that are integral to his life—and business—success and...

Getting Along: How to Work with Anyone (Even Difficult People)

MSRP:
Now:
As low as
Was:
Work relationships can be hard. The stress of dealing with difficult people dampens our creativity and productivity, degrades our ability to think clearly and make sound decisions, and causes us to...

The Gift of Influence: Creating Life-Changing and Lasting Impact in Your Everyday Interactions

MSRP:
Now:
As low as
Was:
Researchers estimate that the average person will influence up to eighty thousand people over the course of their lifetime—or 2.8 people daily. That’s a stadium full of people each of us affects in...