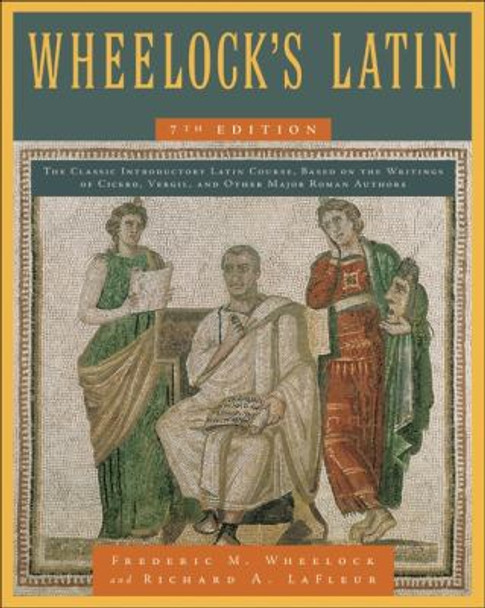 For nearly sixty years, Wheelock's Latin has remained the optimus liber of beginning Latin textbooks. When Professor Frederic M. Wheelock's Latin first appeared in 1956, the reviews extolled its thoroughness, organization, and conciseness; one reviewer predicted that the book "might well become the standard text" for introducing students to elementary Latin. Now, nearly six decades later, that prediction has certainly proved accurate. This new edition of Wheelock's Latin has all of the features, many of them improved and expanded, that have made it the bestselling single-volume beginning Latin textbook: 40 chapters with grammatical explanations and readings drawn from the works of Rome's major prose and verse writers; Self-tutorial exercises, each with an answer key, for independent study; An extensive English–Latin/Latin–English vocabulary section; A rich selection of original Latin readings—unlike other Latin textbooks, which contain primarily made-up texts; Etymological aids, maps, and dozens of images illustrating aspects of the classical culture and mythology presented in the chapter readings. Also included are expanded notes on the literary passages, comments on vocabulary, and translation tips; new comprehension and discussion questions; and new authentic classical Latin readings, including Roman graffiti, in every chapter.

The book, Wheelock's Latin [Bulk, Wholesale, Quantity] ISBN# 9780061997228 in Paperback by LaFleur, Richard A. may be ordered in bulk quantities. Minimum starts at 25 copies. Availability based on publisher status and quantity being ordered.
View AllClose

MSRP:
Now:
As low as
Was:
For nearly sixty years, Wheelock's Latin has remained the opitmus liber of beginning Latin textbooks. When Professor Frederic M. Wheelock's Latin first appeared in 1956, the reviews extolled its...

MSRP:
Now:
As low as
Was:
In The Vintage Book of Latin American Stories, Julio Ortega and Carlos Fuentes present the most compelling short fiction from Mexico to Chile. Surreal, poetic, naturalistic, urbane, peasant-born: All...

MSRP:
Now:
As low as
Was:
A comprehensive introduction to Latin forms and syntax, designed to train the student in reading ancient texts at an early stage. The book, Latin: An Intensive Course [Bulk, Wholesale, Quantity]...

MSRP:
Now:
As low as
Was:
With unique features for maximum clarity and convenience, this newly expanded edition of a respected classic offers students, teachers, and scholars alike an updated reference to the Latin language--...

MSRP:
Now:
As low as
Was:
Originally intended by Professor Frederic M. Wheelock as a sequel to Wheelock's Latin, his classic introductory Latin textbook, Wheelock's Latin Reader, newly revised and updated by Richard A...

MSRP:
Now:
As low as
Was:
Ideal for children aged 3 and up Fun rhymes to read and listen to More than 30 stickersThe book, I Love Trucks ISBN 9780312499617 in Paperback by Rigg, Jo;Mugford, Simon;Priddy, Roger may be ordered...

MSRP:
Now:
As low as
Was:
A surprisingly simple approach to help everyday people become everyday innovators. The pressure to generate big ideas can feel overwhelming. We know that bold innovations are critical in these...

MSRP:
Now:
As low as
Was:
Dog Man and Petey face their biggest challenges yet in the tenth Dog Man book from worldwide bestselling author and illustrator Dav Pilkey. Dog Man is down on his luck, Petey confronts his not so...

Flex: The Art and Science of Leadership in a Changing World [Paperback]

MSRP:
Now:
As low as
Was:
From one of the world's preeminent leadership coaches, an insightful, indispensable guide to effective leadership. For the first time, leadership expert Jeffrey Hull shares the secrets, strategies,...

MSRP:
Now:
As low as
Was:
Based on the famous ballet,The Nutcracker book will delight readers with its beautiful illustrations and simple narrative. This abridged version is a great introduction to the classic ballet and...

Working Backwards: Insights, Stories, and Secrets from Inside Amazon [Hardcover]

MSRP:
Now:
As low as
Was:
Working Backwards is an insider's breakdown of Amazon's approach to culture, leadership, and best practices from two long-time, top-level Amazon executives. Colin started at Amazon in 1998; Bill...

Under the Never Sky [Paperback]

MSRP:
Now:
As low as
Was:
He’s larger-than-life, controversial, a dealmaker and a brawler, a hero, villain and star. Everybody has a different opinion of Donald Trump, but one thing can’t be denied: He’s one of a kind, and...

The Culture Code: The Secrets of Highly Successful Groups

MSRP:
Now:
As low as
Was:
**A 2018 OWL AWARD WINNER IN THE BUSINESS CATEGORY**From the New York Times bestselling author of The Talent Code comes a book that unlocks the secrets of highly successful groups and provides...