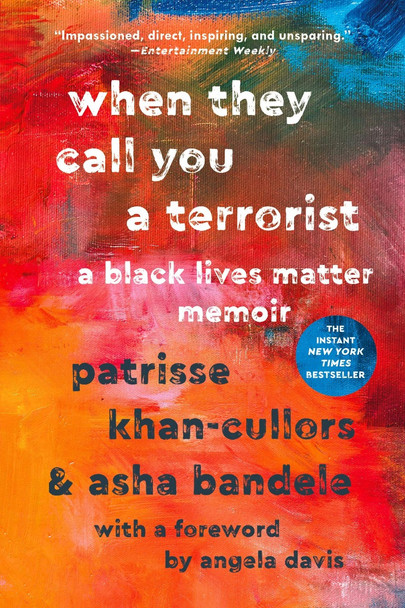 "This remarkable book reveals what inspired Patrisse's visionary and courageous activism and forces us to face the consequence of the choices our nation made when we criminalized a generation. This book is a must-read for all of us." - Michelle Alexander, New York Times bestselling author of The New Jim Crow

A poetic and powerful memoir about what it means to be a Black woman in America―and the co-founding of a movement that demands justice for all in the land of the free.

Raised by a single mother in an impoverished neighborhood in Los Angeles, Patrisse Khan-Cullors experienced firsthand the prejudice and persecution Black Americans endure at the hands of law enforcement. For Patrisse, the most vulnerable people in the country are Black people. Deliberately and ruthlessly targeted by a criminal justice system serving a white privilege agenda, Black people are subjected to unjustifiable racial profiling and police brutality. In 2013, when Trayvon Martin’s killer went free, Patrisse’s outrage led her to co-found Black Lives Matter with Alicia Garza and Opal Tometi.

Condemned as terrorists and as a threat to America, these loving women founded a hashtag that birthed the movement to demand accountability from the authorities who continually turn a blind eye to the injustices inflicted upon people of Black and Brown skin.

Championing human rights in the face of violent racism, Patrisse is a survivor. She transformed her personal pain into political power, giving voice to a people suffering inequality and a movement fueled by her strength and love to tell the country―and the world―that Black Lives Matter.

When They Call You a Terrorist is Patrisse Khan-Cullors and asha bandele’s reflection on humanity. It is an empowering account of survival, strength and resilience and a call to action to change the culture that declares innocent Black life expendable.

The book, When They Call You a Terrorist: A Black Lives Matter Memoir [Bulk, Wholesale, Quantity] ISBN# 9781250306906 in Paperback by Patrisse Khan-Cullors;asha bandele may be ordered in bulk quantities. Minimum starts at 25 copies. Availability based on publisher status and quantity being ordered.

Call Me American: A Memoir

MSRP:
Now:
As low as
Was:
The incredible true story of a boy living in war-torn Somalia who escapes to America--first by way of the movies; years later, through a miraculous green card. Abdi Nor Iftin first fell in love with...

Follow Me: A Call to Die. a Call to Live

MSRP:
Now:
As low as
Was:
David Platt, author of the New York Timesbestselling book Radical: Taking Back Your Faith from the American Dream,wants to know :"What did Jesus reallymean when He said, 'Follow me'?"For many...

MSRP:
Now:
As low as
Was:
A New York Times bestseller! They All Saw a Cat meets The Important Book in this sensitive and impactful picture book about seeing the world from different points of view by Caldecott and Coretta...

The Matter of Black Lives: Writing from the New Yorker

MSRP:
Now:
As low as
Was:
A collection of The New Yorker‘s groundbreaking writing on race in America—including work by James Baldwin, Toni Morrison, Ta-Nehisi Coates, Hilton Als, Zadie Smith, and more—with a foreword by...

MSRP:
Now:
As low as
Was:
New and Noteworthy —New York Times Book Review Must-Read Book of March —Entertainment Weekly Best Books of March —HelloGiggles “Leaps at the throat of television history and takes down the...

Roadmap to a Brighter Future: Reimagining and Realizing America's Possibilities

MSRP:
Now:
As low as
Was:
America's best days should still lie ahead. Here’s the realistic and definitive path to get us there. The future doesn’t just happen. It’s a choice that we can and must help determine. But as our...

Controlling Women: What We Must Do Now to Save Reproductive Freedom

Is This Anything? [Paperback]

MSRP:
Now:
As low as
Was:
The first book in twenty-five years from “one of our great comic minds” (The Washington Post) features Seinfeld’s best work across five decades in comedy. Since his first performance at the...

MSRP:
Now:
As low as
Was:
NOW A NATIONAL BESTSELLER “This man is a gift from God to the world. This book is a gift from Al Sharpton to us. Let’s appreciate them both.”—Michael Eric Dyson Beginning with a foreword by...

National Geographic Ultimate Visual History of the World: The Story of Humankind from Prehistory to Modern Times

MSRP:
Now:
As low as
Was:
Follow the fascinating threads of human history in this monumental volume, amply illustrated with maps, archival imagery, and revealing photographs. History comes to life in this comprehensive...