White Rage: The Unspoken Truth of Our Racial Divide [Paperback] 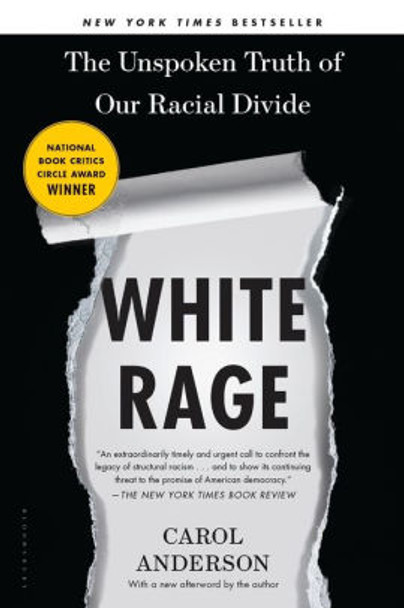 White Rage: The Unspoken Truth of Our Racial Divide [Paperback]

From the Civil War to our combustible present, acclaimed historian Carol Anderson reframes our continuing conversation about race, chronicling the powerful forces opposed to black progress in America. As Ferguson, Missouri, erupted in August 2014, and media commentators across the ideological spectrum referred to the angry response of African Americans as “black rage,” historian Carol Anderson wrote a remarkable op-ed in The Washington Post suggesting that this was, instead, "white rage at work. With so much attention on the flames," she argued, "everyone had ignored the kindling." Since 1865 and the passage of the Thirteenth Amendment, every time African Americans have made advances towards full participation in our democracy, white reaction has fueled a deliberate and relentless rollback of their gains. The end of the Civil War and Reconstruction was greeted with the Black Codes and Jim Crow; the Supreme Court's landmark 1954 Brown v. Board of Education decision was met with the shutting down of public schools throughout the South while taxpayer dollars financed segregated white private schools; the Civil Rights Act of 1964 and Voting Rights Act of 1965 triggered a coded but powerful response, the so-called Southern Strategy and the War on Drugs that disenfranchised millions of African Americans while propelling presidents Nixon and Reagan into the White House, and then the election of America's first black President, led to the expression of white rage that has been as relentless as it has been brutal. Carefully linking these and other historical flashpoints when social progress for African Americans was countered by deliberate and cleverly crafted opposition, Anderson pulls back the veil that has long covered actions made in the name of protecting democracy, fiscal responsibility, or protection against fraud, rendering visible the long lineage of white rage. Compelling and dramatic in the unimpeachable history it relates, White Rage will add an important new dimension to the national conversation about race in America.

The book, White Rage: The Unspoken Truth of Our Racial Divide [Bulk, Wholesale, Quantity] ISBN# 9781632864130 in Paperback by Carol Anderson may be ordered in bulk quantities. Minimum starts at 25 copies. Availability based on publisher status and quantity being ordered.
View AllClose

White Rage: The Unspoken Truth of Our Racial Divide

MSRP:
Now:
As low as
Was:
Structural racism has impacted the lives of African Americans in the United States since before the country’s founding. Although the country has made some progress towards a more equal society,...

MSRP:
Now:
As low as
Was:
Canada's relationship with its Indigenous people has suffered as a result of both the residential school system and the lack of understanding of the historical and current impact of those schools...

MSRP:
Now:
As low as
Was:
A sweeping examination of how American racism has broken the country's social compact, eroded America's common goods, and damaged the lives of every American and a heartfelt look at how these deep...

The End of White Politics: How to Heal Our Liberal Divide

MSRP:
Now:
As low as
Was:
In the entire history of the United States of America: We've never elected a woman as our president. We've only had one president who is not a white man. With two presidential campaigns under her...

MSRP:
Now:
As low as
Was:
"I remember the day I lost my spirit." So begins the story of Gertrude Simmons, also known as Zitkala-Ša, which means Red Bird. Born in 1876 on the Yankton Sioux reservation in South Dakota,...

Let's Taco about How Great You Are

MSRP:
Now:
As low as
Was:
A pun-filled, fun-filled food-filled gift book celebrating YOU! Ideal for graduation or any time a kid is celebrated. Hey, kid, let's TACO about how great you are. DONUT how you do it. You always...

How to Start a Revolution: Young People and the Future of American Politics [Hardcover]

MSRP:
Now:
As low as
Was:
Teen Vogue award-winning columnist Lauren Duca shares a smart and funny guide for challenging the status quo in a much-needed reminder that young people are the ones who will change the world. A...

MSRP:
Now:
As low as
Was:
How any organization in any industry can progress from old-fashioned management by results to a strikingly different and better way." --James P. Womack, Chairman and Founder, Lean Enterprise...

MSRP:
Now:
As low as
Was:
Say goodnight on the farm with this sweet board book for babies and toddlers! It's barnyard bedtime, and all the farm animals need to go to sleep. But, oh no! The cows are in the pig's pen, the...

MSRP:
Now:
As low as
Was:
Take a tour around the world to meet all kinds of bears in this delightful pre-reader. Kids love bears and in this book they'll be introduced to them all: Grizzly, polar, sun, sloth, black, and...

Bending Reality: How to Make the Impossible Probable

MSRP:
Now:
As low as
Was:
Bending Reality is the innovative process used by billionaires, tech leaders, and the world’s most successful people to make the impossible . . . probable. Victoria Song teaches readers how to...

Lizzie Bright and the Buckminster Boy

MSRP:
Now:
As low as
Was:
A 2005 Newbery Honor Book It only takes a few hours for Turner Buckminster to start hating Phippsburg, Maine. No one in town will let him forget that he's a minister's son, even if he doesn't act...