Wisdom Rising: Journey into the Mandala of the Empowered Feminine 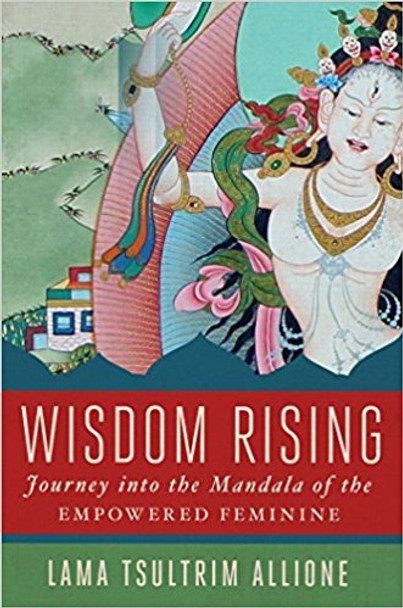 Wisdom Rising: Journey into the Mandala of the Empowered Feminine

Through her own story of loss and spiritual seeking, paired with mandala meditations and rituals, bestselling author of Feeding Your Demons Lama Tsultrium Allione teaches you how to embody the enlightened, fierce power of the sacred feminine—the tantric dakinis. Ordained as one of the first American Buddhist nuns and recognized as an incarnation of the Mother of Tibetan Buddhism, Lama Tsultrim has a unique perspective on female strength and enlightenment. In Wisdom Rising, she shares from a deep trove of personal experiences as well as decades of knowledge as one of the preeminent teachers of the mandala of the five dakinis. Dakinis are a type of Buddhist female spirit comprised of five families, each with a set of unique qualities, as well as an encumbered pattern or emotional block that gets in the way of your true brilliance: Buddha dakini—ignorance to the all-encompassing wisdom; Vajra dakini—anger to the mirror-like wisdom; Ratna dakini—pride to the wisdom of equanimity; Padma dakini—craving to the wisdom of discernment; Karma dakini—envy to the all-accomplishing wisdom. As a Buddhist nun, Lama Tsultrim yearned to become a mother, ultimately renouncing her vows so she could marry and have a child. When she subsequently lost her first child to SIDS, she was overcome with grief and unsure of where to turn for guidance. She once against found courage through Buddhist female role models and meditations, and, using the mandala of the dakinis, she transformed her pain into faith. Tantric Buddhism developed the mandala as a mediational tool for transformation—a map for integration and wholeness. And through the mandala of the five dakinis, we learn how to embrace the fierce feminine energy of the dakinis. Rather than trying to remove or repress their patterns in our lives, you will instead discover how to transform them into wisdom through meditation, sound, visualization, and other practices. Both practical and inspiring, Wisdom Rising guides you to explore an ancient yet accessible path to enlightenment.

The book, Wisdom Rising: Journey into the Mandala of the Empowered Feminine [Bulk, Wholesale, Quantity] ISBN# 9781501115035 in Hardcover by Lama Tsultrim Allione may be ordered in bulk quantities. Minimum starts at 25 copies. Availability based on publisher status and quantity being ordered.
View AllClose

The Dark Is Rising

MSRP:
Now:
As low as
Was:
WHEN THE DARK COMES RISING, SIX SHALL TURN THEM BACK...." When Will Stanton wakes up on the morning of his birthday, he discovers anunbelievable gift -- he is immortal. Bemused and terrified, he...

MSRP:
Now:
As low as
Was:
An astonishing collection of poems and essays written by young contemporary Native Americans. Words of protest against prejudice and oppression, poems of estrangement and pain, cries for lost worlds...

Rising to the Challenge: My Leadership Journey

MSRP:
Now:
As low as
Was:
Pulling my radiation mask out of my pocket, my rough hands snagged the fine gauze. How could such a thin weave protect me from death? You can't see radiation, or smell it, or feel it. Could a mask...

China Road: A Journey into the Future of a Rising Power [Paperback]

MSRP:
Now:
As low as
Was:
Route 312 is the Chinese Route 66. It flows three thousand miles from east to west, passing through the factory towns of the coastal areas, through the rural heart of China, then up into the Gobi...

Cracking the Code of Service: How to Elevate Your Employees and Customers Through World Class Service

MSRP:
Now:
As low as
Was:
Mark Colgate, drawing from more than twenty years of experience teaching customer service courses, enlightens us that the age-old moniker, “customer is king,” is actually incorrect. Colgate stresses...

MSRP:
Now:
As low as
Was:
What's it like to have a wiggly, twisty-turny tooth inside your mouth? Stephen Krensky's funny, kid-friendly, rhyming text answers this question and more! "Do lions have this problem, too? What do...

From the author of "Catherine, Called Birdy" comes another spellbinding novel set in medieval England. The girl known only as Brat has no family, no home, and no future until she meets Jane the...

MSRP:
Now:
As low as
Was:
The original classic touch and feel book that has been entertaining babies for over 60 years. The book, Pat the Bunny [Bulk, Wholesale, Quantity] ISBN# 9780307120007 in Paperback by Kunhardt, Dorothy...

MSRP:
Now:
As low as
Was:
A classic adventure novel centering on a ferocious and magnificent creature, half dog, half wolf, through whose experiences we feel the essential savagery of wilderness life among animals and menThe...