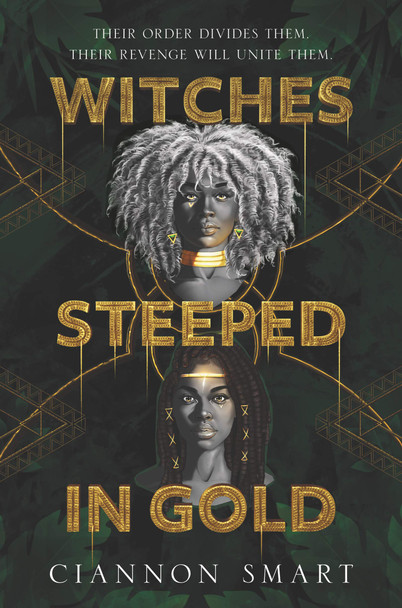 This Jamaican-inspired fantasy debut about two enemy witches who must enter into a deadly alliance to take down a common enemy has the twisted cat-and-mouse of Killing Eve with the richly imagined fantasy world of Furyborn and Ember in the Ashes.

Iraya has spent her life in a cell, but every day brings her closer to freedom—and vengeance.

Jazmyne is the Queen’s daughter, but unlike her sister before her, she has no intention of dying to strengthen her mother’s power.

Sworn enemies, these two witches enter a precarious alliance to take down a mutual threat. But power is intoxicating, revenge is a bloody pursuit, and nothing is certain—except the lengths they will go to win this game.

"A thundering waterfall of magic, vengeance and intrigue." —Samantha Shannon, New York Times & Sunday Times bestselling author of The Priory of the Orange Tree and The Bone Season.

The book, Witches Steeped in Gold [Bulk, Wholesale, Quantity] ISBN# 9780062945983 in Hardcover by Ciannon Smart may be ordered in bulk quantities. Minimum starts at 25 copies. Availability based on publisher status and quantity being ordered.
View AllClose

MSRP:
Now:
As low as
Was:
From the bestselling author of Charlie and the Chocolate Factory and The BFG! This is not a fairy tale. This is about real witches. Grandmamma loves to tell about witches. Real witches are the most...

Witches: The Absolutely True Tale of Disaster in Salem

MSRP:
Now:
As low as
Was:
In the little colonial town of Salem Village, Massachusetts, young girls began to twitch, speak wild and garbled words, and contort their bodies into strange shapes. Bewitched! cried the Puritans...

MSRP:
Now:
As low as
Was:
**A 2019 OWL AWARD SHORTLIST WINNER IN THE POLITICS & CURRENT EVENTS CATEGORY**THIS IS A WITCH HUNT. WE'RE WITCHES, AND WE'RE HUNTING YOU. From the moment powerful men started falling to the...

MSRP:
Now:
As low as
Was:
Lady Mary is a ward of Lord and Lady Macbeth whose life is forever changed when her father, Lord Cawdor, betrays the Scottish king -- and is hanged as a traitor. In an instant, Mary has lost both her...

The Witches: A Set of Plays

MSRP:
Now:
As low as
Was:
Roald Dahl fans will rejoice at the opportunity to bring their favorite books and characters to life. Five of Dahl's hugely popular, beloved books have been adapted into winning plays for children...

MSRP:
Now:
As low as
Was:
New Edition! 2016 copyright. This mass market paperback offers a concise guide to the essential language of medicine with 38,000 entries and more than 500 new words and senses. New words include:...

MSRP:
Now:
As low as
Was:
A raging wildfire can be a major disaster, costing lives and destroying homes. But fires in nature can help as well as harm, clearing forests of dead trees and allowing young plants to grow...

Does a Kangaroo Have a Mother, Too? [Hardcover]

MSRP:
Now:
As low as
Was:
Do animals have mothers, too? Of course they do -- just like me and you! Meet the little joey, whose kangaroo mother carries him in her pouch. See the cygnet riding on the back of the mother swan...

MSRP:
Now:
As low as
Was:
As a standard book for many elementary school classroom curriculums, Touching Spirit Bear resembles other popular education titles like Holes and Hatchet. It’s strong themes of survival, family and...

The Woman's Hour: The Great Fight to Win the Vote [Hardcover]

MSRP:
Now:
As low as
Was:
The nail-biting climax of one of the greatest political battles in American history: the ratification of the constitutional amendment that granted women the right to vote. "Anyone interested in the...

MSRP:
Now:
As low as
Was:
Theology is for everyone.Everyone is a theologian of sorts. Theology simply means thinking about God and expressing those thoughts in some way. But sloppy theology is a problem. As Christians, our...

The Best Seat in Second Grade

MSRP:
Now:
As low as
Was:
Sam is tired of waiting to be Hamster Helper. So when his class takes a trip to the science museum, Sam decides to bring along something extra . . The Best Seat in Second Grade ISBN 9780060007362 in...

MSRP:
Now:
As low as
Was:
It’s the series that could! Built for the way babies read, INDESTRUCTIBLES are now selling 400,000 copies a year, and the series has over 3 million copies in print. Sweet, soothing books, uniquely...

The New Genius Formula: Yes, You Can Boost Your IQ!

MSRP:
Now:
As low as
Was:
"THE SCIENCE OF SMART" covers the range of intelligences that make us successful, from verbal and spatial to social and emotional and, through a series of exercises and how-to’s, you'll dive deep...

The Book of Common Prayer

MSRP:
Now:
As low as
Was:
The Book of Common Prayer is the old and well-loved prayer book of the Church of England, in use since the 16th century. In this revised 1662 form, it has also become one of the classic English...