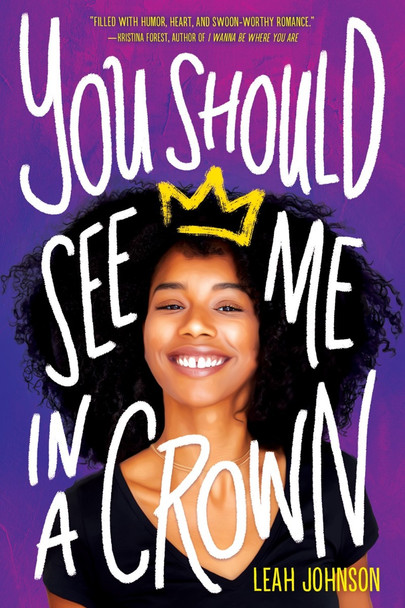 Liz Lighty has always believed she's too black, too poor, too awkward to shine in her small, rich, prom-obsessed midwestern town. But it's okay -- Liz has a plan that will get her out of Campbell, Indiana, forever: attend the uber-elite Pennington College, play in their world-famous orchestra, and become a doctor.

But when the financial aid she was counting on unexpectedly falls through, Liz's plans come crashing down . . . until she's reminded of her school's scholarship for prom king and queen. There's nothing Liz wants to do less than endure a gauntlet of social media trolls, catty competitors, and humiliating public events, but despite her devastating fear of the spotlight she's willing to do whatever it takes to get to Pennington.

The only thing that makes it halfway bearable is the new girl in school, Mack. She's smart, funny, and just as much of an outsider as Liz. But Mack is also in the running for queen. Will falling for the competition keep Liz from her dreams . . . or make them come true?

The book, You Should See Me in a Crown [Bulk, Wholesale, Quantity] ISBN# 9781338503265 in Hardcover by Leah Johnson may be ordered in bulk quantities. Minimum starts at 25 copies. Availability based on publisher status and quantity being ordered.
View AllClose

Misty Copeland (You Should Meet)

MSRP:
Now:
As low as
Was:
Pirouette across the stage and get to know Misty Copeland—the first African-American woman to become a principal ballerina with the American Ballet Theater—in this fascinating, nonfiction Level 3...

MSRP:
Now:
As low as
Was:
An easy, elegant, and pocket-sized gift book packed with everything a bride needs to plan her dream wedding. This petite handbook is a personal wedding planner you can carry in your pocket! The...

Kids Who Are Saving the Planet (You Should Meet)

MSRP:
Now:
As low as
Was:
Meet the environmentally-minded kids who are coming up with ways to save the planet in this fascinating nonfiction Level 3 Ready-to-Read, part of a series of biographies about people “you should...

Why You Should Be a Socialist

MSRP:
Now:
As low as
Was:
A primer on Democratic Socialism for those who are extremely skeptical of it. America is witnessing the rise of a new generation of socialist activists. More young people support socialism now than...

Jesse Owens (You Should Meet)

MSRP:
Now:
As low as
Was:
Sprint around the track and get to know Jesse Owens in this fascinating, nonfiction Level 3 Ready-to-Read, part of a new series of biographies about people “you should meet.” Meet Jesse Owens, an...

A World Without Email: Reimagining Work in an Age of Communication Overload

MSRP:
Now:
As low as
Was:
From New York Times bestselling author Cal Newport comes a bold vision for liberating workers from the tyranny of the inbox--and unleashing a new era of productivity. Modern knowledge workers...

MSRP:
Now:
As low as
Was:
Using a wide variety of stunning photographs, author Kevin Kurtz poses thought-provoking questions to help readers determine if things are living or nonliving. For example, if most (but not all)...

David and Goliath: Underdogs, Misfits, and the Art of Battling Giants [Paperback]

MSRP:
Now:
As low as
Was:
Malcolm Gladwell's provocative new #1 bestseller -- now in paperback. Three thousand years ago on a battlefield in ancient Palestine, a shepherd boy felled a mighty warrior with nothing more than a...

Crystals: A Guide to Using the Crystal Compass for Energy, Healing, and Reclaiming Your Power [Hardcover]

MSRP:
Now:
As low as
Was:
The ultimate guide to using crystals for healing, wellbeing, and creating harmony Crystals are teachers. They conduct and transform our energy to help us to discover our true selves and attain our...