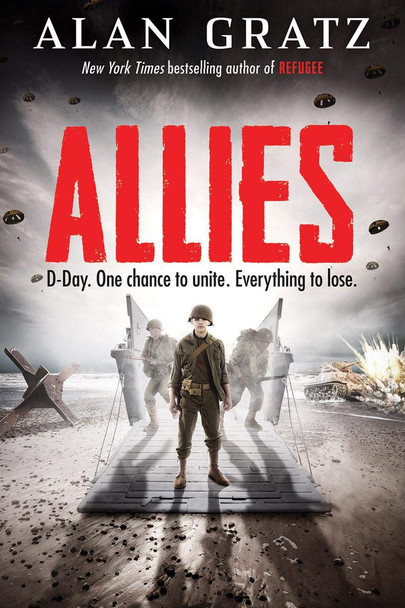 **A 2019 OWL AWARD SHORTLIST WINNER IN THE ELEMENTARY CATEGORY**

Alan Gratz, bestselling author of Refugee, weaves a stunning array of voices and stories into an epic tale of teamwork in the face of tyranny -- and how just one day can change the world.

June 6, 1944: The Nazis are terrorizing Europe, on their evil quest to conquer the world. The only way to stop them? The biggest, most top-secret operation ever, with the Allied nations coming together to storm German-occupied France.

Dee, a young U.S. soldier, is on a boat racing toward the French coast. And Dee -- along with his brothers-in-arms -- is terrified. He feels the weight of World War II on his shoulders.

But Dee is not alone. Behind enemy lines in France, a girl named Samira works as a spy, trying to sabotage the German army. Meanwhile, paratrooper James leaps from his plane to join a daring midnight raid. And in the thick of battle, Henry, a medic, searches for lives to save.

In a breathtaking race against time, they all must fight to complete their high-stakes missions. But with betrayals and deadly risks at every turn, can the Allies do what it takes to win?

The book, Allies [Bulk, Wholesale, Quantity] ISBN# 9781338245721 in Hardcover by Alan Gratz may be ordered in bulk quantities. Minimum starts at 25 copies. Availability based on publisher status and quantity being ordered.

Cannabis and Spirituality: An Explorer?s Guide to an Ancient Plant Spirit Ally

MSRP:
Now:
As low as
Was:
A guide to the benefits and challenges of the use of cannabis in spiritual practice • Includes chapters by 18 authoritative and influential voices of the modern cannabis movement, including Kathleen...

Dear Ally, How Do You Write a Book?

MSRP:
Now:
As low as
Was:
Have you always wanted to write a book, but don't know where to start? Or maybe you're really great at writing the first few chapters . . . but you never quite make it to the end? Or do you finally...

Good Guys: How Men Can Be Better Allies for Women in the Workplace

MSRP:
Now:
As low as
Was:
**A 2020 OWL AWARD LONGLIST WINNER IN THE WOMEN IN BUSINESS CATEGORY**What's missing from gender equality efforts? Men. Women are at a disadvantage in the workplace, where they deal with unequal pay,

Allies and Advocates: Creating an Inclusive and Equitable Culture

MSRP:
Now:
As low as
Was:
Allies and Advocates: Creating an Inclusive and Equitable Culture is about inclusion in everyday business life. Inclusion and diversity are topics that touch everything we do. For us to move away...

MSRP:
Now:
As low as
Was:
Are you looking to build a workplace culture with a certain buzz about it? Where employees are thriving and engagement survey scores are through the roof. Where people from different backgrounds,...

The Rock from the Sky

MSRP:
Now:
As low as
Was:
Look up! From the Caldecott Medal–winning creator of the Hat Trilogy comes a new deadpan gem. There is a spot. It is a good spot. It is the perfect spot to stand. There is no reason to ever...

MSRP:
Now:
As low as
Was:
Sophie is an artist who wants to spin beautiful creations all day long and, someday, a masterpiece. As a spider, though, Sophie has a hard time finding a welcoming place in which she can be free to...

MSRP:
Now:
As low as
Was:
The three-time Caldecott medalist tells the tale of two ants who decide to leave the safety of the others to venture into a danger-laden kitchenThe book, Two Bad Ants ISBN 9780395486689 in Hardcover...