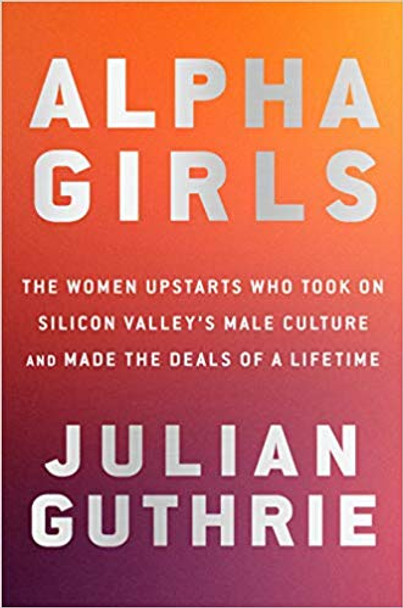 An unforgettable story of four women who, through grit and ingenuity, became stars in the cutthroat, high-stakes, male dominated world of venture capital in Silicon Valley, and helped build some of the foremost companies of our time.

In Alpha Girls, award-winning journalist Julian Guthrie takes readers behind the closed doors of venture capital, an industry that transforms economies and shapes how we live. We follow the lives and careers of four women who were largely written out of history - until now.

Magdalena Yesil, who arrived in America from Turkey with $43 to her name, would go on to receive her electrical engineering degree from Stanford, found some of the first companies to commercialize internet access, and help Marc Benioff build Salesforce. Mary Jane Elmore went from the corn fields of Indiana to Stanford and on to the storied venture capital firm IVP - where she was one of the first women in the U.S. to make partner - only to be pulled back from the glass ceiling by expectations at home. Theresia Gouw, an overachieving first-generation Asian American from a working-class town, dominated the foosball tables at Brown (she would later reluctantly let Sergey Brin win to help Accel Partners court Google), before she helped land and build companies including Facebook, Trulia, Imperva, and ForeScout. Sonja Hoel, a Southerner who became the first woman investing partner at white-glove Menlo Ventures, invested in McAfee, Hotmail, Acme Packet, and F5 Networks. As her star was still rising at Menlo, a personal crisis would turn her into an activist overnight, inspiring her to found an all-women's investment group and a national nonprofit for girls.

These women, juggling work and family, shaped the tech landscape we know today while overcoming unequal pay, actual punches, betrayals, and the sexist attitudes prevalent in Silicon Valley and in male-dominated industries everywhere. Despite the setbacks, they would rise again to rewrite the rules for an industry they love. In Alpha Girls, Guthrie reveals their untold stories.

The book, Alpha Girls: The Women Upstarts Who Took on Silicon Valley's Male Culture and Made the Deals of a Lifetime [Bulk, Wholesale, Quantity] ISBN# 9780525573920 in Hardcover by Julian Guthrie may be ordered in bulk quantities. Minimum starts at 25 copies. Availability based on publisher status and quantity being ordered.
View AllClose

Bad Girls Throughout History: 100 Remarkable Women Who Changed the World

Herstory: 50 Women and Girls Who Shook Up the World

MSRP:
Now:
As low as
Was:
Move aside history—it’s time for herstory. Celebrate fifty inspiring and powerful women who changed the world and left their mark in this lavishly illustrated biography compilation that’s perfect for...

The Girl Who Rode a Shark: And Other Stories of Daring Women

MSRP:
Now:
As low as
Was:
Now more than ever, the world is recognizing how strong women and girls are. How strong? In the early 1920s, Inuit expeditioner Ada Blackjack survived for two years as a castaway on an uninhabited...

The League of Wives: The Untold Story of the Women Who Took on the U.S. Government to Bring Their Husbands Home [Paperback]

MSRP:
Now:
As low as
Was:
The true story of the fierce band of women who battled Washington―and Hanoi―to bring their husbands home from the jungles of Vietnam. On February 12, 1973, one hundred and sixteen men who, just six...

MSRP:
Now:
As low as
Was:
Three of the most beloved Disney Princess movies—Snow White, Sleeping Beauty, and Cinderella—are retold in this magical hardcover Little Golden Book collection. Princess fans of all ages will...

Becoming Super Woman: A Simple 12-Step Plan to Go from Burnout to Balance

MSRP:
Now:
As low as
Was:
**A 2019 OWL AWARD LONGLIST WINNER IN THE WOMEN IN BUSINESS CATEGORY**Is working like crazy driving you crazy? Do you feel daily pressure to keep pushing yourself even when you’re stressed and...

MSRP:
Now:
As low as
Was:
A Little Book About Feelings is a beautiful English / Spanish bilingual picture book with enchanting images and an empowering message about expressing emotions. The book sweetly teaches young...

Not for Tourists Guide to Los Angeles 2022

MSRP:
Now:
As low as
Was:
With details on everything from the Hollywood Bowl to the Sunset Strip, this is the only guide a native or traveler needs. The Not For Tourists Guide to Los Angeles is the essential urban handbook...

MSRP:
Now:
As low as
Was:
Now in a second edition, this classic book shows how to make conversations generative and productive rather than critical and destructive so people, organizations, and communities flourish. We...

MSRP:
Now:
As low as
Was:
Mrs. Jeepers may -- or may not -- be a vampire in this funny and spooky series from Graphix Chapters. The third graders at Bailey Elementary are so hard to handle that all of their teachers have...

Normal Sucks: How to Live, Learn, and Thrive, Outside the Lines

MSRP:
Now:
As low as
Was:
Confessional and often hilarious, in Normal Sucks a neuro-diverse writer, advocate, and father offers a radical message of acceptance and empowerment. Jonathan Mooney blends anecdote, expertise,...