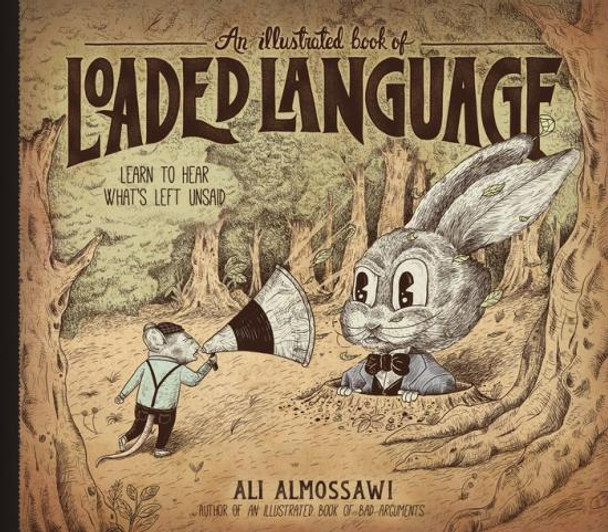 MSRP:
Now: List Price $16.95
Was:
— You save
Hardcover
This product qualifies for FREE US Ground Shipping on orders over $100.

The creators of An Illustrated Book of Bad Arguments return at last with a desperately timely guide to rhetoric.

Public discourse? More like public discord. The battle cries of our culture wars are rife with “loaded language”—be it bias, slant, or spin. But listen closely, or you’ll miss what Ali Almossawi finds more frightening still: words that erase accountability, history, even identity through what they leave unsaid.

Speaking as wise old Mr. Rabbit, Almossawi leads us through a dark forest of rhetoric—aided by Orwell, Baldwin, and a squee-worthy cast of wide-eyed woodland creatures. Here, passive voice can pardon wrongdoers, statistics may be a smokescreen, gaslighting entraps the downtrodden, and irrelevant adjectives cement stereotypes. Emperor Squirrel isn’t naked; he has a clothes-free sartorial style. Mouse’s roof becomes flattened (Elephant’s foot just happens to be there at the time). And when keen-eyed Owl claims a foreign shore, he seems to be overlooking someone . . .

Fans of Almossawi’s An Illustrated Book of Bad Arguments couldn’t ask for a better primer on the less logical ways that words can trick us. It takes a long pair of ears to hear what’s left unsaid—but when you’re a rabbit in a badger world, listening makes all the difference.

What's Out There?: A Book about Space

MSRP:
Now:
As low as
Was:
What is the sun made of? What causes night and day? Why does the moon change shape? Colorful collage illustrations and an easy-to-understand text bring planets, stars, comets, and the wondrous things...

What's Left of Me Is Yours

MSRP:
Now:
As low as
Was:
A gripping debut set in modern-day Tokyo and inspired by a true crime, for readers of Everything I Never Told You and The Perfect Nanny, What's Left of Me Is Yours charts a young woman's search for...

MSRP:
Now:
As low as
Was:
This grace-filled prayer book invites people who are incarcerated to spend time in prayer, trusting in God's never-failing love for them and the whole world. Others who accompany and care for them,...

MSRP:
Now:
As low as
Was:
So, what's it like to be a cat?" I'm very glad you asked me that. Are cats afraid of the dark? Where do they prefer to sleep? What time do cats eat their breakfast? And what do they "really" think of...

MSRP:
Now:
As low as
Was:
There’s a crisis of trust in politics across the western world. Public anger is rising and faith in conventional political leaders and parties is falling. Anti-politics, and the anti-politicians,...

MSRP:
Now:
As low as
Was:
From the New York Times bestselling author of Front Desk comes a poignant middle grade novel about courage, hope, and resilience as an Asian American boy fights to keep his family together and stand...

MSRP:
Now:
As low as
Was:
A startling and profound exploration of how Jewish history is exploited to comfort the living. Renowned and beloved as a prizewinning novelist, Dara Horn has also been publishing penetrating...

MSRP:
Now:
As low as
Was:
A landmark biography by two prizewinning Washington Post reporters that reveals how systemic racism shaped George Floyd's life and legacy—from his family’s roots in the tobacco fields of North...

MSRP:
Now:
As low as
Was:
In this sweet and adventurous picture book, an unusually literary fish leaves the safety of her bowl to explore her library home for the first time. When Mr. Hughes finds a fish all alone in the...

The End of Burnout: Why Work Drains Us and How to Build Better Lives

MSRP:
Now:
As low as
Was:
Going beyond the how and why of burnout, a former tenured professor combines academic methods and first-person experience to propose new ways for resisting our cultural obsession with work and...

Nothing to See Here [Hardcover]