Austerity: When It Works and When It Doesn't 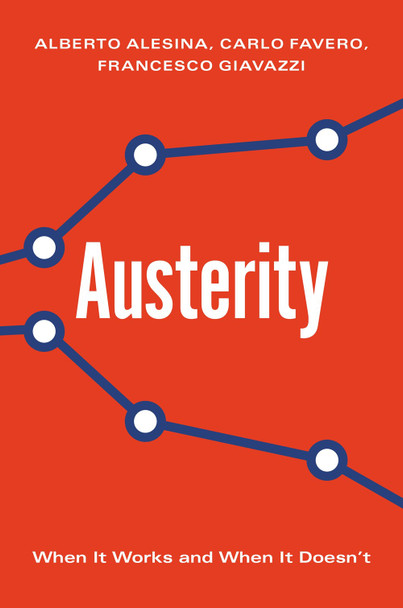 Austerity: When It Works and When It Doesn't

Fiscal austerity is hugely controversial. Opponents argue that it can trigger downward growth spirals and become self-defeating. Supporters argue that budget deficits have to be tackled aggressively at all times and at all costs. In this masterful book, three of today’s leading policy experts cut through the political noise to demonstrate that there is not one type of austerity but many.

Looking at thousands of fiscal measures adopted by sixteen advanced economies since the late 1970s, Austerity assesses the relative effectiveness of tax increases and spending cuts at reducing debt. It shows that spending cuts have much smaller costs in terms of output losses than tax increases. Spending cuts can sometimes be associated with output gains in the case of expansionary austerity and are much more successful than tax increases at reducing the growth of debt. The authors also show that austerity is not necessarily the kiss of death for political careers as is often believed, and provide new insights into the recent cases of European austerity after the financial crisis.

Bringing needed clarity to one of today’s most challenging subjects, Austerity charts a sensible approach based on data analysis rather than ideology.

The book, Austerity: When It Works and When It Doesn't [Bulk, Wholesale, Quantity] ISBN# 9780691172217 in Hardcover by Alberto Alesina;Carlo Favero;Francesco Giavazzi may be ordered in bulk quantities. Minimum starts at 25 copies. Availability based on publisher status and quantity being ordered.

Bargaining with the Devil: When to Negotiate, When to Fight [Paperback]

MSRP:
Now:
As low as
Was:
One of the country's most eminent practitioners of the art and science of negotiation offers practical advice for the most challenging conflictswhen you are facing an adversary you don't trust, who...

It Doesn't Have to Be Crazy at Work

MSRP:
Now:
As low as
Was:
In this timely manifesto, the authors of the New York Times bestseller Rework broadly reject the prevailing notion that long hours, aggressive hustle, and "whatever it takes" are required to run a...

When Your Llama Needs a Haircut (When Your...)

MSRP:
Now:
As low as
Was:
When it’s picture day and you realize your llama needs a haircut, you’ll need a good comb and some luck! This charming and hilarious board book features one shaggy llama and a whole lot of...

Snakes in Suits, Revised Edition: When Psychopaths Go to Work

MSRP:
Now:
As low as
Was:
Let's say you're about to hire somebody for a position in your company. Your corporation wants someone who's fearless, charismatic, and full of new ideas. Candidate X is charming, smart, and has all...

When You Grow Up to Vote: How Our Government Works for You

MSRP:
Now:
As low as
Was:
Eleanor Roosevelt’s book on citizenship for young people now revised and updated for a contemporary audience. In the voice of one of the most iconic and beloved political figures of the twentieth...

MSRP:
Now:
As low as
Was:
Thirty years since its original publication, Ceremony remains one of the most profound and moving works of Native American literature, a novel that is itself a ceremony of healing. Tayo, a World War...

The Glorious Qur'an: The Arabic Text with a Translation in English

MSRP:
Now:
As low as
Was:
As the first English translation of the Qur'an by a Muslim Englishman, the aim of The Glorious Qur'an is to present to English readers what Muslims the world over hold to be the meaning of the words...

Stamped: Racism, Antiracism, and You: A Remix of the National Book Award-Winning Stamped from the Beginning

MSRP:
Now:
As low as
Was:
The #1 New York Times bestseller and a USAToday bestseller! A timely, crucial, and empowering exploration of racism--and antiracism--in America This is NOT a history book. This is a book...

Two Beats Ahead: What Musical Minds Teach Us about Innovation

MSRP:
Now:
As low as
Was:
Discover what the musical mind has to teach us about innovation in this fascinating book, featuring interviews with Justin Timberlake, Pharrell Williams, T Bone Burnett, Gloria Estefan, Imogen Heap,...

MSRP:
Now:
As low as
Was:
For students in grades 6-8, ages 11-14, this new hardcover middle school dictionary covers all vocabulary students should be exposed to in their reading material. It's a great tool to help with...

Charter Schools and Their Enemies

MSRP:
Now:
As low as
Was:
A leading conservative intellectual defends charter schools against the teachers' unions, politicians, and liberal educators who threaten to dismantle their success. The black-white educational...

The Unspoken Rules: Secrets to Starting Your Career Off Right