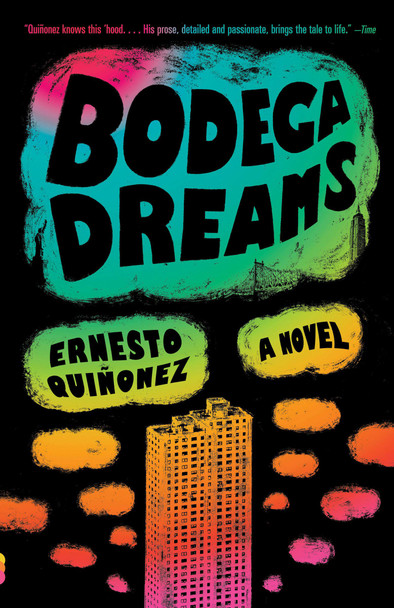 In this "thriller with literary merit" (Time Out New York), a stunning narrative combines the gritty rhythms of Junot Diaz with the noir genius of Walter Mosley.

Bodega Dreams pulls us into Spanish Harlem, where the word is out: Willie Bodega is king. Need college tuition for your daughter? Start-up funds for your fruit stand? Bodega can help. He gives everyone a leg up, in exchange only for loyalty—and a steady income from the drugs he pushes.

Lyrical, inspired, and darkly funny, this powerful debut novel brilliantly evokes the trial of Chino, a smart, promising young man to whom Bodega turns for a favor. Chino is drawn to Bodega's street-smart idealism, but soon finds himself over his head, navigating an underworld of switchblade tempers, turncoat morality, and murder.

"Bodega is a fascinating character. . . . The story [Quiñonez] tells has energy and verve." —The New York Times Book Review

The book, Bodega Dreams: A Novel [Bulk, Wholesale, Quantity] ISBN# 9780375705892 in Paperback by Ernesto Quiñonez may be ordered in bulk quantities. Minimum starts at 25 copies. Availability based on publisher status and quantity being ordered.
View AllClose

The Dictionary of Dreams: 10,000 Dreams Interpreted

MSRP:
Now:
As low as
Was:
What does it mean to dream of running, playing an accordian, catching frogs, riding a stallion, eating honey, dying; or to see an eagle, apples, a tunnel, a shoemaker, or a field of growing wheat in...

MSRP:
Now:
As low as
Was:
The lawyer turned on the tape recorder, handed his client a cigarette, and lit it for him. Black drew hard, squinting as the smoke rushed into his lungs. "Where do you want to start?"the lawyer said,...

MSRP:
Now:
As low as
Was:
Roberto is excited about the paper mouse he made in school, until Amy asks, "Does it do anything?" Roberto isn't sure, so he leaves the mouse on his window sill and goes to bed. Before long his...

This Is the Dream [Hardcover]

MSRP:
Now:
As low as
Was:
Our nation was founded on the belief that all men are created equal. Nearly two hundred years after the signing of the Declaration of Independence, slavery had been abolished but America was still...

MSRP:
Now:
As low as
Was:
A REESE WITHERSPOON x HELLO SUNSHINE BOOK CLUB YA PICK Filled with all of the action, emotion, and lyrical writing that brought readers to Sky in the Deep, New York Times bestselling author...

MSRP:
Now:
As low as
Was:
The iconic memoir by the former First Lady of the United States—now in trade paperback featuring a new introduction by Michelle Obama, a letter from the author to her younger self, and a book club...

MSRP:
Now:
As low as
Was:
Revised and Updated Edition! ©2020. Two essential language references integrated into one handy volume. More than 60,000 dictionary entries with hundreds of new words and senses added across a...

MSRP:
Now:
As low as
Was:
Can average be amazing? The bestselling author of Frindle shows that with a little kindness, it can. Jordan Johnston is average. Not short, not tall. Not plump, not slim. Not gifted, not flunking...

The Tortoise and the Hare (Timeless Fables)

MSRP:
Now:
As low as
Was:
When Tortoise says to Hare, I bet I can beat you in a running race!, everyone laughs. Tortoise puts one foot in front of the next. Hare stops to nibble carrot tops and cabbages. . . . Who will have...

MSRP:
Now:
As low as
Was:
In Never Enough, Mike Hayes―former Commander of SEAL Team TWO―helps readers apply high-stakes lessons about excellence, agility, and meaning across their personal and professional lives. Mike...

MSRP:
Now:
As low as
Was:
A National Book Award Finalist A PEN/Faulkner Award Finalist In her fourth novel, bestselling author Emily St. John Mandel tells a story about the relationships that sustain us, the fleeting...

Hey, Wall: A Story of Art and Community

MSRP:
Now:
As low as
Was:
“Verde’s unique style and simple yet increasingly important messages of peace, mindfulness, and community make her stories a must-share...A must-purchase.” —School Library Journal (starred...