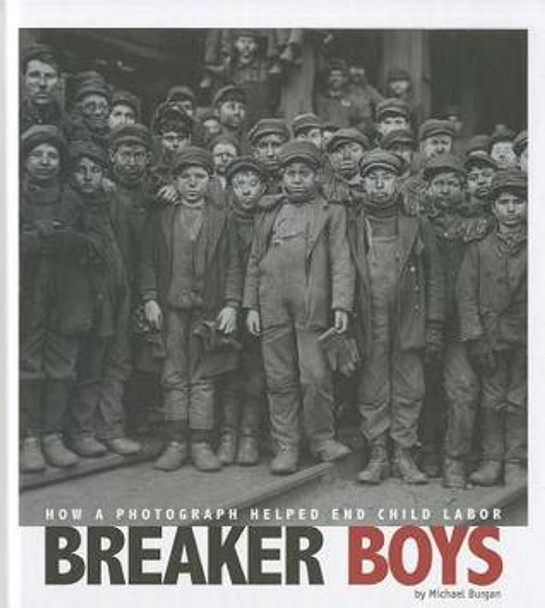 MSRP:
Now: List Price $8.95
Was:
— You save
Paperback
This product qualifies for FREE US Ground Shipping on orders over $100.

Little boys, some as young as 6, spent their long days, not playing or studying, but sorting coal in dusty, loud, and dangerous conditions. Many of these breaker boys worked 10 hours a day, six days a week all for as little as 45 cents a day. Child labor was common in the United States in the 19th century. It took the compelling, heart breaking photographs of Lewis Hine and others to bring the harsh working conditions to light. Hine and his fellow Progressives wanted to end child labor. He knew photography would reveal the truth and teach and change the world. With his camera Hine showed people what life was like for immigrants, the poor, and the children working in mines, factories, and mills. In the words of an historian, the more than 7,000 photos Hine took of American children at work aroused public sentiment against child labor in a way that no printed page or public lecture could.

The book, Breaker Boys: How a Photograph Helped End Child Labor (Captured History) [Bulk, Wholesale, Quantity] ISBN# 9780756545109 in Paperback by Michael Burgan may be ordered in bulk quantities. Minimum starts at 25 copies. Availability based on publisher status and quantity being ordered.
View AllClose

Changing Normal: How I Helped My Husband Beat Cancer

MSRP:
Now:
As low as
Was:
New York Times bestselling author, memory expert, radio host, and beloved actor Marilu Henner delivers an intimate account of how she and her husband stood together in the face of cancer and...

Gordon Parks: How the Photographer Captured Black and White America

MSRP:
Now:
As low as
Was:
His white teacher tells her all-black class, You'll all wind up porters and waiters. What did she know? Gordon Parks is most famous for being the first black director in Hollywood. But before he made...

A Computer Called Katherine: How Katherine Johnson Helped Put America on the Moon

MSRP:
Now:
As low as
Was:
The inspiring true story of mathematician Katherine Johnson--made famous by the award-winning film Hidden Figures--who counted and computed her way to NASA and helped put a man on the moon! ...

MSRP:
Now:
As low as
Was:
Millions of tons of plastic slip into oceans every year. Some floats and travels slowly with the currents, endangering the health of marine animals. The rest is hardly visible but is far more...

MSRP:
Now:
As low as
Was:
The shocking truth about postwar adoption in America, told through the bittersweet story of one teenager, the son she was forced to relinquish, and their search to find each other During the Baby...

Reflections on the Sunday Gospel: How to More Fully Live Out Your Relationship with God

MSRP:
Now:
As low as
Was:
Pope Francis illuminates a new, vibrant way of experiencing the Gospel through moving, intimate, and deeply meditative reflections that encourage us to live fully with meaning, purpose, and strength...

MSRP:
Now:
As low as
Was:
Sample the country’s most tantalizing tacos paired with equally inventive tequila-inspired cocktails—from seasoned food writer and libation enthusiast Katherine Cobbs. Tacos have been trending for...

MSRP:
Now:
As low as
Was:
While the news out of the Muslim world has been focused on the threat of extremism from ISIS and Al Qaeda, a quiet but powerful shift has been taking place among women. In the last 10 years alone,...

MSRP:
Now:
As low as
Was:
An expert in integrative medicine helps women lose weight and look and feel years younger with a simple, science-based thirty-day plan that focuses on one magic word: testosterone. As women grow...

The Trumpet of the Swan [Paperback]

MSRP:
Now:
As low as
Was:
Like the rest of his family, Louis is a trumpeter swan. But unlike his four brothers and sisters, Louis can't trumpet joyfully. In fact, he can't even make a sound. And since he can't trumpet his...