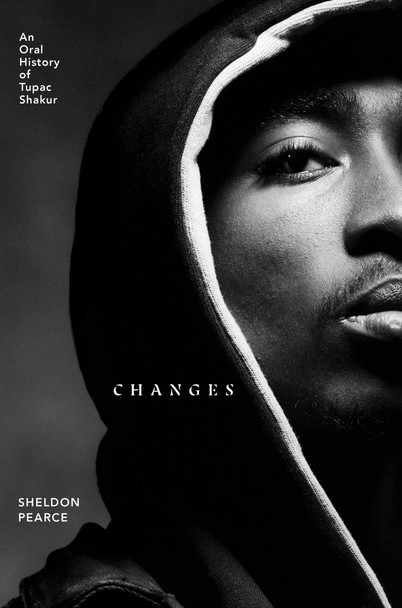 In the summer of 2020, Tupac Shakur’s single “Changes” became an anthem for the worldwide protests against the murder of George Floyd. The song became so popular, in fact, it was vaulted back onto the iTunes charts more than twenty years after its release—making it clear that Tupac’s music and the way it addresses systemic racism, police brutality, mass incarceration, income inequality, and a failing education system is just as important now as it was back then.

In Changes, published to coincide with the fiftieth anniversary of Tupac’s birth and twenty-fifth anniversary of his death, Sheldon Pearce offers one of the most thoughtful and comprehensive accounts yet of the artist’s life and legacy. Pearce, an editor and writer at The New Yorker, interviews dozens who knew Tupac throughout various phases of his life. While there are plenty of bold-faced names, the book focuses on the individuals who are lesser known and offer fresh stories and rare insight. Among these are the actor who costarred with him in a Harlem production of A Raisin in the Sun when he was twelve years old, the high school drama teacher who recognized and nurtured his talent, the music industry veteran who helped him develop a nonprofit devoted to helping young artists, the Death Row Records executive who has never before spoken on the record, and dozens of others. Meticulously woven together by Pearce, their voices combine to portray Tupac in all his complexity and contradiction.

This remarkable book illustrates not only how he changed during his brief twenty-five years on this planet, but how he forever changed the world.

The book, Changes: An Oral History of Tupac Shakur [Bulk, Wholesale, Quantity] ISBN# 9781982170462 in Hardcover by Sheldon Pearce may be ordered in bulk quantities. Minimum starts at 25 copies. Availability based on publisher status and quantity being ordered.
View AllClose

The Only Plane in the Sky: An Oral History of 9/11

MSRP:
Now:
As low as
Was:
The first comprehensive oral history of September 11, 2001—a panoramic narrative woven from the voices of Americans on the front lines of an unprecedented national trauma. Over the past eighteen...

MSRP:
Now:
As low as
Was:
NEW YORK TIMES BESTSELLER “This is history at its most immediate and moving…A marvelous and memorable book.” —Jon Meacham “Remarkable…A priceless civic gift…On page after page, a reader will...

World War Z: An Oral History of the Zombie War

MSRP:
Now:
As low as
Was:
The Zombie War came unthinkably close to eradicating humanity. Max Brooks, driven by the urgency of preserving the acid-etched first-hand experiences of the survivors from those apocalyptic years,...

MSRP:
Now:
As low as
Was:
Megan Mullally and Nick Offerman reveal the full story behind their epic romance--presented in a series of intimate conversations between the couple, including photos, anecdotes, and the occasional...

MSRP:
Now:
As low as
Was:
This entry in the Very Peculiar History™ series arms you with an introduction to the scientific concepts behind climate change—along with the bizarre facts and disputes accompanying the theory. ...

Cat and Rat: The Legend of the Chinese Zodiac

MSRP:
Now:
As low as
Was:
Caldecott Medal-winning author and illustrator Ed Young brings an ancient Chinese folktale to life in the children's picture book Cat and Rat. To select the animals of the zodiac, the Jade Emperor...

MSRP:
Now:
As low as
Was:
Put on your hats, rain boots, and sunglasses and get ready for an experience in It’s all about… Wild Weather! Read about twisting tornadoes and fierce floods, how the wildest weather can cause the...

How to Change Everything: The Young Human's Guide to Protecting the Planet and Each Other

MSRP:
Now:
As low as
Was:
An empowering, engaging young readers guide to understanding and battling climate change from the expert and bestselling author of This Changes Everything and On Fire, Naomi Klein. Warmer...

MSRP:
Now:
As low as
Was:
Known for her outstanding performances on the groundbreaking television series The Good Wife and ER, Julianna Margulies deftly chronicles her life and her work in this deeply powerful memoir. “At...

It's Not Complicated: Simple Recipes for Every Day

MSRP:
Now:
As low as
Was:
From bestselling author and the star of Food Network’s The Kitchen, It’s Not Complicated offers recipes designed to simplify cooking (and life!) After years of throwing lavish, carefully planned...

MSRP:
Now:
As low as
Was:
The Medium Tucson Journal Gift Set is the ideal journal for taking on the go and storing important notes throughout the day. This customizable journal features 160 lined white pages, an elegant...

MSRP:
Now:
As low as
Was:
Tommy Siegel's Candy Hearts comics offer a hysterical window into the many ways romantic couples are not at all on the same page. From the awkwardness of flirting during a pandemic to scrolling...

High Conflict: Why We Get Trapped and How We Get Out

MSRP:
Now:
As low as
Was:
From the New York Times bestselling author of The Smartest Kids in the World comes the first major book to use cutting-edge science and investigative reporting to explain the lure of malignant...

What Color Is Your Parachute? Job-Hunter's Workbook, Sixth Edition: A Companion to the World's Most Popular and Bestselling Career Handbook (Revised)

MSRP:
Now:
As low as
Was:
An interactive companion to the world's most popular job-search book, updated for 2021, that helps you translate your personal interests into marketable job skills. This fill-in workbook for the...