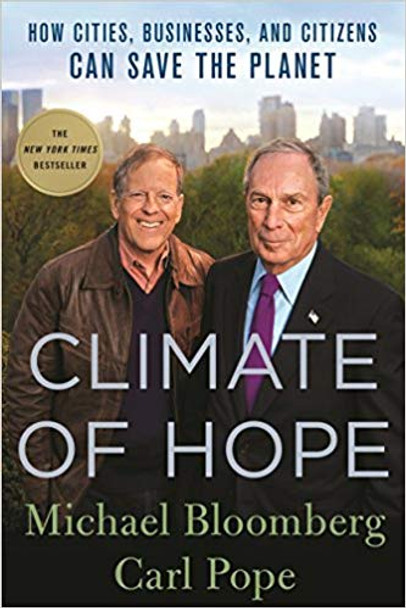 From Mayor Michael Bloomberg and former head of the Sierra Club Carl Pope comes a manifesto on how the benefits of taking action on climate change are concrete, immediate, and immense. They explore climate change solutions that will make the world healthier and more prosperous, aiming to begin a new type of conversation on the issue that will spur bolder action by cities, businesses, and citizens―and even, someday, by Washington. "Climate of Hope is an inspiring must read." ―Former Vice President Al Gore, Chairman of The Climate Reality Project “Climate change threatens to reshape the future of our world's population centers. Bloomberg and Pope have been leaders on fortifying our cities against this threat, and their book proves that victory is possible―and imperative.” ―Leonardo DiCaprio "If Trump is looking for a blueprint, he could not do better than to read a smart new book, Climate of Hope." ―Thomas Friedman in The New York Times ~ The 2016 election left many people who are concerned about the environment fearful that progress on climate change would come screeching to a halt. But not Michael Bloomberg and Carl Pope. Bloomberg, an entrepreneur and former mayor of New York City, and Pope, a lifelong environmental leader, approach climate change from different perspectives, yet they arrive at similar conclusions. Without agreeing on every point, they share a belief that cities, businesses, and citizens can lead―and win―the battle against climate change, no matter which way the political winds in Washington may shift. In Climate of Hope, Bloomberg and Pope offer an optimistic look at the challenge of climate change, the solutions they believe hold the greatest promise, and the practical steps that are necessary to achieve them. Writing from their own experiences, and sharing their own stories from government, business, and advocacy, Bloomberg and Pope provide a road map for tackling the most complicated challenge the world has ever faced. Along the way, they turn the usual way of thinking about climate change on its head: from top down to bottom up, from partisan to pragmatic, from costs to benefits, from tomorrow to today, and from fear to hope.

The book, Climate of Hope: How Cities, Businesses, and Citizens Can Save the Planet [Bulk, Wholesale, Quantity] ISBN# 9781250142085 in Paperback by Michael Bloomberg; Carl Pope may be ordered in bulk quantities. Minimum starts at 25 copies. Availability based on publisher status and quantity being ordered.
View AllClose

Political Risk: How Businesses and Organizations Can Anticipate Global Insecurity

MSRP:
Now:
As low as
Was:
From New York Times bestselling author and former U.S. secretary of state Condoleezza Rice and Stanford University professor Amy B. Zegart comes an examination of the rapidly evolving state of...

All We Can Save: Truth, Courage, and Solutions for the Climate Crisis

MSRP:
Now:
As low as
Was:
Provocative and illuminating essays from women at the forefront of the climate movement who are harnessing truth, courage, and solutions to lead humanity forward. There is a renaissance blooming in...

Climate of Hope: How Cities, Businesses, and Citizens Can Save the Planet [Hardcover]

MSRP:
Now:
As low as
Was:
From former New York City mayor Michael Bloomberg and former chairman of the Sierra Club Carl Pope comes a New York Times Bestseller on the benefits of taking action on climate change. Watch the book...

The Compass and the Nail: How the Patagonia Model of Loyalty Can Save Your Business, and Might Just Save the Planet

MSRP:
Now:
As low as
Was:
Why do some companies create such strong affection for their brands that their customers are compelled to become active brand champions? Is there a secret? The Compass and the Nail presents an...

All We Can Save: Truth, Courage, and Solutions for the Climate Crisis [Paperback]

MSRP:
Now:
As low as
Was:
NATIONAL BESTSELLER • Provocative and illuminating essays from women at the forefront of the climate movement who are harnessing truth, courage, and solutions to lead humanity forward. NAMED ONE...

MSRP:
Now:
As low as
Was:
Follow the big red truck on its cross-country journey in Donald Crew's classic wordless book, perfect for sharing with the very young.... The book, Truck [Bulk, Wholesale, Quantity] ISBN#...

MSRP:
Now:
As low as
Was:
From an inauspicious beginning at the tiny Left Bank Theatre de Babylone in 1953, followed by bewilderment among American and British audiences, Waiting for Godot has become of the most important and...

MSRP:
Now:
As low as
Was:
Here comes the bride! Rachel's Aunt Angela is a talented wedding planner. She's organizing the biggest wedding Tippington has ever seen -- and she needs Rachel and Kirsty's help! Rachel and Kirsty...

Stop the Chaos: How to Get Control of Your Life by Beating Alcohol and Drugs

MSRP:
Now:
As low as
Was:
Written by a counselor with 35 years experience, this guide will help readers who suspect that they themselves, or a loved one, are abusing drugs or alcohol. Stop the Chaos helps readers determine if...

MSRP:
Now:
As low as
Was:
End the yo-yo dieting cycle... forever. Welcome to the Food Freedom plan. Millions of people have successfully completed the groundbreaking Whole30 program and radically transformed their energy,...

MSRP:
Now:
As low as
Was:
The Tucson Scribe Journal offers several features that make it a useful and beautiful custom journal. The pen and pen loop hidden within the die-cut edge gives the journal a sleek look while...

MSRP:
Now:
As low as
Was:
For readers who enjoyed Wonder and Counting by 7's, award-winning author Donna Gephart crafts a compelling dual narrative about two remarkable young people: Lily, a transgender girl, and Dunkin, a...

Liars, Leakers, and Liberals: The Case Against the Anti-Trump Conspiracy [Paperback]

MSRP:
Now:
As low as
Was:
Get the story the Fake News media doesn't want you to hear in the #1 New York Times bestseller: a withering indictment of the Deep State plot against Trump and a firsthand account of the real...