Consumed by Hate, Redeemed by Love: How a Violent Klansman Became a Champion of Racial Reconciliation 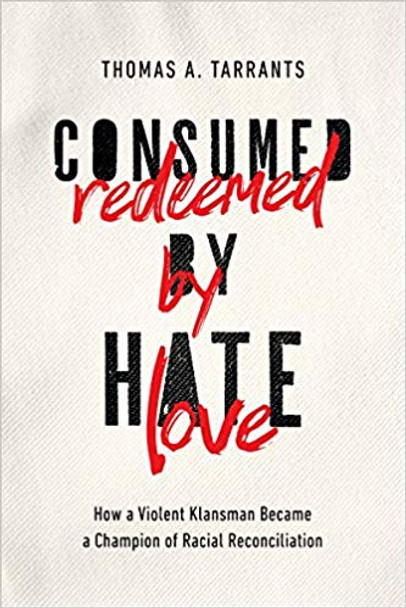 Consumed by Hate, Redeemed by Love: How a Violent Klansman Became a Champion of Racial Reconciliation

**A 2019 OWL AWARD LONGLIST WINNER IN THE BIOGRAPHY & MEMOIR CATEGORY**

"Riveting, inspiring, at times hard to believe but utterly true...it gives some measure of hope in these rancorous times." -- John Grisham

How a bomb-making white supremacist, once called "the most dangerous man in Mississippi," met Jesus in prison and emerged a committed advocate for Christian discipleship, peace, and racial justice.

As a high school student in the 1960s, Tom Tarrants was seduced by extremist ideology and radicalized during the social upheaval of the era. Before long, he became involved in the reign of terror spread by Mississippi's dreaded White Knights of the Ku Klux Klan, described by the FBI as the most violent rightwing terrorist organization in America. Shot multiple times and arrested by police after an attempt to bomb the home of a Jewish leader in Meridian, MS, Tom was sentenced to thirty years in the Mississippi State Penitentiary. After recovering from near-fatal wounds, Tarrants and two other inmates escaped. An FBI SWAT team tracked them down, killing one of the convicts, and Tom spent the next three years alone in a 6'x9' cell. Tom began a search for truth that led him to the Bible and a reading of the gospels, resulting in his conversion to Christianity and liberation from racial hate and violence.

After serving eight years of a thirty-five-year sentence, Tom attended college, moved to Washington, DC, and became co-pastor of a racially mixed church. He went on to earn a doctorate and became the president of the C.S. Lewis Institute, where he devoted himself to helping others become wholehearted followers of Jesus. A dramatic story of radical transformation, this book demonstrates that hope is not lost even in the most tumultuous of times, such as our own.

The book, Consumed by Hate, Redeemed by Love: How a Violent Klansman Became a Champion of Racial Reconciliation [Bulk, Wholesale, Quantity] ISBN# 9781400215324 in Hardcover by Thomas A. Tarrants may be ordered in bulk quantities. Minimum starts at 25 copies. Availability based on publisher status and quantity being ordered.

Love, Hate and Other Filters

MSRP:
Now:
As low as
Was:
A NEW YORK TIMES BESTSELLER In this unforgettable debut novel, an Indian-American Muslim teen copes with Islamophobia, cultural divides among peers and parents, and a reality she can neither explain...

Unstoppable: From Underdog to Undefeated: How I Became a Champion

MSRP:
Now:
As low as
Was:
Anthony Robles is a three-time all-American wrestler, the 2011 NCAA National Wrestling Champion, and a Nike-sponsored athlete. He was also born without his right leg. Doctors could not explain to his...

How I Became a Pirate

MSRP:
Now:
As low as
Was:
Pirates have green teeth—when they have any teeth at all. I know about pirates, because one day, when I was at the beach building a sand castle and minding my own business, a pirate ship sailed into...

Black Klansman: Race, Hate, and the Undercover Investigation of a Lifetime

MSRP:
Now:
As low as
Was:
The New York Times Bestseller! The extraordinary true story and basis for the major motion picture BlacKkKlansman, written and directed by Spike Lee, produced by Jordan Peele, and starring John...

Love, Hate and Other Filters [Hardcover]

MSRP:
Now:
As low as
Was:
A NEW YORK TIMES BESTSELLER In this unforgettable debut novel, an Indian-American Muslim teen copes with Islamophobia, cultural divides among peers and parents, and a reality she can neither explain...

In the Country We Love: My Family Divided (Updated with New Material)

MSRP:
Now:
As low as
Was:
The star of Orange is the New Black and Jane the Virgin presents her personal story of the real plight of undocumented immigrants in this country Diane Guerrero, the television actress from the...

Renegades: Born in the USA

MSRP:
Now:
As low as
Was:
Two longtime friends share an intimate and urgent conversation about life, music, and their enduring love of America, with all its challenges and contradictions, in this stunningly produced expansion...

So You Want to Talk about Race [Paperback]

MSRP:
Now:
As low as
Was:
In this New York Times bestseller, Ijeoma Oluo offers a hard-hitting but user-friendly examination of race in America Widespread reporting on aspects of white supremacy--from police brutality to the...

The Shame Machine: Who Profits in the New Age of Humiliation

MSRP:
Now:
As low as
Was:
A clear-eyed warning about the increasingly destructive influence of America’s “shame industrial complex” in the age of social media and hyperpartisan politics—from the New York Times bestselling...