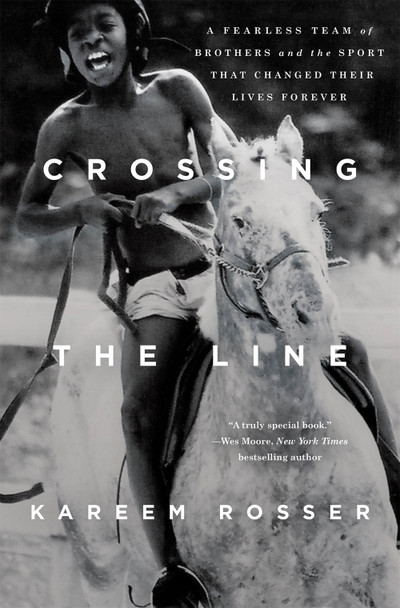 "A marvelous addition to the literature of inspirational sports stories." - Booklist (Starred Review)

An inspiring memoir of defying the odds from Kareem Rosser, captain of the first all-black squad to win the National Interscholastic Polo championship. "Crossing the Line will not just leave you with hope, but also ideas on how to make that hope transferable” (New York Times bestselling author Wes Moore).

Born and raised in West Philadelphia, Kareem thought he and his siblings would always be stuck in “The Bottom”, a community and neighborhood devastated by poverty and violence. Riding their bicycles through Philly’s Fairmount Park, Kareem’s brothers discover a barn full of horses. Noticing the brothers’ fascination with her misfit animals, Lezlie Hiner, founder of The Work to Ride stables, offers them their escape: an after school job in exchange for riding lessons.

What starts as an accidental discovery turns into a love for horseback riding that leads the Rossers to discovering their passion for polo. Pursuing the sport with determination and discipline, Kareem earns his place among the typically exclusive players in college, becoming part of the first all-Black national interscholastic polo championship team―all while struggling to keep his family together.

Crossing the Line: A Fearless Team of Brothers and the Sport That Changed Their Lives Forever is the story of bonds of brotherhood, family loyalty, the transformative connection between man and horse, and forging a better future that comes from overcoming impossible odds.

The book, Crossing the Line: A Fearless Team of Brothers and the Sport That Changed Their Lives Forever [Bulk, Wholesale, Quantity] ISBN# 9781250270863 in Hardcover by Kareem Rosser may be ordered in bulk quantities. Minimum starts at 25 copies. Availability based on publisher status and quantity being ordered.

Win Forever: Live, Work, and Play Like a Champion

MSRP:
Now:
As low as
Was:
Updated with a new chapter on Carroll's successful first season with the Seattle Seahawks Pete Carroll is one of the most successful coaches in football today. As the head coach at USC, he brought...

Glory Road: My Story of the 1966 NCAA Basketball Championship and How One Team Triumphed Against the Odds and Changed America Forever

MSRP:
Now:
As low as
Was:
Timed to the release of Jerry Bruckheimer's movie, the moving autobiography of Hall of Fame basketball coach Don Haskins and his storied team of players, the Texas Western Miners In 1966, college...

How to Live Forever: The Enduring Power of Connecting the Generations

MSRP:
Now:
As low as
Was:
The secret to happiness, longevity, and living on is through mentoring the next generation In How to Live Forever, Encore.org founder and CEO Marc Freedman tells the story of his thirty-year quest...

The Black Arts: How Opposition Research Weaponized the Truth and Changed Politics Forever

MSRP:
Now:
As low as
Was:
The first book to tell the story of political opposition research-- how it is done and why it matters-- by a former member of President Obama's staff whose meteoric rise as a campaign operative...

This Life I Live: One Man's Extraordinary, Ordinary Life and the Woman Who Changed It Forever

MSRP:
Now:
As low as
Was:
The story she said he was born to write. Her story. His story. The love story of Joey and Rory. By inviting so many into the final months of Joey’s life as she battled cancer, Joey and Rory Feek...

MSRP:
Now:
As low as
Was:
A citizen's guide to America's most debated policy-in-waiting There are few issues as consequential in the lives of Americans as health care--and few issues more politically vexing. Every single...

The Moment of Lift: How Empowering Women Changes the World [Paperback]

MSRP:
Now:
As low as
Was:
NEW YORK TIMES BESTSELLER How can we summon a moment of lift for human beings―and especially for women? Because when you lift up women, you lift up humanity. For the last twenty years, Melinda...