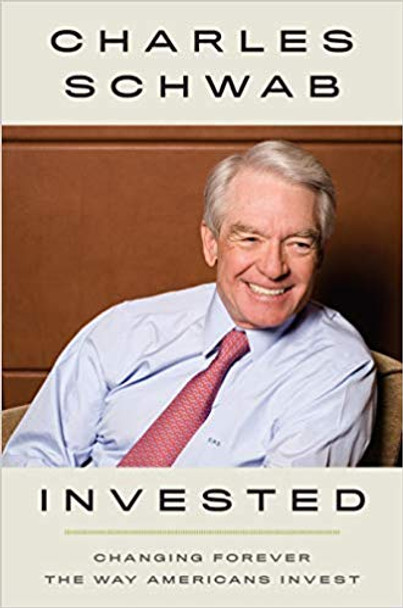 “To say Charles Schwab is an entrepreneur is actually an understatement. He really is a revolutionary.”—Phil Knight, co-founder of Nike, author of Shoe Dog

The founder of The Charles Schwab Corporation recounts his ups and downs as he made stock investing, once the expensive and clubby reserve of the few, accessible to ordinary Americans.

In this deeply personal memoir, Schwab describes his passion to have Main Street participate in the growing economy as investors and owners, not only earners. Schwab opens up about his dyslexia and how he worked around and ultimately embraced it, and about the challenges he faced while starting his fledgling company in the 1970s. A year into his grand experiment in discounted stock trading, living in a small apartment in Sausalito with his wife, Helen, and new baby, he carried a six-figure debt and a pocketful of personal loans. As it turned out, customers flocked to Schwab, leaving his small team scrambling with scarce resources and no road map to manage the company’s growth.

He recounts the company’s game-changing sale to Bank of America—and how, in the end, the merger almost doomed his organization. We learn about the clever and timely leveraged buyout he crafted to regain independence; the crushing stock market collapse of 1987, just weeks after the company had gone public; the dot-com meltdown of 2000 and its reverberating aftermath of economic stagnation, layoffs, and the company’s eventual reinvention; and how the company’s focus on managing risk protected it and its clients during the financial crisis in 2008, propelling its growth.

A remarkable story of a company succeeding by challenging norms and conventions through decades of change, Invested also offers unique insights and lifelong principles for readers—the values that Schwab has lived and worked by that have made him one of the most successful entrepreneurs of our time. Today, his eponymous company is one of the leading financial services firms in the world.

The book, Invested: Changing Forever the Way Americans Invest [Bulk, Wholesale, Quantity] ISBN# 9781984822543 in Hardcover by Charles Schwab may be ordered in bulk quantities. Minimum starts at 25 copies. Availability based on publisher status and quantity being ordered.
View AllClose

Invested: How I Learned to Master My Mind, My Fears, and My Money to Achieve Financial Freedom and Live a More Authentic Life (with a Little Help from Warren Buffett, Charlie Munger, and My Dad)

MSRP:
Now:
As low as
Was:
In this essential handbook—a blend of Rich Dad, Poor Dad and The Happiness Project—the co-host of the wildly popular InvestED podcast shares her yearlong journey learning to invest, as taught to her...

Invested: How Warren Buffett and Charlie Munger Taught Me to Master My Mind, My Emotions, and My Money

MSRP:
Now:
As low as
Was:
In this essential handbook—a blend of Rich Dad, Poor Dad and The Happiness Project—the co-host of the wildly popular InvestED podcast shares her yearlong journey learning to invest, as taught to her...

The Giving Way to Happiness: Stories and Science Behind the Life-Changing Power of Giving

MSRP:
Now:
As low as
Was:
A guide to how giving can be the key to happiness—combining the latest research with firsthand accounts from Goldie Hawn, Nobel Peace Prize winner Muhammad Yunus, and others. As a Philanthropy...

The Jewish American Paradox: Embracing Choice in a Changing World

MSRP:
Now:
As low as
Was:
Jews in America are in a period of unprecedented status and impact, but for many their identity as Jews--religiously, historically, culturally--is increasingly complicated. Many are becoming Jews...

MSRP:
Now:
As low as
Was:
A revelatory biography of the first Black woman to stand for Vice President, charting how the daughter of two immigrants in segregated California became one of this country’s most effective power...

MSRP:
Now:
As low as
Was:
Installing agile tools and practices won't be enough to respond to rapid market change unless you lay the groundwork with six key enabling factors, identified by the United Kingdom's leading agile...

Alone on the Wall [Paperback]

MSRP:
Now:
As low as
Was:
For fans of Tiny, Biscuit, and Charlie the Ranch Dog comes an easy-to-read series about a rambunctious, mischievous, and totally lovable bulldog, Rollo! Rollo is a good dog. But sometimes he does...

The Case for Grace: A Journalist Explores the Evidence of Transformed Lives

The Girl and the Wolf

MSRP:
Now:
As low as
Was:
While picking berries with her mother, a little girl wanders too far into the woods. When she realizes she is lost, she begins to panic. A large grey wolf makes a sudden appearance between some...

MSRP:
Now:
As low as
Was:
Tracy Kidder is a winner of the Pulitzer Prize and the author of the bestsellers The Soul of a New Machine, House, Among Schoolchildren, and Home Town. He has been described by the Baltimore Sun as...

The Coffee Bean: A Simple Lesson to Create Positive Change

MSRP:
Now:
As low as
Was:
From bestselling author Jon Gordon and rising star Damon West comes The Coffee Bean: an illustrated fable that teaches readers how to transform their environment, overcome challenges, and create...