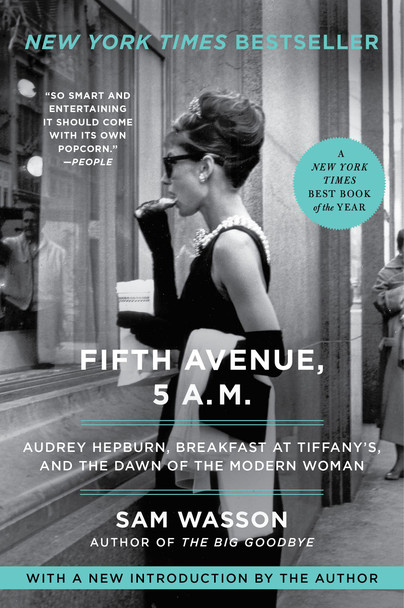 Coinciding with the sixtieth anniversary of the film version of Truman Capote’s Breakast at Tiffany’s, the acclaimed, New York Times bestseller that is the definitive account of Audrey Hepburn and the making of the cultural landmark film—now updated with a new introduction by the author.

In Fifth Avenue, 5 A.M., Sam Wasson goes beyond the legend to explore the woman inside the little black dress and the film that captured the imagination of the nation in 1961—when the staid propriety of the Eisenhower years gave way to the glamorous modernity of the Kennedys. With a colorful cast of characters including Truman Capote, Edith Head, Givenchy, Moon River composer Henry Mancini, and, of course, the iconic Audrey Hepburn herself, Wasson immerses us in the America of the late fifties and early sixties before Woodstock and birth control, when an alluring, not-so-virginal girl by the name of Holly Golightly melted hearts, raised eyebrows, and forever transformed Americans’ notions of fashion, film, sex, and culture.

The book, Fifth Avenue, 5 A.M.: Audrey Hepburn, Breakfast at Tiffany's, and the Dawn of the Modern Woman [Bulk, Wholesale, Quantity] ISBN# 9780063115446 in Paperback by Sam Wasson may be ordered in bulk quantities. Minimum starts at 25 copies. Availability based on publisher status and quantity being ordered.
View AllClose

MSRP:
Now:
As low as
Was:
Two men wait through the night in British-controlled Palestine for dawn--and for death. One is a captured English officer. The other is Elisha, a young Israeli freedom fighter whose assignment is to...

Disrupt-Her: A Manifesto for the Modern Woman

MSRP:
Now:
As low as
Was:
From the co-founder of THINX and hellotushy.com, start-ups collectively valued at more than $150 million, comes DISRUPT-HER, a rallying cry for women to radically question the status quo. Miki...

Mogul, Mom, & Maid: The Balancing Act of the Modern Woman

MSRP:
Now:
As low as
Was:
The state of working women has been declared, debunked and debated since the days of Rosie the Riveter. The headlines, and the statistics behind them, however, don’t tell the whole story. The truth...

MSRP:
Now:
As low as
Was:
A ZOELLA Book Club Pick! From the #1 New York Times bestselling author of the Shopaholic series comes a terrific blend of comedy, romance, and psychological recovery in a contemporary YA novel sure...

MSRP:
Now:
As low as
Was:
The wait is over for the paperback of this irresistible, fast-paced, hit-worthy debut! When funny, charming, absolutely-normal Audrey Cuttler dumps her boyfriend Evan, he writes a song about her that...

MSRP:
Now:
As low as
Was:
A landmark biography by two prizewinning Washington Post reporters that reveals how systemic racism shaped George Floyd's life and legacy—from his family’s roots in the tobacco fields of North...

The Black Agenda: Bold Solutions for a Broken System

MSRP:
Now:
As low as
Was:
"The Black Agenda mobilizes top Black experts from across the country to share transformative perspectives on how to deploy anti-racist ideas and policies into everything from climate policy to...

Some Kids Left Behind: A Survivor's Fight for Health Care in the Wake of 9/11

MSRP:
Now:
As low as
Was:
A BookPal Staff Pick for August 2021 For the 20th anniversary of 9/11 comes an awe-inspiring account of the schoolchildren poisoned by the toxic air left in the wake of the Twin...

MSRP:
Now:
As low as
Was:
**A 2018 OWL AWARD SHORTLIST WINNER IN THE POLITICS & CURRENT EVENTS CATEGORY**THE INSIDE STORY ON PRESIDENT TRUMP, AS ONLY BOB WOODWARD CAN TELL IT With authoritative reporting honed through...

Don't Give the Enemy a Seat at Your Table: It's Time to Win the Battle of Your Mind...

MSRP:
Now:
As low as
Was:
Discover how to break free from the chains of negative thinking and experience true freedom from unhealthy thoughts and emotions. The Enemy is constantly seeking to fill your mind with destructive...

MSRP:
Now:
As low as
Was:
“To say love is what makes a marriage work is like saying it takes oxygen to climb a mountain. Yes, oxygen is necessary. But not sufficient.” For more than a decade, readers of the bestselling...

For Such a Time as This: My Faith Journey Through the White House and Beyond

MSRP:
Now:
As low as
Was:
New York Times Bestseller! Kayleigh McEnany describes her path to the White House podium, bringing the reader behind the scenes in the world’s most powerful building and illuminating how faith got...

Author in Chief: The Untold Story of Our Presidents and the Books They Wrote [Paperback]

MSRP:
Now:
As low as
Was:
“One of the best books on the American presidency to appear in recent years” (The Wall Street Journal) and based on a decade of research and reporting—a delightful new window into the public and...