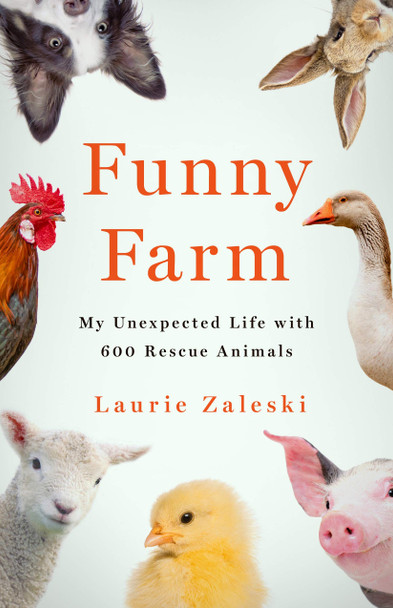 An inspiring and moving memoir of the author's turbulent life with 600 rescue animals.

Laurie Zaleski never aspired to run an animal rescue; that was her mother Annie’s dream. But from girlhood, Laurie was determined to make the dream come true. Thirty years later as a successful businesswoman, she did it, buying a 15-acre farm deep in the Pinelands of South Jersey. She was planning to relocate Annie and her caravan of ragtag rescues―horses and goats, dogs and cats, chickens and pigs―when Annie died, just two weeks before moving day. In her heartbreak, Laurie resolved to make her mother's dream her own. In 2001, she established the Funny Farm Animal Rescue outside Mays Landing, New Jersey. Today, she carries on Annie’s mission to save abused and neglected animals.

Funny Farm is Laurie’s story: of promises kept, dreams fulfilled, and animals lost and found. It’s the story of Annie McNulty, who fled a nightmarish marriage with few skills, no money and no resources, dragging three kids behind her, and accumulating hundreds of cast-off animals on the way. And lastly, it's the story of the brave, incredible, and adorable animals that were rescued.

The book, Funny Farm: My Unexpected Life with 600 Rescue Animals [Bulk, Wholesale, Quantity] ISBN# 9781250272836 in Hardcover by Laurie Zaleski may be ordered in bulk quantities. Minimum starts at 25 copies. Availability based on publisher status and quantity being ordered.
View AllClose

MSRP:
Now:
As low as
Was:
It's autumn in Grand River, and as Keisha and her pals prepare for Halloween, a phone call comes in to Carters' Urban Rescue: a deer has been spotted in the neighborhood . . . with a pumpkinon his...

MSRP:
Now:
As low as
Was:
With his tender, funny memoir of four decades in the business, Alan Zweibel traces the history of American comedy. Alan Zweibel started his comedy career selling jokes for seven dollars apiece to...

MSRP:
Now:
As low as
Was:
Maggie's adventures in the Enchanted Forest continue in the third book of a new chapter book series by E. D. Baker! Maggie is loving her new life now that she gets to help her friend, Bob, take care...

MSRP:
Now:
As low as
Was:
Known for her outstanding performances on the groundbreaking television series The Good Wife and ER, Julianna Margulies deftly chronicles her life and her work in this deeply powerful memoir. “At...

MSRP:
Now:
As low as
Was:
The intimate, untold story of Winston Churchill's enduring yet volatile bond with his only son, Randolph “Fascinating… well-researched and well-written.”—Andrew Roberts • “Beautifully written… A...

MSRP:
Now:
As low as
Was:
For spiritual "quality time" with your five - to eight-year-old children, check out Bible Prayers for Bedtime-going a step beyond the traditional Bible story book! More than five-dozen Bible prayers...

MSRP:
Now:
As low as
Was:
Early one spring morning, disaster struck San Francisco, and a young man grabbed his camera and started documenting the destruction and death surrounding him. Fearlessly going to the center of the...