Living with a Seal: 31 Days Training with the Toughest Man on the Planet 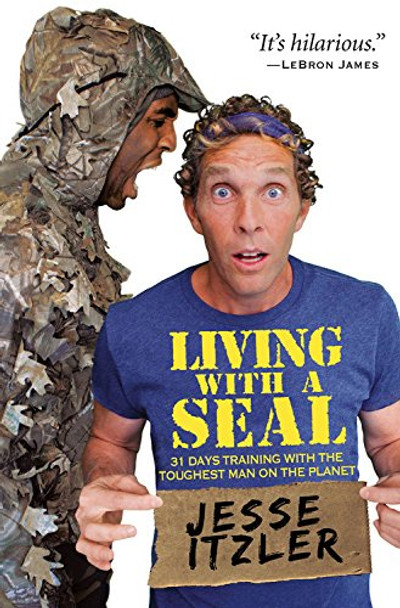 Living with a Seal: 31 Days Training with the Toughest Man on the Planet

Entrepreneur Jesse Itzler will try almost anything. He brazenly pretended to be an established hip-hop artist to secure a meeting with a studio head-and it led to a record deal. He convinced a bunch successful business executives to invest in an unprecedented business plan- and it turned into Marquis Jet. He sincerely offered to run a 100-mile race in Spanx to get the attention of the beautiful founder of the company-and ended up marrying her. His life is about being bold and risky. And it's brought him plenty of rewards. So when Jesse felt himself drifting on autopilot, he hired a rather unconventional trainer to live with him for a month-an accomplished Navy SEAL widely considered to be "the toughest man on the planet"! Living with a SEAL is like a buddy movie if it starred the Fresh Prince of Bel-Air... and Rambo. Jesse is about as easy-going as you can get. SEAL is...not. He even shows up at Jesse's apartment with an inflatable raft just in case the Itzler family ever has to escape Manhattan by crossing the Hudson River. Jesse and SEAL's escapades soon produce a great friendship, and by the time SEAL leaves, Jesse is in the best shape of his life, but he gains much more than muscle. At turns hilarious and inspiring, Living with a SEAL ultimately shows you the benefits of stepping out of your comfort zone.

The book, Living with a Seal: 31 Days Training with the Toughest Man on the Planet [Bulk, Wholesale, Quantity] ISBN# 9781455534685 in Paperback by Jesse Itzler may be ordered in bulk quantities. Minimum starts at 25 copies. Availability based on publisher status and quantity being ordered.
View AllClose

Seize the Day: Living on Purpose and Making Every Day Count

MSRP:
Now:
As low as
Was:
#1 New York Times bestselling author Joyce Meyer shares a purposeful approach to everyday living, helping readers claim the good things God has in store for them each day. Today is no ordinary day...

7 Days of Simplicity: A Season of Living Lightly

MSRP:
Now:
As low as
Was:
Inspired by her iconic 7: An Experimental Mutiny Against Excess, New York Times-bestselling author Jen Hatmaker explores the spiritual side of a simpler life and the way our choices affect our...

Here We Are: Notes for Living on Planet Earth

Living with a Seal: 31 Days Training with the Toughest Man on the Planet [Hardcover]

MSRP:
Now:
As low as
Was:
Entrepreneur Jesse Itzler will try almost anything. He brazenly pretended to be an established hip-hop artist to secure a meeting with a studio head-and it led to a record deal.... The book, Living...

Becoming the Woman God Wants Me to Be: A 90-Day Guide to Living the Proverbs 31 Life

MSRP:
Now:
As low as
Was:
Proverbs 31 woman? No problem! In Becoming the Woman God Wants Me to Be, Partow gives women inspiration and practical direction to move them toward the goal of becoming a modern Proverbs 31 woman...

MSRP:
Now:
As low as
Was:
The New Grand Strategy tells the story of a plan, born within the Pentagon, to recapture America’s greatness at home and abroad by elevating sustainability as our new strategic imperative. It aligns...

MSRP:
Now:
As low as
Was:
Meet Eugene Jerome and his family, fighting the hard times and sometimes each other--with laughter, tears, and love. It is 1937 in Brooklyn during the heart of the Depression. Fifteen-year-old Eugene...

MSRP:
Now:
As low as
Was:
Throughout history, leaders have used solitude as a matter of course. Martin Luther King found moral courage while sitting alone at his kitchen table one night during the Montgomery bus boycott. Jane...