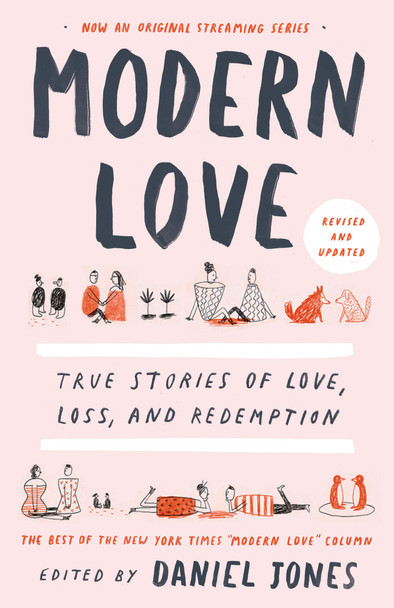 A young woman goes through the five stages of ghosting grief. A man’s promising fourth date ends in the emergency room. A female lawyer with bipolar disorder experiences the highs and lows of dating. A widower hesitates about introducing his children to his new girlfriend. A divorcée in her seventies looks back at the beauty and rubble of past relationships.

These are just a few of the people who tell their stories in Modern Love, Revised and Updated, featuring dozens of the most memorable essays to run in The New York Times “Modern Love” column since its debut in 2004.

Some of the stories are unconventional, while others hit close to home. Some reveal the way technology has changed dating forever; others explore the timeless struggles experienced by anyone who has ever searched for love. But all of the stories are, above everything else, honest. Together, they tell the larger story of how relationships begin, often fail, and—when we’re lucky—endure.

Edited by longtime “Modern Love” editor Daniel Jones and featuring a diverse selection of contributors—including Mindy Hung, Trey Ellis, Ann Hood, Deborah Copaken, Terri Cheney, and more—this is the perfect book for anyone who’s loved, lost, stalked an ex on social media, or pined for true romance: In other words, anyone interested in the endlessly complicated workings of the human heart.

Kisses from Katie: A Story of Relentless Love and Redemption

MSRP:
Now:
As low as
Was:
The New York Times bestslling account of a courageous eighteen-year-old from Nashville who gave up every comfort and convenience to become the adoptive mother to thirteen girls in Uganda.... The...

Hope Heals: A True Story of Overwhelming Loss and an Overcoming Love

MSRP:
Now:
As low as
Was:
When all seems lost, where can hope be found? Katherine and Jay married right after college and sought adventure far from home in Los Angeles, CA. As they pursued their dreams, they planted their...

I Said Yes: My Story of Heartbreak, Redemption, and True Love

MSRP:
Now:
As low as
Was:
When her high-profile search for romance led Emily Maynard to dead end after dead end, real love finally found her. Millions know Emily Maynard Johnson from her unprecedented double appearances on...

MSRP:
Now:
As low as
Was:
Revised & Updated Edition! God is love. Crazy, relentless, all-powerful love. Have you ever wondered if we're missing it? It's crazy, if you think about it. The God of the universe—the Creator...

The Book of Hope: A Survival Guide for Trying Times (Global Icons)

MSRP:
Now:
As low as
Was:
In a world that seems so troubled, how do we hold on to hope? Looking at the headlines―the worsening climate crisis, a global pandemic, loss of biodiversity, political upheaval―it can be hard to...

Give a Sh*t: Do Good. Live Better. Save the Planet.

MSRP:
Now:
As low as
Was:
"The time for stepping up and protecting our planet is now. And this book is an easy, enjoyable place to start." -- Moby It's time to put your good intentions into action. It's time to give a shit...

MSRP:
Now:
As low as
Was:
Early one spring morning, disaster struck San Francisco, and a young man grabbed his camera and started documenting the destruction and death surrounding him. Fearlessly going to the center of the...

MSRP:
Now:
As low as
Was:
The gift of art, the gift of inspiration, the gift of joy. This dynamic illustrated book is brimming over with encouragement and wisdom and delivered with a fresh, modern twist. Pairing quotes with...

MSRP:
Now:
As low as
Was:
**A 2020 OWL AWARD LONGLIST WINNER IN THE HEALTH & WELLNESS CATEGORY**Amazingly delicious and beautiful gluten-free, grain-free, dairy-free, and refined sugar–free desserts from the popular...