Saved by a Song: The Art and Healing Power of Songwriting 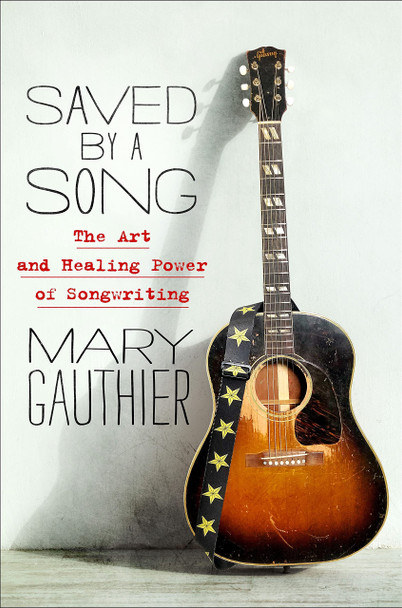 Saved by a Song: The Art and Healing Power of Songwriting

This title is available for pre-order and will be processed on Jul 6th 2021 for shipment.

"Generous and big-hearted, Gauthier has stories to tell and worthwhile advice to share." ―Wally Lamb, author of I Know This Much Is True

"Gauthier has an uncanny ability to combine songwriting craft with a seeker’s vulnerability and a sage’s wisdom.” ―Amy Ray, Indigo Girls

From the Grammy nominated folk singer and songwriter, an inspiring exploration of creativity and the redemptive power of song

Mary Gauthier was twelve years old when she was given her Aunt Jenny’s old guitar and taught herself to play with a Mel Bay basic guitar workbook. Music offered her a window to a world where others felt the way she did. Songs became lifelines to her, and she longed to write her own, one day.

Then, for a decade, while struggling with addiction, Gauthier put her dream away and her call to songwriting faded. It wasn’t until she got sober and went to an open mic with a friend did she realize that she not only still wanted to write songs, she needed to. Today, Gauthier is a decorated musical artist, with numerous awards and recognition for her songwriting, including a Grammy nomination.

In Saved by a Song, Mary Gauthier pulls the curtain back on the artistry of songwriting. Part memoir, part philosophy of art, part nuts and bolts of songwriting, her book celebrates the redemptive power of song to inspire and bring seemingly different kinds of people together.

The book, Saved by a Song: The Art and Healing Power of Songwriting [Bulk, Wholesale, Quantity] ISBN# 9781250202116 in Hardcover by Mary Gauthier may be ordered in bulk quantities. Minimum starts at 25 copies. Availability based on publisher status and quantity being ordered.
View AllClose

Healing Words: The Power of Prayer and the Practice of Medicine

MSRP:
Now:
As low as
Was:
Proving prayer to be as valid and vital a healing tool as drugs or surgery, the bestselling author of Meaning & Medicine and Recovering the Soul offers a bold integration of science and spirituality...

The Healing Power of Mindfulness: A New Way of Being [Paperback]

MSRP:
Now:
As low as
Was:
Discover how mindfulness can help you with healing. More than twenty years ago, Jon Kabat-Zinn showed us the value of cultivating greater awareness in everyday life with his now-classic introduction...

Anatomy of the Spirit: The Seven Stages of Power and Healing

MSRP:
Now:
As low as
Was:
Building on wisdom from Hindu, Christian, and Kaballah traditions, this comprehensive guide to energy healing reveals the hidden stresses, beliefs, and attitudes that cause illness. Anatomy of the...

Light Therapies: A Complete Guide to the Healing Power of Light

MSRP:
Now:
As low as
Was:
A comprehensive guide to the therapeutic benefits of light and color and how they affect our physical and psychological well-being • Shares scientific research on how different wavelengths of light...

The Art of Social Media: Power Tips for Power Users

MSRP:
Now:
As low as
Was:
By now it's clear that whether you're promoting a business, a product, or yourself, social media is near the top of what determines your success or failure. And there are countless pundits, authors,...

America's Heroes: Stories of Courage and Hope from the Frontlines of the Pandemic

MSRP:
Now:
As low as
Was:
In the midst of a period that will leave America forever changed, individuals from all walks of life have stood up to help. First responders and medical professionals on the frontlines. Grocery store...

MSRP:
Now:
As low as
Was:
A BookPal Staff Pick for June 2021 Meghan, The Duchess of Sussex’s first children’s book, The Bench, beautifully captures the special relationship between father and son, as seen through...

MSRP:
Now:
As low as
Was:
Mrs. Pittman's well-to-do Pittsburgh family didn't approve of her marriage, so the young bride moved away and lost touch with her relatives. Years later, she has returned to her native city as a...

Stamped (for Kids): Racism, Antiracism, and You

MSRP:
Now:
As low as
Was:
This chapter book edition of the #1 New York Times bestseller by luminaries Ibram X. Kendi and Jason Reynolds is an essential introduction to the history of racism and antiracism in America RACE...

MSRP:
Now:
As low as
Was:
Essential review and practice for all subject areas of the GED test This book covers all four subjects on the test―Reasoning Through Language Arts (RLA), Social Studies, Science, and Mathematical...

Good Vibes, Good Life: How Self-Love Is the Key to Unlocking Your Greatness

MSRP:
Now:
As low as
Was:
Be the best version of you that YOU can be. How can you learn to truly love yourself?How can you transform negative emotions into positive ones?Is it possible to find lasting happiness? In...

MSRP:
Now:
As low as
Was:
As beloved Little Gorilla grows up, he discovers that love grows with him. Perfect for bedtime or snuggle-time, this warm and timeless classic reassures readers that as they grow and change, they are...

MSRP:
Now:
As low as
Was:
**INSTANT NEW YORK TIMES BESTSELLER** From one of the most followed booktubers today, comes Christine Riccio's Again, but Better, a story about second chances, discovering yourself, and being...

The Code Breaker: Jennifer Doudna, Gene Editing, and the Future of the Human Race

MSRP:
Now:
As low as
Was:
The bestselling author of Leonardo da Vinci and Steve Jobs returns with a gripping account of how Nobel Prize winner Jennifer Doudna and her colleagues launched a revolution that will allow us to...