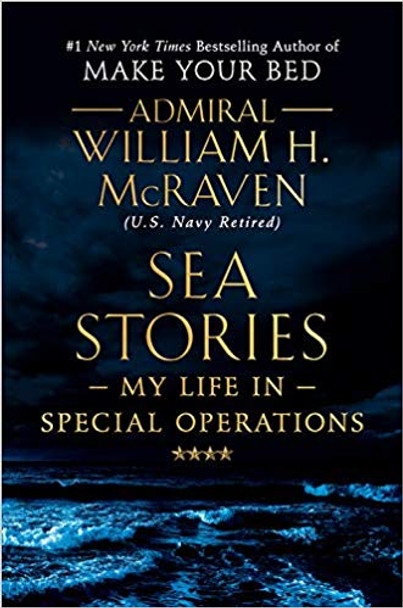 Following the success of his #1 New York Times bestseller Make Your Bed, which has sold over one million copies, Admiral William H. McRaven is back with amazing stories of bravery and heroism from his career as a Navy SEAL and commander of America's Special Operations Forces.

Admiral William H. McRaven is a part of American military history, having been involved in some of the most famous missions in recent memory, including the capture of Saddam Hussein, the rescue of Captain Richard Phillips, and the raid to kill Osama bin Laden.

SEA STORIES begins in 1963 at a French Officer's Club in France, where Allied officers and their wives gathered to have drinks and tell stories about their adventures during World War II -- the place where a young Bill McRaven learned the value of a good story. SEA STORIES is an unforgettable look back on one man's incredible life, from childhood days sneaking into high-security nuclear sites to a day job of hunting terrorists and rescuing hostages.

Action-packed, humorous, and full of valuable life lessons like those exemplified in McRaven's bestselling book, Make Your Bed, SEA STORIES is a remarkable memoir from one of America's most accomplished leaders.

The book, Sea Stories: My Life in Special Operations [Bulk, Wholesale, Quantity] ISBN# 9781538729748 in Hardcover by William H. McRaven may be ordered in bulk quantities. Minimum starts at 25 copies. Availability based on publisher status and quantity being ordered.

The Story of My Life

MSRP:
Now:
As low as
Was:
An American classic rediscovered by each generation, The Story of My Life is Helen Keller’s account of her triumph over deafness and blindness. Popularized by the stage play and movie The Miracle...

It's a Long Story: My Life

MSRP:
Now:
As low as
Was:
What I say is that this is the story of my life, told as clear as a Texas sky and in the same rhythm that I lived it. It's a story of restlessness and the purity of the moment and living right. Of...

To Stop a Warlord: My Story of Justice, Grace, and the Fight for Peace [Paperback]

MSRP:
Now:
As low as
Was:
One woman’s inspiring true story of an unlikely alliance to stop the atrocities of a warlord, proving that there is no limit to what we can do, even in the face of unspeakable injustice and...

Stamped from the Beginning: The Definitive History of Racist Ideas in America [Hardcover]

MSRP:
Now:
As low as
Was:
Some Americans cling desperately to the myth that we are living in a post-racial society, that the election of the first Black president spelled the doom of racism. In fact, racist thought is alive...

The Lost Boys of Sudan: An American Story of the Refugee Experience (Revised)

MSRP:
Now:
As low as
Was:
In 2000 the United States began accepting 3,800 refugees from one of Africa’s longest civil wars. They were just some of the thousands of young men, known as “Lost Boys,” who had been orphaned or...

The Productivity Project: Accomplishing More by Managing Your Time, Attention, and Energy [Hardcover]

MSRP:
Now:
As low as
Was:
A fresh, personal, and entertaining exploration of a topic that concerns all of us: how to be more productive at work and in every facet of our lives. Chris Bailey turned down lucrative job offers...

MSRP:
Now:
As low as
Was:
**A 2018 OWL AWARD SHORTLIST WINNER IN THE POLITICS & CURRENT EVENTS CATEGORY**THE INSIDE STORY ON PRESIDENT TRUMP, AS ONLY BOB WOODWARD CAN TELL IT With authoritative reporting honed through...