Spaceman (Adapted for Young Readers): The True Story of a Young Boy's Journey to Becoming an Astronaut 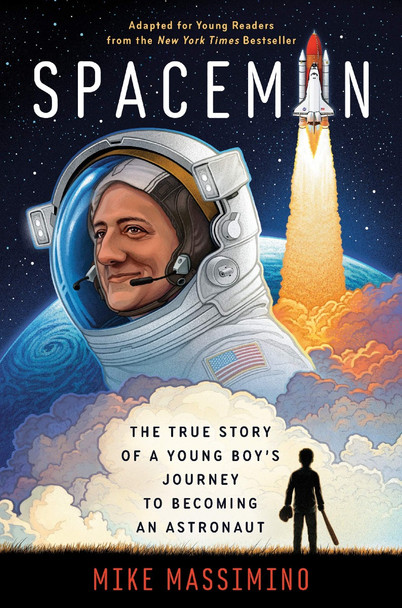 Spaceman (Adapted for Young Readers): The True Story of a Young Boy's Journey to Becoming an Astronaut

An astronaut who completed spacewalks on two Hubble missions tells his inspiring story in this middle grade adaptation of the bestselling adult memoir, Spaceman: An Astronaut's Unlikely Journey to Unlock the Secrets of the Universe.

From the time he was seven-years-old and saw Apollo 11 land on the moon, Mike Massimino dreamed of becoming an astronaut. Long Island is a long way from space. Kids like him, growing up in working-class families, seldom left the neighborhood. But with the encouragement of teachers and mentors, Mike ventured down on a path that took him to Columbia University and to MIT. It wasn't easy. There were academic setbacks and disappointments aplenty--and NASA turned him down three times. Still, Mike never gave up. He rose to each challenge and forged ahead, inching closer to realizing his boyhood dream. His love of science and space, along with his indomitable spirit and sense of teamwork eventually got him assigned to two missions to fix the Hubble Space Telescope--as a spacewalker.

Spaceman takes readers on Mike's unlikely ride from Earth to space, showing the breathtaking wonder of science and technology along the way.

"Mike Massimino is a spaceman through and through. In this edition for young people, he tells us how hard work can take you out of this world. He believes in teamwork, and he never gives up. Prepare to be inspired." --BILL NYE, SCIENCE GUY and CEO, THE PLANETARY SOCIETY

The book, Spaceman (Adapted for Young Readers): The True Story of a Young Boy's Journey to Becoming an Astronaut [Bulk, Wholesale, Quantity] ISBN# 9780593120866 in Hardcover by Mike Massimino may be ordered in bulk quantities. Minimum starts at 25 copies. Availability based on publisher status and quantity being ordered.
View AllClose

MSRP:
Now:
As low as
Was:
The #1 New York Times bestseller with over two million copies in print, now available for a whole new generation of Portis fans with discussion questions True Grit tells the story of Mattie Ross, who...

Just Mercy (Adapted for Young Adults): A True Story of the Fight for Justice

MSRP:
Now:
As low as
Was:
In this young adult adaptation of the acclaimed bestseller Just Mercy, which the New York Times calls "as compelling as To Kill a Mockingbird, and in some ways more so," Bryan Stevenson delves deep...

Call Me American (Adapted for Young Adults): The Extraordinary True Story of a Young Somali Immigrant

MSRP:
Now:
As low as
Was:
Adapted from the adult memoir, this gripping story follows one boy's journey into young adulthood and offers an intimate account of modern immigration. Abdi Nor Iftin grew up amidst a blend of...

Just Mercy (Adapted for Young Adults): A True Story of the Fight for Justice [Paperback]

MSRP:
Now:
As low as
Was:
In this young adult adaptation of the acclaimed bestselling Just Mercy, which the New York Times describes as "as compelling as To Kill a Mockingbird, and in some ways, more so," one of the most...

Your Time to Thrive: End Burnout, Increase Well-Being, and Unlock Your Full Potential with the New Science of Microsteps

MSRP:
Now:
As low as
Was:
Live the life you want, not the life you settle for. Helping people build healthy new habits that improve their lives is more important than ever. Arianna Huffington launched Thrive Global to do...

MSRP:
Now:
As low as
Was:
A look inside the personal life of every first lady in American history, based on original interviews with major historians. C-SPAN's yearlong history series, First Ladies: Influence and Image,...

MSRP:
Now:
As low as
Was:
The Shadow Club starts simply enough: the kids who are tired of being second-best get together and, for the first time, talk about how they feel. But soon the members decide to play practical jokes...

MSRP:
Now:
As low as
Was:
**A 2020 OWL AWARD SHORTLIST WINNER IN THE SALES & MARKETING CATEGORY**And, just like that, everything changed. A global pandemic. Panic. Social distancing. Working from home. Suddenly, virtual...

Not a Fan Daily Devotional: 75 Days to Becoming a Completely Committed Follower of Jesus

MSRP:
Now:
As low as
Was:
Featuring all new content building on the mega bestseller Not a Fan, author and pastor Kyle Idleman dives deep into each of his principles from the original book and helps you see how you can live...

Radical Belonging: How to Survive and Thrive in an Unjust World (While Transforming It for the Better)

MSRP:
Now:
As low as
Was:
"Belonging has been a formative struggle for me. Like most people with marginalized identities, my experience as a trans person has taught me that it's hard to be yourself and feel like you belong in...

Gene Eating: The Science of Obesity and the Truth about Dieting

MSRP:
Now:
As low as
Was:
An indispensable, groundbreaking look at the way our genetic makeup influences our relationship with food. In an age of misinformation and pseudo-science, the world is getting fatter and the diet...