Speaker for the Dead (Ender Saga #2) 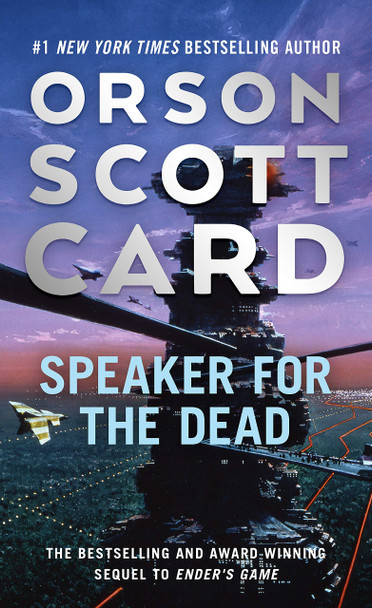 Speaker for the Dead (Ender Saga #2)

MSRP:
Now: List Price $7.99
Was:
— You save
Mass Market Paperbound
This product qualifies for FREE US Ground Shipping on orders over $100.

In the aftermath of his terrible war, Ender Wiggin disappeared, and a powerful voice arose: The Speaker for the Dead, who told the true story of the Bugger War.

Now, long years later, a second alien race has been discovered, but again the aliens' ways are strange and frightening...again, humans die. And it is only the Speaker for the Dead, who is also Ender Wiggin the Xenocide, who has the courage to confront the mystery...and the truth.

The book, Speaker for the Dead (Ender Saga #2) [Bulk, Wholesale, Quantity] ISBN# 9781250773050 in Mass Market Paperbound by Orson Scott Card may be ordered in bulk quantities. Minimum starts at 25 copies. Availability based on publisher status and quantity being ordered.
View AllClose

MSRP:
Now:
As low as
Was:
The war for survival of the planet Lusitania will be fought in the heart of a child named Gloriously Bright. On Lusitania, Ender found a world where humans and pequininos and the Hive Queen could...

Children of the Mind (Ender Quintet #4)

MSRP:
Now:
As low as
Was:
Children of the Mind is the fourth book in New York Times bestslling author Orson Scott Card's classic science fiction The Ender Saga--newly repackaged. The planet Lusitania is home to three...

MSRP:
Now:
As low as
Was:
After twenty-three years, Orson Scott Card returns to his acclaimed bestselling series with the first true, direct sequel to the classic Ender's Game. In Ender's Game, the world's most gifted...

MSRP:
Now:
As low as
Was:
Alyssa Milano’s sharply observed, uproarious, and deeply intimate ode to the life she has lived and the issues that matter most. Alyssa Milano, actress and activist, delivers here a collection of...

Do What Makes Your Soul Shine: Inspiring Quotes to Help You Live Your Best Life

MSRP:
Now:
As low as
Was:
This book is brimming with uplifting quotes and motivational statements to inspire the reader to follow their hearts and go after their dreams You’re at your best when you’re doing what you love,...

MSRP:
Now:
As low as
Was:
Can’t get enough of those crunchy kernels? Inspired by movie marathons and midnight snacks, this collapsible popcorn bowl provides the immediate satisfaction of microwave popcorn in an...

Babalawo: The Secrets of Afro-Cuban Ifa

MSRP:
Now:
As low as
Was:
Cuban Ifá From An Insider Hidden within the mysterious Afro-Cuban religion of Santería, also known as Lucumí, there is a deep body of secrets and rituals called Ifá. This book pulls away the veil...

MSRP:
Now:
As low as
Was:
Machiavelli's highly influential treatise on political power The Prince shocked Europe on publication with its advocacy of ruthless tactics for gaining absolute power and its abandonment of...

MSRP:
Now:
As low as
Was:
The second of L. Frank Baum's Oz books, this grand adventure reunites the Scarecrow, Tin Woodsman, and Glinda the Good Witch as they battle a revolution in the Emerald City. A lively crew of new...

Norma Kamali I Am Invincible

MSRP:
Now:
As low as
Was:
Wit and wisdom from the innovative, influential, and empowering wellness guru and designer Norma Kamali In her first book, fashion legend Norma Kamali offers readers a stylish, inspiring, and...