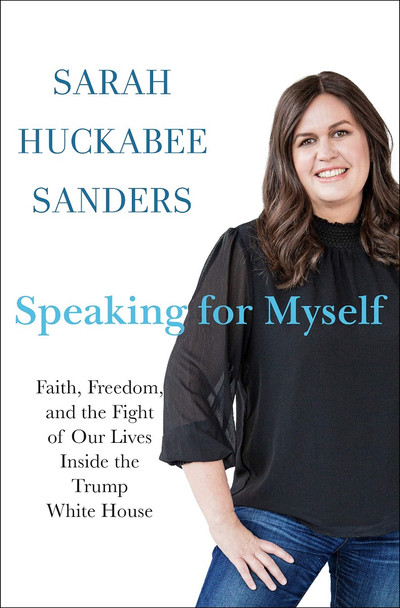 A candid, riveting account of the Trump White House, on the front lines and behind the scenes.

Sarah Huckabee Sanders served as White House Press Secretary for President Donald J. Trump from 2017 to 2019. A trusted confidante of the President, Sanders advised him on everything from press and communications strategy to personnel and policy. She was at the President’s side for two and a half years, battling with the media, working with lawmakers and CEOs, and accompanying the President on every international trip, including dozens of meetings with foreign leaders―all while unfailingly exhibiting grace under pressure. Upon her departure from the administration, President Trump described Sarah as “irreplaceable,” a “warrior” and “very special person with extraordinary talents, who has done an incredible job.”

Now, in Speaking for Myself, Sarah Huckabee Sanders describes what it was like on the front lines and inside the White House, discussing her faith, the challenges of being a working mother at the highest level of American politics, her relationship with the press, and her unique role in the historic fight raging between the Trump administration and its critics for the future of our country.

This frank, revealing, and engaging memoir will offer a truly unique perspective on the most important issues and events of the era, and unprecedented access to both public and behind-the-scenes conversations within the Trump White House.

The book, Speaking for Myself: Faith, Freedom, and the Fight of Our Lives Inside the Trump White House [Bulk, Wholesale, Quantity] ISBN# 9781250271334 in Hardcover by Sarah Huckabee Sanders may be ordered in bulk quantities. Minimum starts at 25 copies. Availability based on publisher status and quantity being ordered.
View AllClose

How We Fight for Our Lives: A Memoir

MSRP:
Now:
As low as
Was:
“People don’t just happen,” writes Saeed Jones. “We sacrifice former versions of ourselves. We sacrifice the people who dared to raise us. The ‘I’ it seems doesn’t exist until we are able to say, ‘I...

Unsung America: Immigrant Trailblazers and Our Fight for Freedom

MSRP:
Now:
As low as
Was:
Immigration Stories–A Fight for Justice and Freedom. If you liked The Book of Awesome Women by Becca Anderson, Dear America by Jose Antonio Vargas, or American Like Me: Reflections on Life Between...

Truth in Our Times: Inside the Fight for Press Freedom in the Age of Alternative Facts [Hardcover]

MSRP:
Now:
As low as
Was:
David E. McCraw recounts his experiences as the top newsroom lawyer for the New York Times during the most turbulent era for journalism in generations. In October 2016, when Donald Trump's lawyer...

MSRP:
Now:
As low as
Was:
The #1 New York Times bestseller, Cujo “hits the jugular” (The New York Times) with the story of a friendly Saint Bernard that is bitten by a bat. Get ready to meet the most hideous menace ever to...

Be a Circle Maker: The Solution to 10,000 Problems [Paperback]

China Road: A Journey into the Future of a Rising Power [Paperback]

MSRP:
Now:
As low as
Was:
Route 312 is the Chinese Route 66. It flows three thousand miles from east to west, passing through the factory towns of the coastal areas, through the rural heart of China, then up into the Gobi...

MSRP:
Now:
As low as
Was:
Poor Big Al! He just wants to make friends. And in the whole wide blue sea you can't find a nicer fish. But because Big Al is large and scary-looking, the little fish are afraid to get to know him...

MSRP:
Now:
As low as
Was:
A classic church standard perfect for any church’s sanctuary or member’s home. The Pew Bible has long been a trusted Bible for churches and homes. Durable for years of service, the Pew Bible now...

Lessons from Lucy: The Simple Joys of an Old, Happy Dog

MSRP:
Now:
As low as
Was:
As Dave Barry turns seventy—not happily—he realizes that his dog, Lucy, is dealing with old age far better than he is. She has more friends, fewer worries, and way more fun. So Dave decides to figure...