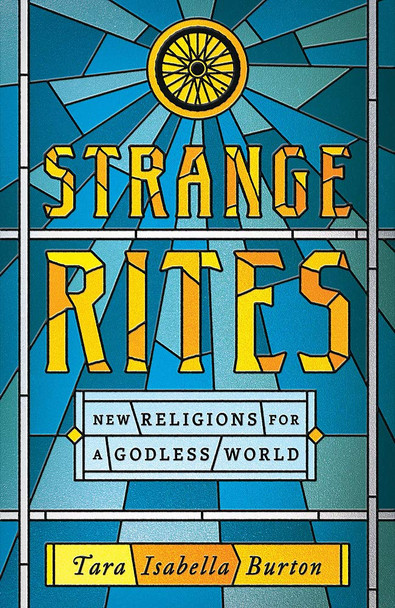 **A 2020 OWL AWARD LONGLIST WINNER IN THE RELIGION CATEGORY**

A sparklingly strange odyssey through the kaleidoscope of America's new spirituality: the cults, practices, high priests and prophets of our supposedly post-religion age.

Fifty-five years have passed since the cover of Time magazine proclaimed the death of God and while participation in mainstream religion has indeed plummeted, Americans have never been more spiritually busy.

While rejecting traditional worship in unprecedented numbers, today's Americans are embracing a kaleidoscopic panoply of spiritual traditions, rituals, and subcultures -- from astrology and witchcraft to SoulCycle and the alt-right. As the Internet makes it ever-easier to find new "tribes," and consumer capitalism forever threatens to turn spirituality into a lifestyle brand, remarkably modern American religious culture is undergoing a revival comparable with the Great Awakenings of centuries past. Faith is experiencing not a decline but a Renaissance. Disillusioned with organized religion and political establishments alike, more and more Americans are seeking out spiritual paths driven by intuition, not institutions.

In Strange Rites, religious scholar and commentator Tara Isabella Burton visits with the techno-utopians of Silicon Valley; Satanists and polyamorous communities, witches from Bushwick, wellness junkies and social justice activists and devotees of Jordan Peterson, proving Americans are not abandoning religion but remixing it. In search of the deep and the real, they are finding meaning, purpose, ritual, and communities in ever-newer, ever-stranger ways.

The book, Strange Rites: New Religions for a Godless World [Bulk, Wholesale, Quantity] ISBN# 9781541762534 in Hardcover by Tara Isabella Burton may be ordered in bulk quantities. Minimum starts at 25 copies. Availability based on publisher status and quantity being ordered.

One World, Many Religions: The Ways We Worship

MSRP:
Now:
As low as
Was:
Religious understanding is as important today than any other time in history. In this highly acclaimed book, Mary Pope Osborne introduces readers to the six major religions of the world. One World,...

The Triumph of Christianity: How a Forbidden Religion Swept the World

MSRP:
Now:
As low as
Was:
The “marvelous” (Reza Aslan, bestselling author of Zealot), New York Times bestselling story of how Christianity became the dominant religion in the West. How did a religion whose first believers...

Strangers in a Strange Land: Living the Catholic Faith in a Post-Christian World

MSRP:
Now:
As low as
Was:
A vivid critique of American life today and a guide to how Christians―and particularly Catholics--can live their faith vigorously, and even with hope, in a post-Christian public square. From Charles...

MSRP:
Now:
As low as
Was:
"Aldous Huxley is the greatest 20th century writer in English." —Chicago Tribune Aldous Huxley is rightly considered a prophetic genius and one of the most important literary and philosophical voices...

What Is Religion? (Our Multicultural World)

MSRP:
Now:
As low as
Was:
Religion is the belief in a power greater than oneself. Many people call this power God. This insightful book introduces children to the world’s great religions: Christianity, Judaism, Islam,...

MSRP:
Now:
As low as
Was:
This is Edmond Rostand's immortal play in which chivalry and wit, bravery and love are forever captured in the timeless spirit of romance. Set in Louis XIII's reign, it is the moving and exciting...

And the Good News Is...: Lessons and Advice from the Bright Side

MSRP:
Now:
As low as
Was:
#1 New York Times Bestseller #1 Wall Street Journal Bestseller From her years as the presidential press secretary to her debates with colleagues on Fox News' The Five, Dana Perino reveals the lessons...

MSRP:
Now:
As low as
Was:
Celebrate the 25th anniversary of the Dogfish Head Craft Brewery with this rich, adventurous history The Dogfish Head Book: 25 Years of Off-Centered Adventures celebrates a quarter-century in...

Divorcing the House: A Guide to Understanding Your Options, the Pitfalls & Whether You Could-Or Should-Keep Your Home in Divorce

MSRP:
Now:
As low as
Was:
Day Trading and Swing Trading the Currency Market gives forex traders the strategies and skills they need to approach this highly competitive arena on an equal footing with major institutions. Now in...

Stuff You Should Know: An Incomplete Compendium of Mostly Interesting Things

MSRP:
Now:
As low as
Was:
From the duo behind the massively successful and award-winning podcast Stuff You Should Know comes an unexpected look at things you thought you knew. Josh Clark and Chuck Bryant started the podcast...

MSRP:
Now:
As low as
Was:
Did you know that rain, waves, wind, snow, and ice can change the shape of Earth’s surface? They can create valleys, sea stacks, caves, and rock arches. Learn about the natural forces of erosion and...

MSRP:
Now:
As low as
Was:
From the author-illustrator of The Book of Mistakes comes a gorgeous picture book about caring for your own heart and living with kindness and empathy. My heart is a window. My heart is a slide. My...