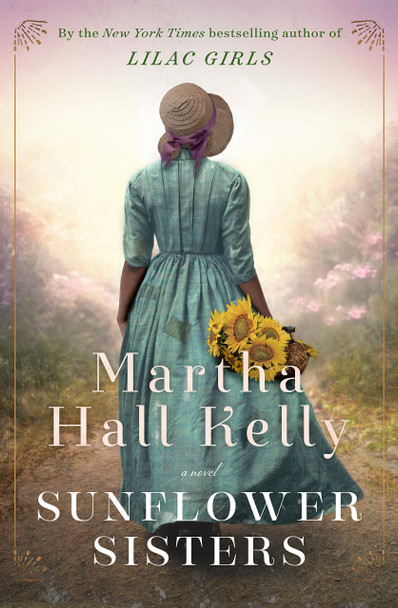 This title is available for pre-order and will be processed on Mar 30th 2021 for shipment.

Martha Hall Kelly’s million-copy bestseller Lilac Girls introduced readers to Caroline Ferriday. Now, in Sunflower Sisters, Kelly tells the story of Ferriday’s ancestor Georgeanna Woolsey, a Union nurse during the Civil War whose calling leads her to cross paths with Jemma, a young enslaved girl who is sold off and conscripted into the army, and Anne-May Wilson, a Southern plantation mistress whose husband enlists.

“An exquisite tapestry of women determined to defy the molds the world has for them.”—Lisa Wingate, #1 New York Times bestselling author of Before We Were Yours

Georgeanna “Georgey” Woolsey isn’t meant for the world of lavish parties and the demure attitudes of women of her stature. So when war ignites the nation, Georgey follows her passion for nursing during a time when doctors considered women on the battlefront a bother. In proving them wrong, she and her sister Eliza venture from New York to Washington, D.C., to Gettysburg and witness the unparalleled horrors of slavery as they become involved in the war effort.

In the South, Jemma is enslaved on the Peeler Plantation in Maryland, where she lives with her mother and father. Her sister, Patience, is enslaved on the plantation next door, and both live in fear of LeBaron, an abusive overseer who tracks their every move. When Jemma is sold by the cruel plantation mistress Anne-May at the same time the Union army comes through, she sees a chance to finally escape—but only by abandoning the family she loves.

Anne-May is left behind to run Peeler Plantation when her husband joins the Union army and her cherished brother enlists with the Confederates. In charge of the household, she uses the opportunity to follow her own ambitions and is drawn into a secret Southern network of spies, finally exposing herself to the fate she deserves.

Inspired by true accounts, Sunflower Sisters provides a vivid, detailed look at the Civil War experience, from the barbaric and inhumane plantations, to a war-torn New York City, to the horrors of the battlefield. It’s a sweeping story of women caught in a country on the brink of collapse, in a society grappling with nationalism and unthinkable racial cruelty, a story still so relevant today.

The book, Sunflower Sisters [Bulk, Wholesale, Quantity] ISBN# 9781524796402 in Hardcover by Martha Hall Kelly may be ordered in bulk quantities. Minimum starts at 25 copies. Availability based on publisher status and quantity being ordered.
View AllClose

MSRP:
Now:
As low as
Was:
Raina Telgemeier’s #1 New York Times bestselling, Eisner Award-winning companion to Smile! Raina can't wait to be a big sister. But once Amara is born, things aren't quite how she expected them to be...

MSRP:
Now:
As low as
Was:
From a Booker Prize finalist and international literary star: a blazing portrait of one darkly riveting sibling relationship, from the inside out. "One of her generation's most intriguing authors"...

MSRP:
Now:
As low as
Was:
All Allie Marshall wants is a fresh start. But when dark secrets refuse to stay buried, will her chance at a new life be shattered forever? Convicted of a crime she didn’t commit, Allie watched a...

MSRP:
Now:
As low as
Was:
A charming tale about inventive children who plant some summer fun. The book, Sunflower House [Bulk, Wholesale, Quantity] ISBN# 9780152019525 in Paperback by Bunting, Eve may be ordered in bulk...

MSRP:
Now:
As low as
Was:
Haudenosaunee (Iroquois) Influence on Early American Feminists. Recounts, with documentation, the influence of the Iroquois model of freedom on women's early struggle for freedom and equality in the...

MSRP:
Now:
As low as
Was:
An enlarged edition of Thomas Sowell's brilliant examination of the origins of economic disparities Economic and other outcomes differ vastly among individuals, groups, and nations. Many...

Winning: The Unforgiving Race to Greatness

MSRP:
Now:
As low as
Was:
From the elite performance coach for Michael Jordan, Kobe Bryant, Dwyane Wade, and many others—and the author of the powerful bestseller Relentless—a no-holds-barred formula for winning that is ideal...

MSRP:
Now:
As low as
Was:
A NEW YORK TIMES NOTABLE BOOK OF 2020 NAMED A BEST BOOK OF THE YEAR BY * THE WASHINGTON POST * THE ECONOMIST * NEW SCIENTIST * PUBLISHERS WEEKLY * THE GUARDIAN From one of the most dynamic rising...

MSRP:
Now:
As low as
Was:
Installing agile tools and practices won't be enough to respond to rapid market change unless you lay the groundwork with six key enabling factors, identified by the United Kingdom's leading agile...