Superbetter: A Revolutionary Approach to Getting Stronger, Happier, Braver and More Resilient--Powered by the Science of Games 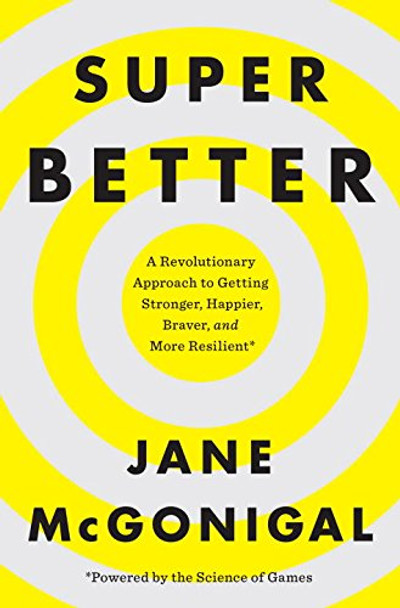 Superbetter: A Revolutionary Approach to Getting Stronger, Happier, Braver and More Resilient--Powered by the Science of Games

An innovative guide to living gamefully, based on the program that has already helped nearly half a million people achieve remarkable personal growth In 2009, internationally renowned game designer Jane McGonigal suffered a severe concussion. Unable to think clearly or work or even get out of bed, she became anxious and depressed, even suicidal. But rather than let herself sink further, she decided to get better by doing what she does best: she turned her recovery process into a resilience-building game. What started as a simple motivational exercise quickly became a set of rules for “post-traumatic growth” that she shared on her blog. These rules led to a digital game and a major research study with the National Institutes of Health. Today nearly half a million people have played SuperBetter to get stronger, happier, and healthier. But the life-changing ideas behind SuperBetter are much bigger than just one game. In this book, McGonigal reveals a decade’s worth of scientific research into the ways all games—including videogames, sports, and puzzles—change how we respond to stress, challenge, and pain. She explains how we can cultivate new powers of recovery and resilience in everyday life simply by adopting a more “gameful” mind-set. Being gameful means bringing the same psychological strengths we naturally display when we play games—such as optimism, creativity, courage, and determination—to real-world goals. Drawing on hundreds of studies, McGonigal shows that getting superbetter is as simple as tapping into the three core psychological strengths that games help you build: • Your ability to control your attention, and therefore your thoughts and feelings • Your power to turn anyone into a potential ally, and to strengthen your existing relationships • Your natural capacity to motivate yourself and super-charge your heroic qualities, like willpower, compassion, and determination SuperBetter contains nearly 100 playful challenges anyone can undertake in order to build these gameful strengths. It includes stories and data from people who have used the SuperBetter method to get stronger in the face of illness, injury, and other major setbacks, as well as to achieve goals like losing weight, running a marathon, and finding a new job. As inspiring as it is down to earth, and grounded in rigorous research, SuperBetter is a proven game plan for a better life. You’ll never say that something is “just a game” again.

The book, Superbetter: A Revolutionary Approach to Getting Stronger, Happier, Braver and More Resilient--Powered by the Science of Games [Bulk, Wholesale, Quantity] ISBN# 9781594206368 in Hardcover by McGonigal, Jane may be ordered in bulk quantities. Minimum starts at 25 copies. Availability based on publisher status and quantity being ordered.
View AllClose

Just Feel: How to Be Stronger, Happier, Healthier, and More

MSRP:
Now:
As low as
Was:
Featuring full-color illustrations, Just Feel is an engaging and easy-to-read guide that introduces kids to the building blocks of resilience and grit. The U.S. and other nations are quickly becoming...

Anxiety: The Missing Stage of Grief: A Revolutionary Approach to Understanding and Healing the Impact of Loss

MSRP:
Now:
As low as
Was:
A groundbreaking book exploring the little-known yet critical connections between anxiety and grief, with practical strategies for healing, following the renowned Kübler-Ross stages model If you're...

MSRP:
Now:
As low as
Was:
"Your customers are only satisfied because their expectations are so low and because no one else is doing better. Just having satisfied customers isn't good enough anymore. If you really want a...

Fulfilled: How the Science of Spirituality Can Help You Live a Happier, More Meaningful Life

MSRP:
Now:
As low as
Was:
Are you living the life you thought you always wanted but feel that something is still missing? Do you think you should be happier than you are, considering all that you have? Have you achieved your...

MSRP:
Now:
As low as
Was:
Groundbreaking book by the Nobel Prize Winner who discovered telomeres, telomerase, and their role in the aging process, and the psychologist who researched specific lifestyle habits to protect them...