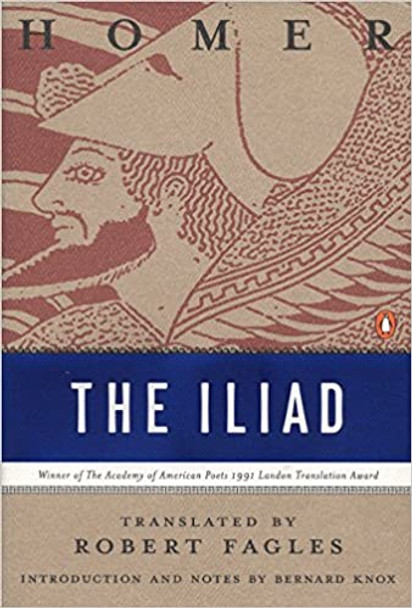 MSRP:
Now: List Price $20.00
Was:
— You save
Paperback
This product qualifies for FREE US Ground Shipping on orders over $100.

The great war epic of Western literature, translated by acclaimed classicist Robert Fagles, and featured in the Netflix series The OA

Dating to the ninth century B.C., Homer's timeless poem still vividly conveys the horror and heroism of men and gods wrestling with towering emotions and battling amidst devastation and destruction, as it moves inexorably to the wrenching, tragic conclusion of the Trojan War. Renowned classicist Bernard Knox observes in his superb introduction that although the violence of the Iliad is grim and relentless, it coexists with both images of civilized life and a poignant yearning for peace.

Combining the skills of a poet and scholar, Robert Fagles, winner of the PEN/Ralph Manheim Medal for Translation and a 1996 Academy Award in Literature from the American Academy of Arts and Letters, brings the energy of contemporary language to this enduring heroic epic. He maintains the drive and metric music of Homer's poetry, and evokes the impact and nuance of the Iliad's mesmerizing repeated phrases in what Peter Levi calls "an astonishing performance."

For more than seventy years, Penguin has been the leading publisher of classic literature in the English-speaking world. With more than 1,700 titles, Penguin Classics represents a global bookshelf of the best works throughout history and across genres and disciplines. Readers trust the series to provide authoritative texts enhanced by introductions and notes by distinguished scholars and contemporary authors, as well as up-to-date translations by award-winning translators.

The book, The Iliad (Penguin Classics Deluxe Edition) [Bulk, Wholesale, Quantity] ISBN# 9780140275360 in Paperback by Homer;Robert Fagles (Translator);Bernard Knox (Introduction by) may be ordered in bulk quantities. Minimum starts at 25 copies. Availability based on publisher status and quantity being ordered.
View AllClose

MSRP:
Now:
As low as
Was:
William Golding’s unforgettable classic of boyhood adventure and the savagery of humanity comes to Penguin Classics in a stunning Graphic Deluxe Edition with a new foreword by Lois Lowry As...

MSRP:
Now:
As low as
Was:
From the award-winning translator of The Iliad and The Odyssey comes a brilliant new translation of Virgil's great epic Fleeing the ashes of Troy, Aeneas, Achilles’ mighty foe in the Iliad, begins...

The Old Man and the Sea [Paperback]

MSRP:
Now:
As low as
Was:
As one of the most acclaimed and well-known authors, Ernest Hemingway’s The Old Man and The Sea is one of his most admired works. Within its 128 pages is an epic narrative of struggle, conflict and...

MSRP:
Now:
As low as
Was:
The book, The Book Thief [ Bulk Wholesale Quantity ] ISBN 375842209 in by Zusak, Markus may be ordered in bulk quantities . Bulk book availability based on publisher status and quantity being ordered...

MSRP:
Now:
As low as
Was:
From the acclaimed author-illustrator of A Book of Sleep comes a silly tale about a garden rivalry, a giant carrot and bunnies in construction vehicles! When two rabbits find a giant carrot growing...

My Mouth Is a Volcano!

How to Get Ahead: A Proven 6-Step System to Unleash Your Personal Brand and Build a World-Class Network So Opportunities Come to You

MSRP:
Now:
As low as
Was:
Turbocharge your professional success and accelerate your career. This practical guide cuts the fluff and gives you real, tangible, actionable steps you can take to build your own world-class...

Dark Horse: Achieving Success Through the Pursuit of Fulfillment [Paperback]

MSRP:
Now:
As low as
Was:
For generations, we've been stuck with a cookie-cutter mold for success that requires us to be the same as everyone else, only better. This "standard formula" works for some people but leaves most of...