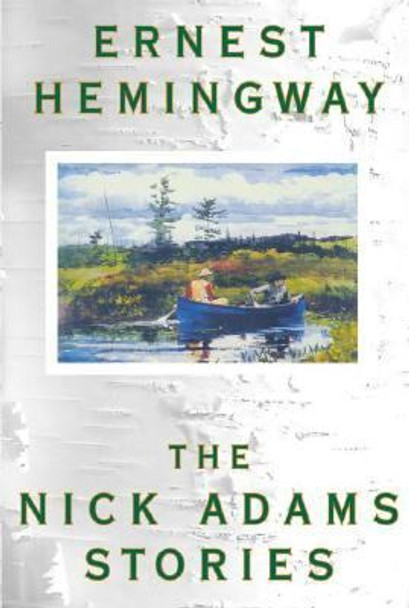 From one of the 20th century's greatest voices comes the complete volume of his short stories featuring Nick Adams, Ernest Hemingway's memorable character, as he grows from child to adolescent to soldier, veteran, writer, and parent—a sequence closely paralleling the events of Hemingway's life. The complete collection of Ernest Hemingway's Nick Adams two dozen stories are gathered here in one volume, grouped together according to the major time periods in the protagonist's life. Based on Hemingway's own experieces as a boy and as a member of the Red Cross ambulance corps in World War I. The collection follows Nick's life as a child to parent, along with soldier, veteran, and writer and feature some of Hemingway's earliest work such as "Indian Camp" and some of his best known short stories, including "Big Two-Hearted River." Perfect for longtime Hemingway fans and as an introduction to one of America's most famous writers.

The book, The Nick Adams Stories [Bulk, Wholesale, Quantity] ISBN# 9780684169408 in Paperback by Hemingway, Ernest may be ordered in bulk quantities. Minimum starts at 25 copies. Availability based on publisher status and quantity being ordered.
View AllClose

MSRP:
Now:
As low as
Was:
A revealing look at the true beginning of American politics Until recently rescued by David McCullough, John Adams has always been overshadowed by Washington and Jefferson. Volatile, impulsive,...

MSRP:
Now:
As low as
Was:
Just filmed by David Mamet, starring Nigel Hawthorne and Jeremy Northam, The Winslow Boy is based on the real-life court case of a young naval cadet unjustly accused of stealing a five shilling...

MSRP:
Now:
As low as
Was:
The Pulitzer Prize–winning, bestselling biography of America’s founding father and second president that was the basis for the acclaimed HBO series, brilliantly told by master historian David...

Adam of the Road

MSRP:
Now:
As low as
Was:
A Newbery Medal Winner Awarded the John Newbery Medal as "the most distinguished contribution to American literature for children" in the year of its publication. "A road's a kind of holy thing,"...

MSRP:
Now:
As low as
Was:
Critically acclaimed novelist Michael Farris Smith pulls Nick Carraway out of the shadows and into the spotlight in this "masterful" look into his life before Gatsby (Richard Russo, Pulitzer...

MSRP:
Now:
As low as
Was:
The epic tale of Odysseus’s journey home – one of the earliest and greatest works of Western literature If the Iliad is the world's greatest war epic, the Odyssey is literature's grandest evocation...

The Startup Owner's Manual: The Step-By-Step Guide for Building a Great Company [Hardcover]

MSRP:
Now:
As low as
Was:
More than 100,000 entrepreneurs rely on this book for detailed, step-by-step instructions on building successful, scalable, profitable startups. The National Science Foundation pays hundreds of...

MSRP:
Now:
As low as
Was:
Beware of Helen... Heather is such a whiny little brat. Always getting Michael and me into trouble. But since our mother married her father, we're stuck with her...our "poor stepsister" who lost her...

Borreguita and the Coyote [Paperback]

MSRP:
Now:
As low as
Was:
What's a little lamb to do about a fierce coyote that wants to eat her? Why, trick him, of course...and and trick him again...and trick him one more time! Here's a lively retelling of a Mexican folk...

MSRP:
Now:
As low as
Was:
Most startups fail. But many of those failures are preventable. The Lean Startup is a new approach being adopted across the globe, changing the way companies are built and new products are launched...