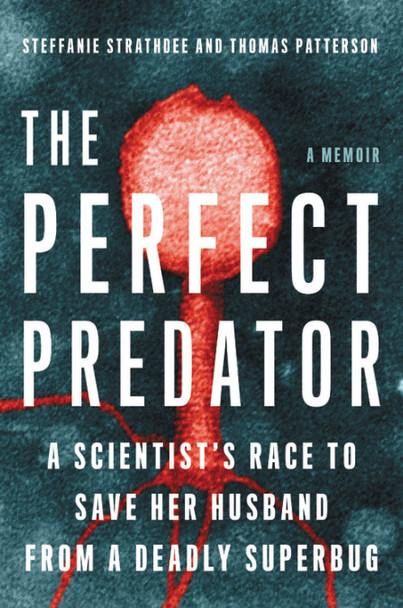 A "fascinating and terrifying" memoir of one woman's extraordinary effort to save her husband's life (Scientific American) -- and the discovery of a forgotten cure that has the potential to save millions more.

Epidemiologist Steffanie Strathdee and her husband, psychologist Tom Patterson, were vacationing in Egypt when Tom came down with a stomach bug. What at first seemed like a case of food poisoning quickly turned critical, and by the time Tom had been transferred via emergency medevac to the world-class medical center at UC San Diego, where both he and Steffanie worked, blood work revealed why modern medicine was failing: Tom was fighting one of the most dangerous, antibiotic-resistant bacteria in the world.

Frantic, Steffanie combed through research old and new and came across phage therapy: the idea that the right virus, aka "the perfect predator," can kill even the most lethal bacteria. Phage treatment had fallen out of favor almost 100 years ago, after antibiotic use went mainstream. Now, with time running out, Steffanie appealed to phage researchers all over the world for help. She found allies at the FDA, researchers from Texas A&M, and a clandestine Navy biomedical center -- and together they resurrected a forgotten cure.

A nail-biting medical mystery, The Perfect Predator is a story of love and survival against all odds, and the (re)discovery of a powerful new weapon in the global superbug crisis.

The book, The Perfect Predator: A Scientist's Race to Save Her Husband from a Deadly Superbug: A Memoir [Bulk, Wholesale, Quantity] ISBN# 9780316418119 in Paperback by Steffanie Strathdee; Thomas Patterson; Teresa Barker (With) may be ordered in bulk quantities. Minimum starts at 25 copies. Availability based on publisher status and quantity being ordered.
View AllClose

The Race to Save the Lord God Bird

MSRP:
Now:
As low as
Was:
The tragedy of extinction is explained through the dramatic story of a legendary bird, the Ivory-billed Woodpecker, and of those who tried to possess it, paint it, shoot it, sell it, and, in a...

Superbugs: The Race to Stop an Epidemic

MSRP:
Now:
As low as
Was:
"An amazing, informative book that changes our perspective on medicine, microbes and our future." --Siddhartha Mukherjee, MD, New York Times bestselling author of The Emperor of All Maladies A New...

The Perfect Predator: A Scientist's Race to Save Her Husband from a Deadly Superbug: A Memoir

MSRP:
Now:
As low as
Was:
Epidemiologist Steffanie Strathdee and her husband, psychologist Tom Patterson, were vacationing in Egypt when Tom came down with a stomach bug. What at first seemed like a case of food poisoning...

Save Me the Plums: My Gourmet Memoir

MSRP:
Now:
As low as
Was:
Trailblazing food writer and beloved restaurant critic Ruth Reichl took the job (and the risk) of a lifetime when she entered the glamorous, high-stakes world of magazine publishing. Now, for the...

The Book Smugglers: Partisans, Poets, and the Race to Save Jewish Treasures from the Nazis

MSRP:
Now:
As low as
Was:
The Book Smugglers is the nearly unbelievable story of ghetto residents who rescued thousands of rare books and manuscripts―first from the Nazis and then from the Soviets―by hiding them on their...

MSRP:
Now:
As low as
Was:
People with disabilities forging the newest and last human rights movement of the century. The book, No Pity: People with Disabilities Forging a New Civil Rights Movement [Bulk, Wholesale, Quantity]...

MSRP:
Now:
As low as
Was:
With the stroke of a pen, the president of the United States can proclaim a national monument. The Antiquities Act of 1906 was enacted to provide an expedited means to protect areas of natural or...

Their Eyes Were Watching God [Paperback]

MSRP:
Now:
As low as
Was:
While Zora Heale Hurston’s novel now receives critical claim and is considered a classic of the African American literature canon, Their Eyes Were Watching God was not well received upon its initial...

The Tender Bar: A Memoir

MSRP:
Now:
As low as
Was:
Soon to be a major Amazon film directed by George Clooney and starring Ben Affleck, Tye Sheridan, Lily Rabe, and Christopher Lloyd, a raucous, poignant, luminously written memoir about a boy striving...

A Killer by Design: Murderers, Mindhunters, and My Quest to Decipher the Criminal Mind

MSRP:
Now:
As low as
Was:
A vivid behind-the-scenes look into the creation of the FBI's Behavioral Science Unit and the evolution of criminal profiling, written by the pioneering forensic nurse who transformed the way the FBI...