The Rock: Through the Lens: His Life, His Movies, His World [Hardcover] 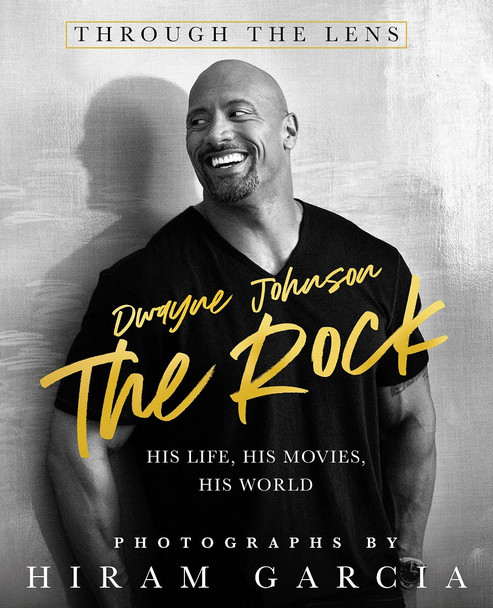 The Rock: Through the Lens: His Life, His Movies, His World [Hardcover]

Dynamic, funny, and inspiring photos of global entertainment icon, entrepreneur, and trailblazer, Dwayne "The Rock" Johnson, featuring twenty years' worth of candids, family moments, and snapshots from film and television sets, many never-before-seen.

Hiram Garcia, who has known Dwayne Johnson since college, is a longtime collaborator, producing partner, and talented photographer. As a film and television producer as well as in his role as the President of Production at Seven Bucks Productions, Garcia has unprecedented access to capture images on the sets of Seven Bucks’ films including such blockbuster hits as Jumanji: The Next Level, Jungle Cruise, Fast and Furious Presents: Hobbs & Shaw, and more.

As one of his closest friends, Garcia knows Johnson inside and out, and that deep relationship informs the photographs he shares in this book. Whether it’s an action-packed photo snapped during an intense film take, or a relaxed and candid shot of Johnson with his daughters, Garcia focuses his lens on the qualities he most admires in his friend: his extraordinary work ethic, his infectious smile, his empathy and sense of humor, and the joy and determination Johnson brings to everything he does.

With scores of photos―most of them never been seen before and taken over two decades―The Rock: Through the Lens: His Life, His Movies, His World is enhanced by captions revealing the inside stories behind these remarkable images.

The book, The Rock: Through the Lens: His Life, His Movies, His World [Bulk, Wholesale, Quantity] ISBN# 9781250220424 in Hardcover by Hiram Garcia may be ordered in bulk quantities. Minimum starts at 25 copies. Availability based on publisher status and quantity being ordered.
View AllClose

Zane Grey: His Life, His Adventures, His Women

MSRP:
Now: $27.95
Was:
Zane Grey was a disappointed aspirant to major league baseball and an unhappy dentist when he belatedly decided to take up writing at the age of thirty. He went on to become the most successful...

Garfield Sings for His Supper: His 55th Book

Diego Rivera: His World and Ours

MSRP:
Now: $17.95
Was:
This charming book introduces one of the most popular artists of the twentieth century, Diego Rivera, to young readers. It tells the story of Diego as a young, mischievous boy who demonstrated a...

Dear Jesus: Seeking His Life in Your Life

MSRP:
Now: $15.99
Was:
From your heart's deepest cry to life's joyful praises, nothing is off limits to Jesus. Knowing Jesus on a deeper, more personal level means sharing all aspects of your life with Him…every day. In...

A Color of His Own [Hardcover]

MSRP:
Now: $12.95
Was:
Elephants are gray. Pigs are pink. Only the chameleon has no color of his own. He is purple like the heather, yellow like a lemon, even black and orange striped like a tiger! Then one day a chameleon...

MSRP:
Now: $14.95
Was:
A New York Times Notable Book of the Year “A remarkable book that could very well change the way we think about poverty in the United States.” — New York Times Book Review “Powerful . . . Presents a...

MSRP:
Now: $27.95
Was:
A groundbreaking work of history that explicates Thomas Jefferson’s vision of himself, the American Revolution, Christianity, slavery, and race. Thomas Jefferson is often portrayed as a hopelessly...

MSRP:
Now: $27.00
Was:
New York Times bestselling author Deepak Chopra unlocks the secrets to moving beyond our present limitations to access a field of infinite possibilities. How does one do this? By becoming metahuman. ...

Just Money: Mission-Driven Banks and the Future of Finance

MSRP:
Now: $17.95
Was:
How to use finance as a tool to build a more equitable and sustainable society. Money defines our present and will shape our future. Every investment decision we make adds a chapter to the story...

Beginners: The Joy and Transformative Power of Lifelong Learning

MSRP:
Now: $26.95
Was:
"Beginners is ultimately about more than learning. It's about the possibilities that reside in all of us." -- Daniel H. Pink, New York Times best-selling author of When, Drive, and To Sell is...

MSRP:
Now: $21.27
Was:
This exclusive Go-Giver journal is entirely natural and sustainable, made from apple peels and recyclable leather. The large apple pages, measuring 7 11/16 x 9 15/16 inches, allow for long-term...