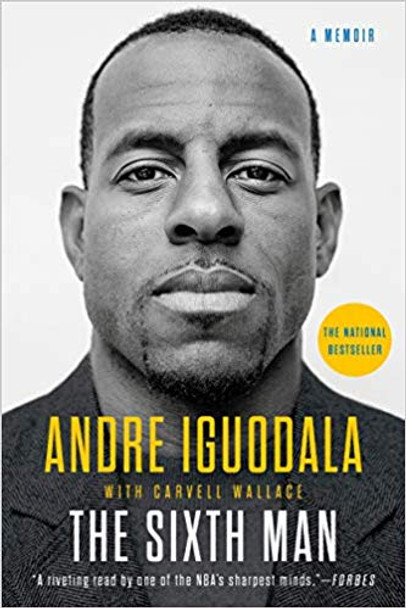 Andre Iguodala is one of the most admired players in the NBA. And fresh off the Warriors’ third NBA championship in the last four years, his game has never been stronger.

Off the court, Iguodala has earned respect, too—for his successful tech investments, his philanthropy, and increasingly for his contributions to the conversation about race in America. It is no surprise, then, that in his first book, Andre—with his cowriter Carvell Wallace—has pushed himself to go further than he ever has before about his life, not only as an athlete but about what makes him who he is at his core.

The Sixth Man traces Andre’s journey from childhood in his Illinois hometown to his Bay Area home court today. Basketball has always been there. But this is the story, too, of his experience of the conflict and racial tension always at hand in a professional league made up largely of African American men; of whether and why the athlete owes the total sacrifice of his body; of the relationship between competition and brotherhood among the players of one of history’s most glorious championship teams. And of what motivates an athlete to keep striving for more once they’ve already achieved the highest level of play they could have dreamed.

On drive, on leadership, on pain, on accomplishment, on the shame of being given a role, and the glory of taking a role on: This is a powerful memoir of life and basketball that reveals new depths to the superstar athlete, and offers tremendous insight into most urgent stories being told in American society today.

The book, The Sixth Man: A Memoir [Bulk, Wholesale, Quantity] ISBN# 9780525533993 in Paperback by Andre Iguodala may be ordered in bulk quantities. Minimum starts at 25 copies. Availability based on publisher status and quantity being ordered.
View AllClose

Idea Man: A Memoir by the Cofounder of Microsoft

MSRP:
Now:
As low as
Was:
A compulsively readable, remarkably candid memoir from world class ultra-marathon runner Charlie Engle chronicling his globe-spanning races, his record-breaking run across the Sahara Desert, and how...

The Sixth Man: A Memoir

MSRP:
Now:
As low as
Was:
The standout memoir from NBA powerhouse Andre Iguodala, the indomitable sixth man of the champion Golden State Warriors. Andre Iguodala is one of the most admired players in the NBA. And fresh off...

A Visible Man: A Memoir

MSRP:
Now:
As low as
Was:
From one of fashion's most important changemakers, a memoir of breaking barriers When Edward Enninful became the first Black editor in chief of British Vogue, few in the world of fashion wanted...

MSRP:
Now:
As low as
Was:
**A 2019 OWL AWARD SHORTLIST WINNER IN THE ELEMENTARY CATEGORY**An incredible memoir from Sharon Robinson about one of the most important years of the civil rights movement. In January 1963, Sharon...

MSRP:
Now:
As low as
Was:
**A 2019 OWL AWARD LONGLIST WINNER IN THE SALES & MARKETING CATEGORY**What’s the one critical networking skill that can make or break your career? Your ability to Get the Meeting!...

MSRP:
Now:
As low as
Was:
Get out your silliest nouns, verbs, adjectives, and adverbs! Young and old alike will laugh out loud as ?the world's greatest word game? hits new heights of hilarity. Hot on the heels of Mad Libs?...

MSRP:
Now:
As low as
Was:
Bruce's home is already a full house. But when a big storm brings all his woodland neighbors knocking, he'll have to open his door to a crowd of animals in need of shelter-whether he likes it or...

MSRP:
Now:
As low as
Was:
Gossip Girl meets Get Out in Ace of Spades, a YA contemporary thriller by debut author Faridah Àbíké-Íyímídé about two students, Devon & Chiamaka, and their struggles against an anonymous bully...