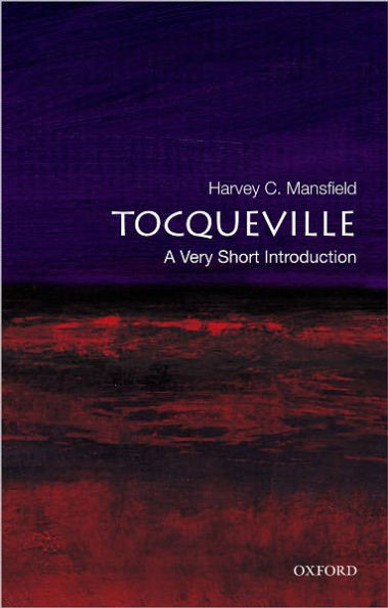 No one has ever described American democracy with more accurate insight or more profoundly than Alexis de Tocqueville. After meeting with Americans on extensive travels in the United States, and intense study of documents and authorities, he authored the landmark Democracy in America, publishing its two volumes in 1835 and 1840. Ever since, this book has been the best source for every serious attempt to understand America and democracy itself. Yet Tocqueville himself remains a mystery behind the elegance of his style. Now one of our leading authorities on Tocqueville explains him in this splendid new entry in Oxford's acclaimed Very Short Introduction series. Harvey Mansfield addresses his subject as a thinker, clearly and incisively exploring Tocqueville's writings--not only his masterpiece, but also his secret Recollections, intended for posterity alone, and his unfinished work on his native France, The Old Regime and the Revolution. Tocqueville was a liberal, Mansfield writes, but not of the usual sort. The many elements of his life found expression in his thought: his aristocratic ancestry, his ventures in politics, his voyages abroad, his hopes and fears for America, and his disappointment with France. All his writings show a passion for political liberty and insistence on human greatness. Perhaps most important, he saw liberty not in theories, but in the practice of self-government in America. Ever an opponent of abstraction, he offered an analysis that forces us to consider what we actually do in our politics--suggesting that theory itself may be an enemy of freedom. And that, Mansfield writes, makes him a vitally important thinker for today. Translator of an authoritative edition of Democracy in America, Harvey Mansfield here offers the fruit of decades of research and reflection in a clear, insightful, and marvelously compact introduction.

MSRP:
Now:
As low as
Was:
“One day. . . I went to school. I came home. The end,” says our storyteller—a girl with a busy imagination and a thirst for adventure. The art tells a fuller tale of calamity on the way to school and...

MSRP:
Now:
As low as
Was:
Hinduism is practised by nearly eighty per cent of India's population, and by some seventy million people outside India. In this Very Short Introduction, Kim Knott offers a succinct and authoritative...

MSRP:
Now:
As low as
Was:
The Tudors: A Very Short The monarchs of the Tudor period are among some of the most well-known figures in British history. John Guy presents a compelling and fascinating exploration of the Tudors in...

MSRP:
Now:
As low as
Was:
Fresh off a memorable exchange at the Kavanaugh hearings, the senator from Minnesota is trying to bring pragmatism back to the White House. But is that what wins elections—especially versus Donald...

MSRP:
Now:
As low as
Was:
Invisible Man is a milestone in American literature, a book that has continued to engage readers since its appearance in 1952. A first novel by an unknown writer, it remained on the bestseller list...

What Happens When You Are Born and Grow?

MSRP:
Now:
As low as
Was:
Well-annoted diagrams and vibrant photographs show both the internal and external workings of each system. This book compares humans with animals and provides fun health tests and checks. It is ideal...

The Art of Being Indispensable at Work: Win Influence, Beat Overcommitment, and Get the Right Things Done

MSRP:
Now:
As low as
Was:
What's the secret to being indispensable—a true go-to person—in today's workplace? With new technology, constant change and uncertainty, and far-flung virtual teams, getting things done at work is...

MSRP:
Now:
As low as
Was:
A voter’s playbook on making a difference in the 2020 election and beyond from the most recognized and most successful political strategist in the country If you’ve asked yourself the question,...