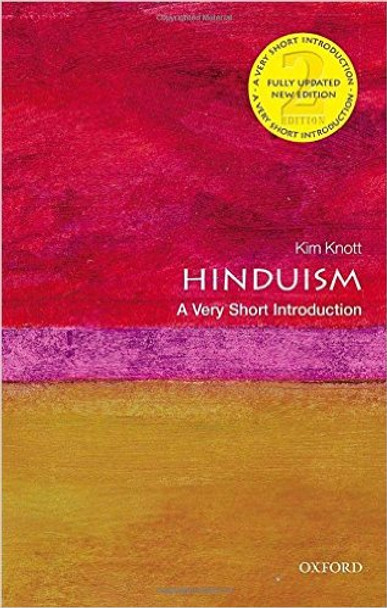 Hinduism is practised by nearly eighty per cent of India's population, and by some seventy million people outside India. In this Very Short Introduction, Kim Knott offers a succinct and authoritative overview of this major religion, and analyses the challenges facing it in the twenty-first century. She discusses key preoccupations of Hinduism such as the centrality of the Veda as religious texts, the role of Brahmins, gurus, and storytellers in the transmission of divine truths, and the cultural and moral importance of epics such as the Ramayana. In this second edition Knott considers the impact of changes in technology and the flourishing of social media on Hinduism, and looks at the presence of Hinduism in popular culture, considering pieces such as Sita Sings the Blues. She also analyses recent developments in India, and the impact issues such as Hindu nationalism and the politicization of Hinduism have on Hindus worldwide.

The book, Hinduism: A Very Short Introduction [Bulk, Wholesale, Quantity] ISBN# 9780198745549 in Paperback by Kim Knott may be ordered in bulk quantities. Minimum starts at 25 copies. Availability based on publisher status and quantity being ordered.
View AllClose

MSRP:
Now:
As low as
Was:
“One day. . . I went to school. I came home. The end,” says our storyteller—a girl with a busy imagination and a thirst for adventure. The art tells a fuller tale of calamity on the way to school and...

MSRP:
Now:
As low as
Was:
No one has ever described American democracy with more accurate insight or more profoundly than Alexis de Tocqueville. After meeting with Americans on extensive travels in the United States, and...

MSRP:
Now:
As low as
Was:
The Tudors: A Very Short The monarchs of the Tudor period are among some of the most well-known figures in British history. John Guy presents a compelling and fascinating exploration of the Tudors in...

Vegan, at Times: 120+ Recipes for Every Day or Every So Often

MSRP:
Now:
As low as
Was:
An all-new collection of more than 120 recipes that are so delicious and easy to make, you might forget they’re vegan, from the #1 New York Times bestselling author of Deceptively Delicious, Double...

Another Kind of Madness: A Journey Through the Stigma and Hope of Mental Illness [Paperback]

MSRP:
Now:
As low as
Was:
WINNER: Best Autobiography/Memoir, 2018 Best Book Awards, sponsored by American Book Fest. Glenn Close says: "Another Kind of Madness is one of the best books I’ve read about the cost of stigma and...

MSRP:
Now:
As low as
Was:
Called "The Black Pope" by many of his followers, Anton La Vey began the road to High Priesthood of the Church of Satan when he was only 16 years old and an organ player in a carnival: "On Saturday...

MSRP:
Now:
As low as
Was:
Thomas Rockwell's deliciously disgusting and enduring classic joins the Scholastic Gold line, now with exclusive bonus materials! Billy isn't one to back down from a bet. But this one is gross: If he...

The Comeback: How Today's Moms Reenter the Workplace Successfully

MSRP:
Now:
As low as
Was:
Myth: “My kids will suffer if I work full time.” Reality: Your kids will be fine. In fact, the example you set by going back to work may leave them better off. Myth: “No company will want me...

MSRP:
Now:
As low as
Was:
This informational text provides many opportunities to build domain-specific vocabulary and to introduce some basic concepts of life science and earth science. The book, Worms, Worms, Worms ( Rosen...

MSRP:
Now:
As low as
Was:
The ultimate annual book of records is back and crammed with more than ever before! Guinness World Records 2017 is bursting with exciting all-new records on topics as diverse as black holes, domes,...

No Grain, No Pain: A 30-Day Diet for Eliminating the Root Cause of Chronic Pain

MSRP:
Now:
As low as
Was:
In the tradition of Wheat Belly and Grain Brain; No Grain, No Pain demonstrates the proven link between a gluten-heavy diet and chronic pain and discomfortâand offers a groundbreaking, 30-day,...

MSRP:
Now:
As low as
Was:
Breastfeeding may be natural, but it may also be more challenging than you expect. Some mothers encounter doubts and difficulties, from struggling with the first few feedings to finding a gentle and...

MSRP:
Now:
As low as
Was:
Lavishly illustrated and super-condensed, Architecture: A World History is the perfect gift for any architecture buff. In this pocket-sized book bursting with 600 illustrations, page after page is...