Tomorrow's Capitalist: My Search for the Soul of Business 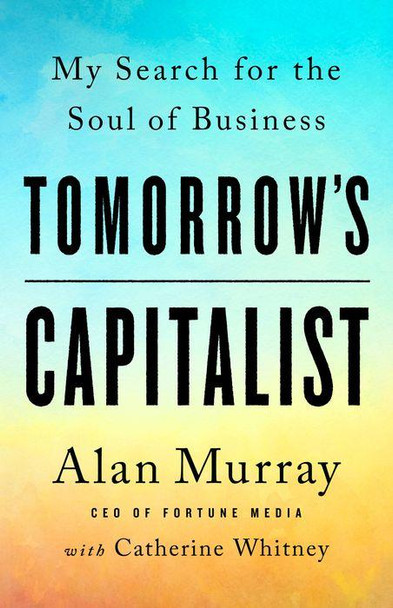 Tomorrow's Capitalist: My Search for the Soul of Business

A new dawn for capitalism: America's corporate leaders are at the pragmatic center of a movement for social and economic progress in an era of political and cultural change. The core tenets of a capitalist system that dominated the world for more than a century are being challenged as never before. Narratives about the failures of capitalism, the greed of the 1%, and the blindness of corporations to public need have made their mark and are driving change. Not the superficial cosmetic fixes that generated so much cynicism in the past, but a revolution in the way corporations are imagined and run. Tomorrow's Capitalist is a report from the front lines on how corporate CEOs--the ultimate pragmatists--realize that they could lose their "operating license" unless they tackle the fundamental issues of our time: climate; diversity and inclusion; and inequality and workforce opportunity. Responding to their employees and customers who are demanding corporate change, they have taken the lead in establishing some bold new principles promoting "stakeholder" capitalism, ensuring that for the first time in more than a half a century, it's not just shareholders who have a say in how corporations are run. Stakeholder capitalism is not a panacea. Greed is inherent in human nature and corporate corruption will always be with us. But the new direction in governance is a real and compelling dynamic that is transforming much of corporate America today. Tomorrow's Capitalist vividly captures the zeitgeist.
View AllClose

Highest Duty: My Search for What Really Matters

MSRP:
Now:
As low as
Was:
On January 15, 2009, the world witnessed a remarkable emergency landing when Captain "Sully" Sullenberger skillfully glided US Airways Flight 1549 onto the Hudson River, saving the lives of all 155...

Salt in My Soul: An Unfinished Life

MSRP:
Now:
As low as
Was:
The diaries of a remarkable young woman who was determined to live a meaningful and happy life despite her struggle with cystic fibrosis and a rare superbug—from age fifteen to her death at the age...

The Enlightened Capitalists: Cautionary Tales of Business Pioneers Who Tried to Do Well by Doing Good

MSRP:
Now:
As low as
Was:
An expert on ethical leadership analyzes the complicated history of business people who tried to marry the pursuit of profits with virtuous organizational practices—from British industrialist Robert...

Sully: My Search for What Really Matters

MSRP:
Now:
As low as
Was:
Now a major motion picture from Clint Eastwood, starring Tom Hanks—the inspirational autobiography by one of the most captivating American heroes of our time, Capt. ‘Sully’ Sullenberger—the pilot who...

MSRP:
Now:
As low as
Was:
In Mission-Driven Leadership, Mark Bertolini, the long-time chairman and CEO of Aetna, the Fortune 500 health insurance company, reveals that genuine leadership is not about dollars and market share...

Sir Callie and the Champions of Helston

MSRP:
Now:
As low as
Was:
In a magical medieval world filled with dragons, shape-shifters, and witches, a twelve-year-old nonbinary hopeful knight battles for the heart of their kingdom. A thrilling middle-grade series opener...

The New Normal in It: How the Global Pandemic Changed Information Technology Forever

MSRP:
Now:
As low as
Was:
Learn how IT leaders are adapting to the new reality of life during and after COVID-19 COVID-19 has caused fundamental shifts in attitudes around remote and office work. And in The New Normal in...

When They Win, You Win: Being a Great Manager Is Simpler Than You Think

MSRP:
Now:
As low as
Was:
From the legendary Silicon Valley manager who partially inspired Radical Candor, the three simple rules for creating happy, engaged teams. Employees are miserable because managers are failing…and no...

MSRP:
Now:
As low as
Was:
Jennie's favorite aunt is sending her a new hat, and Jennie is sure it will be beautiful. But when the box arrives, the hat inside is very plain. She had imagined a wonderful hat with big colorful...

MSRP:
Now:
As low as
Was:
Muhammad Yunus, the Bangladeshi economist who invented microcredit, founded Grameen Bank, and earned a Nobel Prize for his work in alleviating poverty, is one of today's most trenchant social critics...

MSRP:
Now:
As low as
Was:
The book, Dinosaur Discoveries [ Bulk Wholesale Quantity ] ISBN 823420302 in Paperback by Gibbons, Gail may be ordered in bulk quantities . Bulk book availability based on publisher status and...

MSRP:
Now:
As low as
Was:
The Balanced Scorecard translates a company's vision and strategy into a coherent set of performance measures. The four perspectives of the scorecard--financial measures, customer knowledge, internal...

MSRP:
Now:
As low as
Was:
A BookPal Staff Pick for May 2021 Executive coaches and #1 bestselling authors of All In and The Carrot Principle offer insight and advice in this practical eight-step guide both managers and...

Quiet Strength: The Principles, Practices, and Priorities of a Winning Life

MSRP:
Now:
As low as
Was:
Visit coachdungy.com to pre-order your copy and for release information! Tony Dungy's words and example have intrigued millions of people, particularly following his victory in Super Bowl XLI, the...

The Snowflake: A Water Cycle Story (A Millbrook PR Lib)

MSRP:
Now:
As low as
Was:
With a double-page spread for each month, this book describes the journey of a single drop of water throughout the year. The book, The Snowflake: A Water Cycle Story (A Millbrook PR Lib) [Bulk,...