Unfollow: A Memoir of Loving and Leaving Extremism 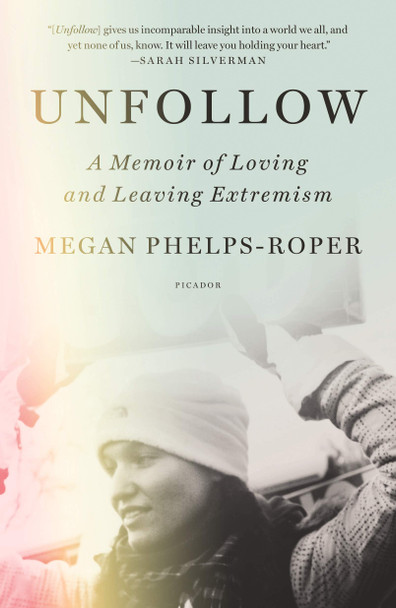 Unfollow: A Memoir of Loving and Leaving Extremism

At the age of five, Megan Phelps-Roper began protesting homosexuality and other alleged vices alongside fellow members of the Westboro Baptist Church in Topeka, Kansas. Founded by her grandfather and consisting almost entirely of her extended family, the tiny group would gain worldwide notoriety for its pickets at military funerals and celebrations of death and tragedy. As Phelps-Roper grew up, she saw that church members were close companions and accomplished debaters, applying the logic of predestination and the language of the King James Bible to everyday life with aplomb―which, as the church’s Twitter spokeswoman, she learned to do with great skill. Soon, however, dialogue on Twitter caused her to begin doubting the church’s leaders and message: If humans were sinful and fallible, how could the church itself be so confident about its beliefs? As she digitally jousted with critics, she started to wonder if sometimes they had a point―and then she began exchanging messages with a man who would help change her life.

A gripping memoir of escaping extremism and falling in love, Unfollow relates Phelps-Roper’s moral awakening, her departure from the church, and how she exchanged the absolutes she grew up with for new forms of warmth and community. Rich with suspense and thoughtful reflection, Phelps-Roper’s life story exposes the dangers of black-and-white thinking and the need for true humility in a time of angry polarization.

The book, Unfollow: A Memoir of Loving and Leaving Extremism [Bulk, Wholesale, Quantity] ISBN# 9781250758033 in Paperback by Megan Phelps-Roper may be ordered in bulk quantities. Minimum starts at 25 copies. Availability based on publisher status and quantity being ordered.
View AllClose

Unfollow: A Memoir of Loving and Leaving the Westboro Baptist Church

MSRP:
Now:
As low as
Was:
At the age of five, Megan Phelps-Roper began protesting homosexuality and other alleged vices alongside fellow members of the Westboro Baptist Church in Topeka, Kansas. Founded by her grandfather and...

The School of Greatness: A Real-World Guide to Living Bigger, Loving Deeper, and Leaving a Legacy

MSRP:
Now:
As low as
Was:
When a career-ending injury left elite athlete and professional football player Lewis Howes out of work and living on his sister's couch, he decided he needed to make a change for the better. He...

Searching for Sunday: Loving, Leaving, and Finding the Church

MSRP:
Now:
As low as
Was:
From New York Times bestselling author Rachel Held Evans comes a book that is both a heartfelt ode to the past and hopeful gaze into the future of what it means to be a part of the Church. Like...

The Art of Leaving: A Memoir

MSRP:
Now:
As low as
Was:
An intimate memoir in essays by an award-winning Israeli writer who travels the world, from New York to India, searching for love, belonging, and an escape from grief following the death of her...

Unfollow Me: Essays on Complicity

MSRP:
Now:
As low as
Was:
An intimate, impertinent, and incisive collection about race, progress, and hypocrisy from Jill Louise Busby, aka Jillisblack. Jill Louise Busby spent years in the nonprofit sector specializing in...

MSRP:
Now:
As low as
Was:
The only complete Anne of Green Gables box set! Makes a great gift and is a must-have for any longtime reader or fan of the Netflix series Anne with an E. Favorites for nearly 100 years, these...